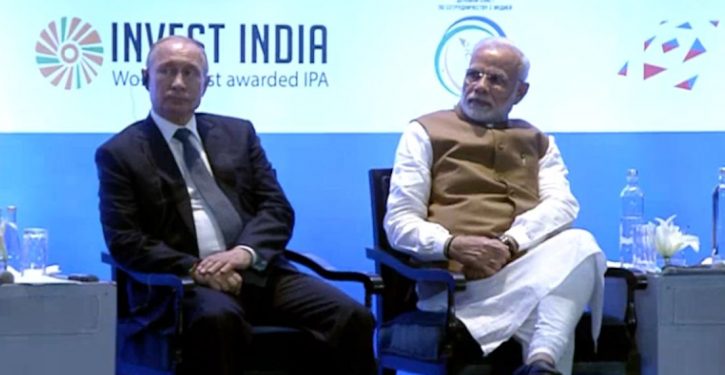 China and India may pay lip service to free trade. But they often engage in protectionism themselves. They do so even though past policies of protectionism slowed India’s economic growth, and contributed to India falling behind other countries that once were poorer than it.

The hypocrisy of India’s Prime Minister is described in an October 2018 report from the Cato Institute:

At the 2018 Davos meeting of the World Economic Forum, Indian prime minister Narendra Modi made a stirring plea for globalization and open trade, implicitly attacking the “America First” policies of the Trump administration. He said, “Many countries are becoming inward focused and globalization is shrinking, and such tendencies can’t be considered lesser risks than terrorism or climate change.” Modi’s speech…echoed similar pro-globalization statements made by Chinese president Xi Jinping. Some theorists began to speculate on the possibility that India and China would keep the world open and globalized in the 21st century even as the United States turned inward.

Alas, such theorizing was revealed as wishful thinking a few weeks later when India’s budget for 2018-2019 was presented. It raised import duties on 40-odd items “to provide adequate protection to domestic industry” and “promote creation of more jobs.”

The language of the budget speech was not cloaked by any subterfuge: it was nakedly protectionist, …Duties were raised by 15-20 percent on items as varied as auto parts, candles, kites, sunglasses, lamps, cigarette lighters, toiletries, toys, watches, footwear, and furniture. The duty on fruit juices and miscellaneous processed foods went up to the range of 25-50 percent. India itself is a substantial exporter of some of these items … and that made the selection of protected items puzzling…In July 2018, the government increased the import duties on 76 textile items and followed up with increased duties on 328 textile items the next month. It also appointed a task force under the cabinet secretary, the senior-most civil servant, to look into ways of reducing import dependence. The stated aim is brazenly protectionist.

Such protectionism is a retreat from India’s opening of itself to more international trade since 1991. Prior to 1991, India had pursued protectionism for decades, in policies that backfired and fueled cronyism, corruption, and stagnation. Those policies “created uncompetitive high-cost industries that harmed consumers and investors alike,” notes the Cato Institute’s Swaminathan Anklesaria Aiyar.

The U.S. is also unlikely to benefit from protectionist trade policies, both because they trigger trade wars and retaliation from other countries, and because many manufacturers themselves rely on imported raw materials or components to produce manufactured goods for the U.S. and world market.

Recently, trade wars with China left farmers in the Midwest poorer, and contributed to the GOP losing several House seats in the 2018 Congressional elections. Recent steel tariffs ended up harming U.S. manufacturers who rely on steel as an input, the way automakers do. The GOP lost three of the five Congressional districts most reliant on steel as an input for manufacturing, as judged from the number of steel tariff exclusion requests.

Protectionism is a bad thing: Freer trade has been critical in reducing costs to consumers and reducing global poverty. It has expanded U.S. agricultural exports, helping farmers and the states they live in. Freer trade has also boosted economic growth in the U.S., allowing manufacturers to obtain needed raw materials and components more cheaply.