Hey, Whaddayaknow! Slowly but surely, liberals are beginning to figure out that the Women’s March is actually run by notorious Jew-haters.

The FES, a think tank for Germany’s Social Democratic party, was set to award the Women’s March its Human Rights Award. But not anymore.

Germany's Friedrich Ebert Foundation, linked to the Social Democratic Party, suspends award to Linda Sarsour's @WomensMarch over antisemitism concerns. "After careful consideration, the Executive Board decided to suspend the award ceremony, and to have the matter investigated…" pic.twitter.com/edAvsVIey0

This is not the first time the Women’s March has come under fire from liberals.

Actresses Debra Messing and Alyssa Milano have both announced that they will no longer work with the Women’s March.

It turns out that not only is notorious terror-apologist and Muslim activist Linda Sarsour a chief leader of the Women’s March, but the group’s founder, Tamika Mallory, has been found to be an ardent supporter of virulent anti-Semite Louis Farrakhan.

Alyssa Milano says she will not speak at the next Women's March as long as Linda Sarsour and Tamika Mallory remain a part of the leadership and refuse to condemn Louis Farrakhan's anti-semitism. https://t.co/GvrrZ5fyPy

I stand with you @Alyssa_Milano https://t.co/FKN31ApXnU

I hate to say it, but I agree with Messing and Milano about the Women’s March organizers being anti-Semitic.

It’s true that NY Sen. Gillibrand’s friend and Women’s March organizer Tamika Mallory was at Louis Farrakhan’s hate-fest this past March.  And she’s been a fan of Farrakhan for a long time: 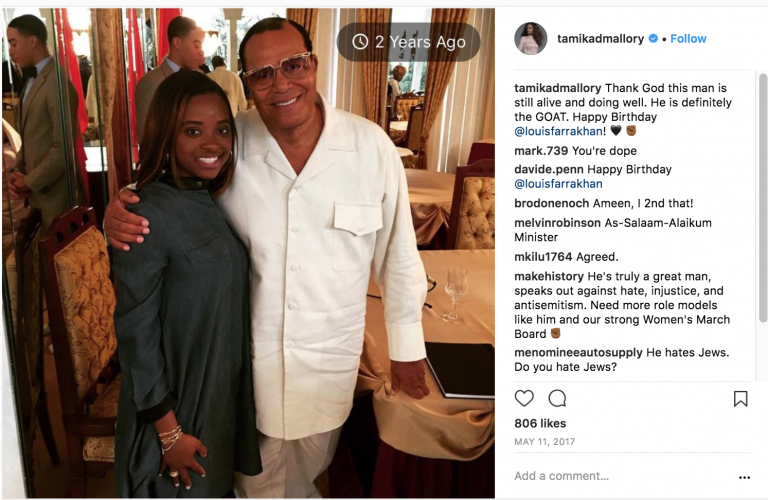 At the end of May, Tamika Mallory spoke via video at an event hosted by her trip’s sponsor, the Center for Constitutional Rights. Her anti-Semitic friends Farrakhan and Sarsour must have been proud when Mallory opined that the very creation of Israel was a human rights crime.

She might claim her statement wasn’t anti-Semitic, only anti-Israel. But per the U.S. State Department definition, Mallory was indeed spewing Jew-hatred.  As posted on the Department’s website in 2016:

“Manifestations might include the targeting of the state of Israel, conceived as a Jewish collectivity. However, criticism of Israel similar to that leveled against any other country cannot be regarded as anti-Semitic.” Among the examples, the State Department included as anti-Semitic was, “Denying the Jewish people their right to self-determination, e.g., by claiming that the existence of a State of Israel is a racist endeavor.

When Starbucks planned its afternoon of anti-bigotry training, it included the progressive politics organization The Anti-Defamation League as a contributor. But Tamika called for a boycott of Starbucks for including the very liberal ADL. She wanted Starbucks to include organizations such as Jewish Voice for Peace (JVP) – which was named by the ADL as one of the ten most anti-Israel organizations in the country – and the now-infamous group Bend The Arc. The other groups recommended are just as bigoted as JVP.

#Starbucks is NOT serious about doing right by BLACK people! #boycottstarbucks pic.twitter.com/cjpDAXesCC

Linda Sarsour, the anti-Semite supported by Democrats such as New York’s Governor Cuomo and like Tamika Mallory, is supported by Senator Gillibrand.

Sarsour spoke at and participated in a Nation of Islam event in 2015, and she once responded to Farrakhan’s putrid hatred with a glowing post on fellow Women’s March organizer Carmen Perez’s Facebook page, praising Farrakhan’s youthful demeanor.

Linda Sarsour claims Zionists cannot be feminists. “It just doesn’t make any sense for someone to say, ‘Is there room for people who support the state of Israel and do not criticize it in the movement?’ There can’t be in feminism. You either stand up for the rights of all women, including Palestinians, or none. There’s just no way around it,” Sarsour said. But she doesn’t support Jewish women having rights.

Much of modern antisemitism is different from the traditional Jew-hatred.  It is disguised as anti-Zionism, and claimed to be just criticism of Israel.  In 2009, while Barack Obama was president, the U.S. State Department defined antisemitism. The list is long, but the items include denying the Jewish people their right to self-determination, and denying Israel the right to exist (promoting Israel’s right to exist is also known as Zionism).

Sarsour favors a one-state solution where an Arab majority and a Jewish minority would live together within the borders of a single country. She made clear her opposition to Israel’s existence as a Jewish state when she tweeted in October 2012 that “nothing is creepier than Zionism.”

Sarsour also supports the anti-Semitic Boycott, Divestment & Sanctions (BDS) movement, an initiative that uses various forms of public protest, economic pressure, and court rulings to advance the agenda of permanently destroying Israel as a Jewish nation-state.  The Democratic Party-protected anti-Semite falsely  maintains that a “Palestine existed before the State of Israel.”

Another Women’s March organizer, Carmen Perez, is also a fan of Farrakhan. In this picture from her Instagram account Perez (on the right) honored the hater as a valued elder.

Perez has also posted videos of Farrakhan’s rantings on her Instagram, here and here for example.

When the ADL asked Ms. Perez about her association with Farrakhan, Perez refused to denounce his anti-Semitism and instead retorted: “There are no perfect leaders.” In other words, “Of course he is a hater, but who cares.”

Women’s March founder Rasmea Yousef Odeh is no longer in America; she was deported in October 2017 for concealing her murder/conviction of two Israeli college students.

Rasmea Yousef Odeh is one of the eight women who organized the original March 2017 Women’s March. She’s also a woman who spent a decade in an Israeli jail for her involvement in two terrorist bombings while she was a member of the Popular Front for the Liberation of Palestine (PFLP). One of those attacks, a 1969 bombing of a Jerusalem Super-Sol Market, killed two Hebrew University Students, Edward Joffe and Leon Kanner, while they were shopping for groceries. 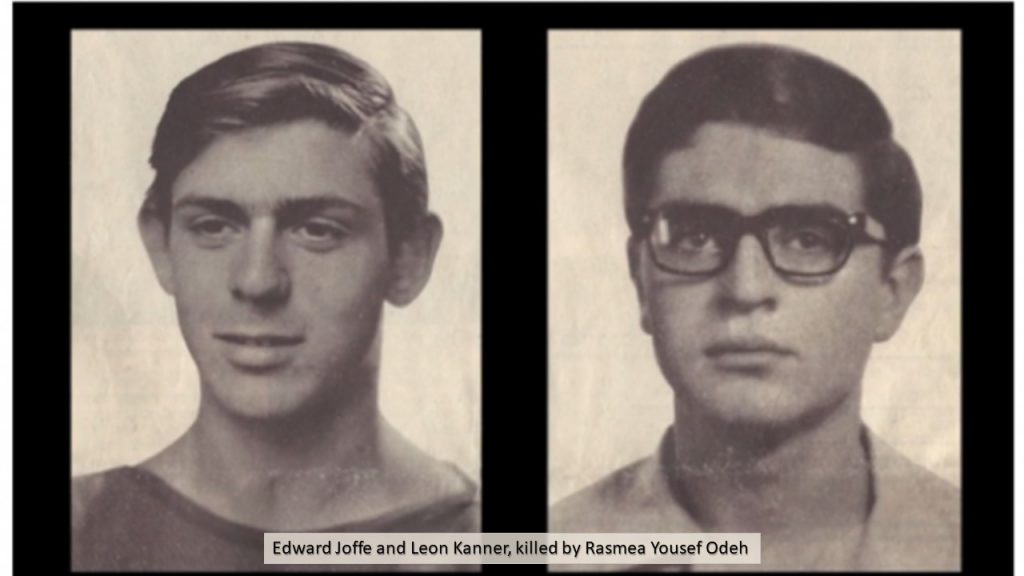 The Palestinian-born Odeh was sentenced to life in prison for being the ringleader behind the Super-Sol bombing, as well as an attempted bombing of the British Consulate in Jerusalem (the bomb was found and disarmed before exploding). After spending ten years in an Israeli jail, Odeh was released with 77 other terrorists in an exchange with the PFLP for an Israeli soldier captured in Lebanon.

After her release from prison the terrorist eventually moved to the United States, where she served as the associate director of the Arab American Action Network in Chicago, and later as an Obamacare navigator (snark withheld).

Odeh became a citizen in 2004, but in 2014 she was convicted of lying to the immigration authorities about her Israeli conviction. Odeh checked “no” on immigration and citizenship forms she filled out when asked whether she had ever been convicted of a crime. She was also accused of lying in her immigration papers about her prior residency, falsely claiming that she had lived in Jordan from 1948 until she came to America.

The above are just a few examples of the anti-Semitic hatred running through the Women’s March movement.  While many believe the Women’s March group was founded to garner more rights for women, the truth is that it was established by terrorists and anti-Semites. And in some cases, there is Antisemitism at the events.  It’s a rare occasion when these words are published in one of my posts: “I agree with Debra Messing and Alyssa Milano.” And it this one case, you should too.

Think about their leadership before you participate in the next Women’s March next event. Unless you agree with their anti-Semitism, you probably should not associate with such a group. 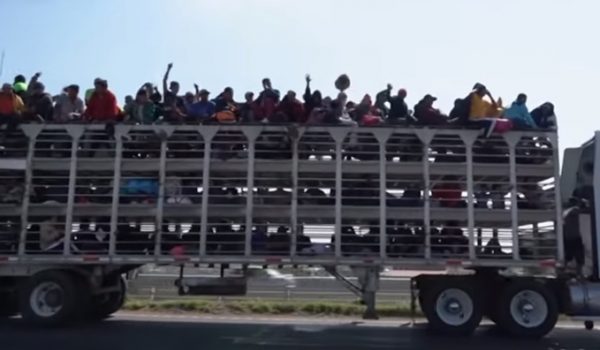 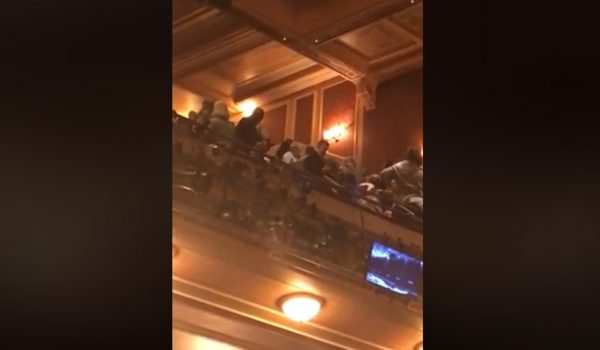