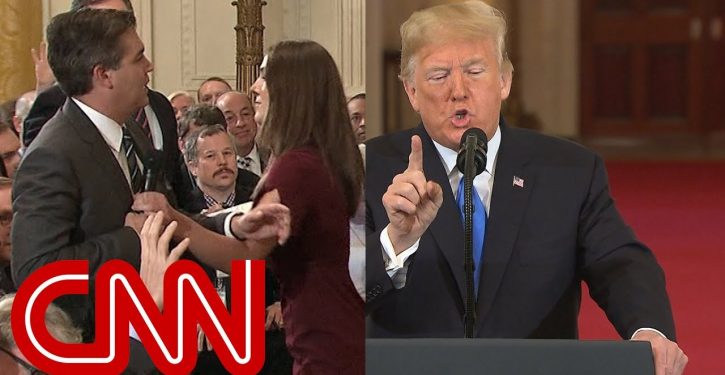 A federal judge ruled on Friday that the White House must reinstate Jim Acosta’s “hard pass” for press access to events at the White House.  The hard pass, which allows routine access (rather than requiring event-by-event approval), was revoked last week after Acosta monopolized a microphone, physically deflected an intern’s attempt to retrieve it from him, persistently interrupted the president, and wouldn’t allow an orderly transition to questions by other reporters.

CNN then sued the White House in federal court to get the press pass for Acosta back.  The judge, Timothy Kelly, was appointed by Trump.  He ordered the pass temporarily reinstated while the suit goes forward, emphasizing that his order does not imply a ruling on the case or on any reference to First Amendment rights.

CNN also made a Fifth Amendment claim that Acosta had been improperly detained by the Secret Service without due process notice of the basis for or purpose of the action.  That appears to be the foundation for Judge Kelly’s reinstatement of the hard pass:

[T]he judge didn’t rule on the underlying case, he ordered Acosta’s pass returned for now in part because he said CNN was likely to prevail on its Fifth Amendment claim — that Acosta hadn’t received sufficient notice or explanation before his credentials were revoked or been given sufficient opportunity to respond before they were.

We still await developments in Acosta’s own suit against Trump, noted by Howard Portnoy on Wednesday, in which Acosta alleges that the president has “damaged his future career prospects.”

A couple of observations on this reinstatement ruling.  One is that its narrowness doesn’t actually mitigate the damage it can do down the road.  If everyone who has been removed for unruly behavior from a government-related event can claim that his Fifth Amendment rights were violated, that will mean that citizens trying to participate in a good-faith town hall meeting with their representatives have no recourse when shrieking activists disrupt the proceedings for everyone.

Is it seriously in the judge’s mind that the only way to protect Fifth Amendment rights is to publish rules of behavior for every such event, affirmatively ensure there’s evidence that everyone knows what they are, and then go through some specialized “due process” ritual for removing people who scream and act out?

You know leftist activists as well as I do.  That will be the only standard that would keep them from prevailing in lawsuits.  But it’s a prohibitive standard, one that simply makes town halls and other forms of public access to government officials less frequent and less likely for everyone.

This reinstatement ruling is not one we should be comfortable with.  Unless the entire Fifth Amendment argument is overruled as the case moves forward, this problem of the badly behaved ruining things for everyone else will metastasize.  When you have to start writing rules because people don’t voluntarily adhere to universal social custom, harmony evaporates and the opportunity for useful, positive group interactions shrinks drastically.  Accommodating the badly behaved instead of ejecting them quickly limits what everyone can do as a group.  We all know how that works — from our days in grade school.

The second observation is that, if there’s a basis for arguing that Fifth Amendment rights aren’t really at issue here, there is also a remedy for the problem of judges ruling as if they are.  Congress has the constitutional authority to limit what the federal courts can rule on.  Perhaps it would be a good idea to consider doing that.  For starters, I’m not a fan at all of a judge being able to order the reinstatement of any kind of pass suspended by one of the co-equal federal branches.  We are sitting still for too much of this; it is improper, period, to see federal judges as the final arbiters of every question, whether in government or any other aspect of life.

Congress’s own ox could well be gored by a ruling like this one, after all.  It’s doubtful that documented regulations for behavior in venues on the Hill would invariably meet a court’s standards better than the White House’s reasoning for having Acosta removed by the Secret Service.

Should it really be necessary to develop a special, dedicated due process for removing unruly people from events in the White House?  What kind of absurd mindset about law’s nature and purpose have we entered, when the absence of such a regulatory package is held to endanger Fifth Amendment rights?

Whatever we want to call it, however, the Trump White House is reportedly preparing to meet the judge’s requirement.  They’re writing rules of behavior, according to the president’s comments Friday morning.

“We’re doing that, we’re going to write them up right now,” Trump told Wallace. “It’s not a big deal and if he misbehaves we’ll throw him out or we’ll stop the news conference.”

Pushing for specifics, Wallace asked if certain things are going to be considered “over the line” and Trump reiterated that these new rules are being written now, but that they will cover “decorum” and outline that reporters “can’t keep asking questions.”

“We had a lot of reporters in that room, many many reporters in that room and they were unable to ask questions because this guy gets up and starts, you know, doing what he’s supposed to be doing for him and for CNN and, you know, just shouting out questions and making statements, too,” Trump said, referring to Acosta refusing to give up a mic during a briefing last week, which led to the revocation of his White House access.

We’re not going to like this better.  It amounts to regulating down to the miscreant’s level, instead of requiring him and his organization to live up to the standard of the well-behaved majority, who don’t need to have the basic rules of human propriety written down for them.

The White House being cornered and forced to do it means everything is going to get worse.  Any experienced public school teacher can tell you that.  I guess, as with so many things, Americans are just going to have to learn that the hard way.

Anatomy of a Broward County voter
Next Post
Rep. Eric Swalwell (D-CA): If Americans fight back against gun confiscation, feds can nuke them