On Wednesday, shortly after word went out that Michael Avenatti had been arrested and was facing charges of felony domestic violence, the anti-Trump attorney released a statement protesting his innocence. The statement concluded with the ironic observation that “any accusations to the contrary are fabricated and meant to do harm to my reputation.”

So Michael Avenatti is aware that accusations made without proof can unjustly damage a person’s reputation. Who would have guessed? Here’s the same Avenatti not so long ago seeming to argue that innuendo was enough practically for a conviction. At the time, of course, he was a surrogate for the accuser, not the accused. Watch, beginning at 14:10 (transcript follows):

Chris Cuomo: If you make accusation or allegation the bar of whether you stay or go, Michael, what does that set up for the future?

Michael Avenatti: That’s a very good point, Chris, but I think we’re beyond that from what I understand relating to the lie-detector test being passed, which of course is not admissible in a court of law. … [Emphasis added]

By his own admission, a polygraph test has no legal standing, yet that and a bunch of unsubstantiated claims were enough for Avenatti to join Democrats on the Senate Judiciary Committee in declaring Brett Kavanaugh guilty of sexual abuse.

But let’s not forget: Avenatti was more than just a casual observer offering his considered legal opinion in this case. He represented a plaintiff in the person of Julie Swetnick, who accused Kavanaugh of participating in a gang rape of her and other young girls. Her claim was rejected after evidence surfaced that she herself had “engaged in unwelcome sexual innuendo and inappropriate conduct” at a job years earlier.

Now Avenatti will be looking for and will receive due process. He will be presumed innocent unless and until he can be proved guilty in a court of law. In the court of public opinion, the same Democratic senators who embraced Avenatti’s “witness” will now change their tune and also accord him the presumption of innocence — a right they did not extend to Brett Kavanaugh.

Can you say hypocrite?

Sounds like fraud: Feds are probing election documents altered by Democrats in 4 Florida counties
Next Post
Cartoon of the Day: The ‘good hands’ people 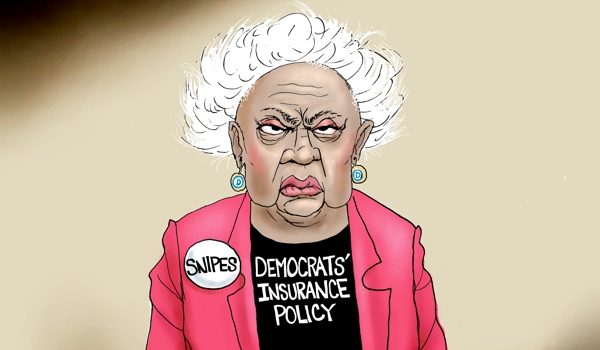