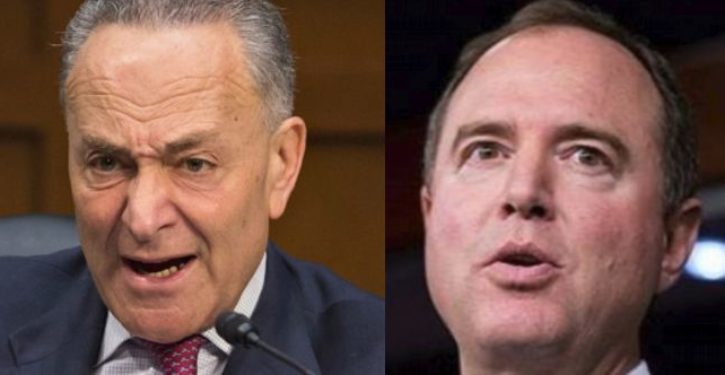 We keep hearing that Special Counsel Robert Mueller is expected to publish his findings from the “Russia” investigation very soon.  Just this evening, journalist Sara Carter said on Fox News that a concluding report from Mueller is widely anticipated within weeks, if not days.  There are numerous reports, like this one from ABC last week, that Mueller is writing his final report.

If the Mueller probe is concluded before the Christmas holidays, however, the question arises what the Democrats’ (and other Trump critics’) purpose is in seeking to “protect” it.  The unspoken implication about this is that the investigation would be “protected” when the new Congress is seated in January.  All commentary on the matter is written with that as the tacit premise – and much of it has that as an explicit, forthright premise.

No one speaks of protecting the Mueller investigation as if it’s about blocking Trump from ending the probe this fall, before Mueller can present the findings reportedly being composed right now.

Yet after those findings are presented, what “protection” would be needed for the investigation?  Is the idea to keep it hanging around, its job already completed, in case something else comes along?

As silly as that sounds, the recent reporting about the Democrats’ “subpoena cannon” indicates that it’s apparently what they have in mind.

Beyond the subpoena cannon, we can note that MSM reports on Mueller’s wrap-up activities are now emphasizing (like ABC’s above) that the “timeline for submission is unclear.”  That doesn’t have any obviously honest implication.  There is no valid reason for Mueller to wait until the new Congress has been seated to present his findings, if he’s already got them written up in November or December.  Unnecessary delay would have a manifestly partisan motive.

But the subpoena cannon is a clearer indicator.  If you hadn’t thought about it, think about it now.  The Democrats in Congress want to “protect” the Mueller investigation so they can leverage it, even as a spent shell with no further underlying purpose, to mount political attacks on the Trump administration.

What exactly is it they want to do?  Rep. Adam Schiff, presumably the incoming chairman of the House Intelligence Committee, explained that to Axios in his “subpoena cannon” interview with them for their article on Monday 12 November.  Schiff has a very specific plan (bold in original):

Schiff, the top Democrat on the Intelligence Committee, told us he wants to help special counsel Robert Mueller and plans to release — with some redactions of classified material — transcripts of dozens of interviews the committee conducted during its own Russia probe.

In other words, Schiff wants to manufacture more process crimes by keeping an idle Mueller on retainer and turning over transcripts of closed-door interviews for Mueller to find discrepancies in.

The purpose of “protecting” the Mueller investigation is thus to ensure that there’s a hunter waiting with a big perjury trap and authority to obtain indictments.  It wouldn’t be about finding out anything new.  It would be about looking for conflicts, however minor, in the testimony given by witnesses: to Mueller, and separately to Congress.

The House doesn’t need Mueller still being funded in order to use his findings to launch impeachment proceedings, or to hold its own series of additional hearings on whatever topics it chooses related to Mueller’s findings.

The House only needs Mueller in his special counsel role in order to hold the direct threat of perjury-trap indictments over witnesses.

It will be instructive to see what Mueller does in the coming days.  There has been too much reporting that he’s ready to wrap things up, for an unexplained delay to pass the smell test.  If Mueller has a motive to accommodate the incoming Democratic majority in the House, we may suddenly hear that there are new avenues of the probe being pursued, or something along those lines.

But the bottom line is that the timing is peculiar for the incessant theme about protecting the Mueller probe.  The theme reads like a preemptive campaign, as if to make it seem untimely if Mueller himself wraps up the probe and presents his findings before January, when the House Democrats could start to make use of him for their own purposes.

Schiff’s purpose is apparently wholly punitive: to manufacture perjury raps against previous witnesses.  But as nauseating as the prospect is, even that would have a silver lining.  If Mueller does close his investigation and file his report this fall, a great deal about what actually happened in 2016 will go unexplored and unaired.

On the other hand, if the House has Mueller to keep throwing “evidence” at for the next year, we are likely to experience what we’ve been seeing all along: far greater exposure of the Obama administration, Hillary Clinton, the Democrats’ national organization, and foreign meddling by parties like British and Australian “elites,” than of anything Trump or his campaign staff did.