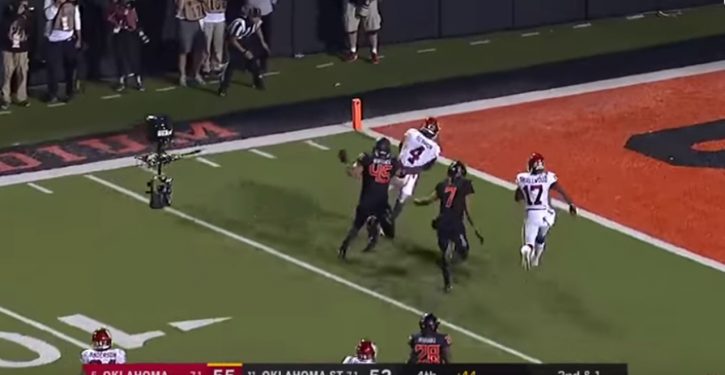 It hasn’t been a really gratifying ¡MAC Olé! experience so far this week, with Toledo putting one in the Not-So-Hot column working the Wednesday Night circuit at Northern Illinois.

But we would most certainly have watched the Battle of the Bricks — Ohio at Miami (OH) — if anyone had been broadcasting it here.  We congratulate Miami (OH) for toting home the column-mounted brick, one of our most beloved Storied Rivalry trinkets.  Don’t bother us with your cannons and your broken chairs.  Any fool can knock up a golden egg on a piece of wood.  It takes a special slant of mind to appreciate the humble brick, to the extent of wanting to play three hours of football for one on a chilly fall night.

We prefer stucco ourselves, as a siding material.  But we admire the commitment to the architectural theme, and keep reminding ourselves to research where this unsuspected depth comes from in our countrymen from the Buckeye State.

The University of Tulsa, which beat Notre Dame 28-27 on 30 October 2010, beat UConn last week, like, scary-bad (49-19).  We’re tickled to death, but not overinterpreting that blip on the landscape. Neither are the oddsbubbas, who have Memphis giving 15 in tomorrow’s game with the Golden H in Liberty Bowl Memorial.  Nice to see Tulsa post another W though.

Oklahoma, #6 because they haven’t slipped through the drain trap again, is polishing the silver to play host to Oklahoma State in Bedlam! on Saturday afternoon.  We’d refer to it more traditionally as BEDLAM!!!!!!!!!!!!!!!!!! except that it’s being played at the totally wrong time, and nothing about this week feels BEDLAM-y with the game looming in less than 24 hours.  Don’t even ask us to deal. BEDLAM belongs at the end, all things decently and in order, as God intended.  It’s like if it were 1975 and Oklahoma were playing Nebraska in September or something.

Anyway, it’s a great Storied Rivalry, and it will be interesting to see if either defense can stop anything at all.  On the “probably not” theory, we see the OU offense being the Decider-in-Chief, although the Cowboys always manage to do something annoying, and we’re leery of the 21 points the oddsquad has the Sooners spraying around.

Navy’s in the grip of a peculiar melancholia (we diagnose quarterbackitis), succumbing last week to Cincinnati, 42-0, and facing another tough slog at #12 Central Florida on Saturday.  The 2-7 Mids are playing for honor now.  UCF is favored by 24.5.

In a hard-fought match, Army topped Air Force last week for the block in the tic-tac-toe line.  Now it’s down to The Game in December, when Navy will have a last chance to make it a winning season.  Army’s task on Saturday is to host and defeat Lafayette (FCS, Patriot League), which seems, respectively, inevitable, barring an act of God, and likely.

Air Force (3-6) entertains New Mexico (3-6) Saturday afternoon, giving 13.5.  We are relieved to report that Aurora the falcon, the senior AFA mascot, is recovering from her injuries suffered during an Army prank at West Point last week.

We feel sure the cadets are in a better frame of mind now:

Army’s used to mules. What can we say.

We’re too nice to suggest that Virginia Tech has fallen through the drain trap, but we have to acknowledge that the youth and inexperience are making themselves felt.  The 4-4 Hokies are off to take on division-leading Pitt (5-4), which at least gratified us by prevailing over the Yahoos last Friday.  Pitt’s giving 3.5 in a late-afternoon meet at Heinz Field.

Nevada is still 5-4, even after a week off, and has a late-night home stand against Colorado State coming up on Saturday.  We’re not convinced about the 14-point Wolf Pack give, necessarily, but we do think they’ve got a good shot at running the table to a quality Booger Bowl.  They’ll finish out the season playing San Jose State and – of course – flea-infested UNLV in Rivalry Week.

#7 LSU is smarting after a tough loss to Alabama, but gets to play for the gaudiest trophy in football on Saturday, heading to Fayetteville for the Storied Rivalry with Arkansas.  We couldn’t love the fabled Golden Boot more if it were on casters and used as a drinks cart at Mar-A-Lago.

All things being equal, LSU ought to cover the 12-point give.  Any chip on the Zouave shoulder should be a more-than-equalizer.

TCU edged out Kansas State ever so slightly last week, and is 4-5 heading off to a major test at #9 West Virginia, pride of the Big 12, in the early slot on Saturday.  The Mountaineers are favored by 11, which sounds about right in Morgantown.

Kansas State, edged out and 3-6, hosts the Storied Rivalry match with Kansas (motto: “What difference, at this point, does it make?”) on Saturday morning.  Now and then the 3-6 Jayhawks go on a toot and give everyone a shock, but in the usual course of things, we’d expect K-State to cover their 10.5 points.  We’ll be anticipating the update from the Northwest concession booth.

Toledo, as mentioned, took a hit Wednesday night and sits at 5-5 heading into the home stretch.  The Rockets have next Kent State coming up next Thursday.

Wyoming is hanging in there at 4-6 after taking out San Jose State 24-9.  The Pokes are off this week, with Air Force on the horizon next Saturday.

#1 Alabama gives 24 hosting #16 Mississippi State, a game the sportsbabblers will hyperventilate over because they’re being paid to.  #2 Clemson is at #17 (yeah, right) Boston College for the marquee game on Saturday night, giving 19.5.

#3 Notre Dame is favored by a mere 16 hosting Florida State, which seems stingy, given the massive fade by the ‘Noles in 2018.  #4 Michigan is at Rutgers giving 39.

#8 Washington State is favored by only 6 over Colorado (motto: “We take a pounding!”), which speaks in a voluminous and informative manner for those who know how to read the PAC-12 signage.

And #10 Ohio State gives 3.5 at #18 Michigan State, which definitely has the potential to be a good game.  The Buckeyes need to whale one out of the park here.  We’re not feeling it, truth to tell, and obviously neither are the bettors. But then, they never do.  The Ohio State bettors don’t look from out here like a real fun crowd.

There’s not a lot of Storied Rivalry action this weekend, but what there is is cherce. (Identify the character and the movie for 25 bonus LU points.)

North Carolina is at Duke (-10) to play for a Victory Bell (which, we confess, Oklahoma and Oklahoma State are also playing for; we think Wal-Mart must have had a big Price Rollback on a slew of them 40 years ago), and we certainly wish them good fortune.

#11 Kentucky will be at Tennessee for their very Storied Rivalry, an august series stretching back to 1893 and numbering 113 games.  The Wildcats give 4.5.

Beyond the rivalries, we love that Liberty, now in the Bigs, is visiting Virginia (-23.5), and BYU (-14) will be at UMass, which sounds just crazy enough to work.  #19 Texas gets its shot at Texas Tech in Lubbock, with the Horns giving 1.5.  Could be good football.  Cal heads to USC (-5) Saturday night, if you’re into that sort of thing.

In FCS, McNeese State has slipped to #18 after a seemingly unnecessary loss to Southeastern Louisiana.  The Pokes will be in Natchitoches Saturday evening to take on Northwestern State, a Southland opponent sporting a 3-6 record.  Northwestern State, you’ll remember, is enriched by the presence of the ghost Isabella, whose lifetime achievements included becoming a nun and stabbing herself to death.  On a happier note, however, one of NSU’s most notable alumni is Ed Orgeron, head coach of the LSU football team.

A bit on the chilly side, Natchitoches will see temps subsiding into the 40s under cloudy skies for the 6 PM kickoff.

In Div II, Slippery Rock cruised over Gannon 48-7, and has us all loud and proud anticipating the PSAC championship game with West Chester U., the Div II #9-ranked team, in Slippery Rock on Saturday.  The Rock finished the regular season 9-1.  The Golden Rams are 9-0.

The football weather couldn’t be finer, with a high right about freezing and a winter-mix precip forecast for the 1 PM game start.

UCO has surged to 7-3 after shwacking Northeastern State all over the field (62-0) in President’s Cup action last week.  The Bronchos import their final season rival, Emporia State, from Emporia, Kansas for the Saturday game.  The Hornets come in 6-4; the conditions look to be bright and clear with a high touching 50 for the 2 PM game start.

In Div III, Rose-Hulman fell to Hanover and a 4-5 record last week, but gets a last season shot hosting Earlham College (Richmond, IN) on Saturday.  Earlham’s Quakers are 0-9 and boast 49 total points on the season, so RHIT has a good chance of a .500 finish.  Expect sunny and mid-30s for the 1:30 PM kickoff in Terre Haute.

Christopher Newport is 6-2 after knocking off The College of New Jersey 38-13 on the road, and heads into the final weekend preparing to host Wesley College (Dover, DE).  The visiting Wolverines are 6-3 and no pushovers, so it should be a good final game.  The high will graze 50 on Saturday, with partly cloudy skies at the game time of 1 PM in Pomoco.

Merchant Marine rolled 44-10 over Catholic U. last week, and wears a 7-1 record proudly hosting Coast Guard on Saturday for their epic rivalry game.  It should be a barnburner; Coast Guard is downright non-shabby this year at 6-3, with a real passing game and a respectable defensive backfield.  ESPN3 will stream it starting at noon Eastern; mid-40s with lowering clouds will prevail throughout. 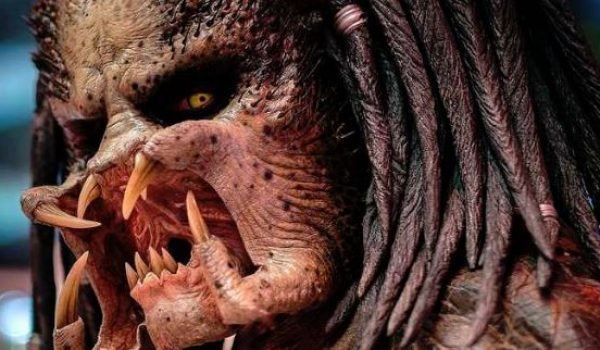 If polling is an art, 2018 was a year for the ugly
Next Post
Dems slam Trump for denying asylum to illegals, but they once sang a different tune