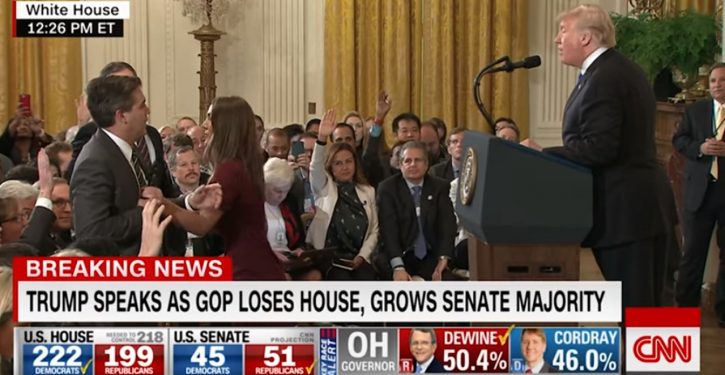 Is the media’s role in public life to actively prevent government officials from conducting press conferences as they see fit, and try to usurp the talking time so that other members of the press aren’t able to ask their own questions?

These are the questions that arise after CNN reporter Jim Acosta did both of those things on Wednesday, and subsequently had his White House press pass suspended.

As described earlier, the incident itself was typical of Acosta.  He got hold of the microphone used by reporters to ask their questions, interrupted and talked over President Trump, began lecturing Trump on what he should call the Central Americans coming north through Mexico in the “caravans,” and wouldn’t relinquish the microphone when told his turn was over.

What seemed to tip the scales against Acosta on Wednesday was an attempt by a White House intern to take the mic from him when he kept going after Trump said he was taking other questions.  Acosta deflected the intern’s hand, held onto the mic, and just kept talking.

“President Trump believes in a free press and expects and welcomes tough questions of him and his Administration,” said Sanders in a statement this evening. “We will, however, never tolerate a reporter placing his hands on a young woman just trying to do her job as a White House intern. This conduct is absolutely unacceptable.”

Naturally, Deadline made this about how forcibly Acosta interacted with the intern.

Here’s the video. (The exchange with the intern starts at about the 1:20 mark.)

You decide how you feel about the level of physical force.  I think some on the right have exaggerated the egregiousness of this as a physical interaction.

But Acosta accused Sanders of “lying” in her announcement about his White House suspension, and the actual point is that he did, in fact, physically reject the intern’s very proper attempt to do her job.  Her job was to take the microphone from Acosta because the president had said Acosta’s turn was over, and he – the president – would be entertaining the next question.  Someone else would need the mic.

Acosta refused to behave in an orderly manner and allow the president to continue his press conference.  That’s why the press pass was suspended.

Observing this White House move, many readers will probably think, “What took them so long?”  On our own pages, LU contributor Rusty Weiss opined a couple of weeks ago that revoking Acosta’s press pass was exactly what the White House should do.

Given Acosta’s history of disruptive grandstanding during White House press conferences, the rhetorical question is a legitimate one.  The Trump White House has been remarkably patient with Acosta, a reporter who has frequently tried to extend his disruption of White House events, sometimes shouting out of order until directed to leave.

Acosta seems to imagine his role on the model of Alinskyite “community organizing,” in which activists hijack the events of public officials in order to derail the officials’ agendas and use the officials as props for the activists’ own political theater.

Is that the role the media are supposed to play?  Keep in mind that the people elect their key public officials.  Trump was elected president, which is how he came to be conducting press conferences as if their purpose is for him to communicate with the people.  The purpose of press conferences is not for Jim Acosta to accuse the president of failing to agree with Jim Acosta.

When Acosta prevents the president from communicating, he’s doing the opposite of his job.  If Americans ever elect Acosta to public office, it will be time for us to focus on what Acosta thinks on public issues, and how he would frame them.  Until then, what we actually need to hear is what Trump thinks and says.  Trump is the one we’re paying to do the big job for us.

People have varying opinions about how pleasant or gratifying that is, but that’s not actually the point.  The point, if the media want to “keep Trump accountable,” is for the people to see and hear Trump.

So when other reporters chime in with pronouncements that Trump is doing violence to freedom of the press by suspending the access of an unruly reporter, it rings hollow.

This just in from @CNNPR: "This unprecedented decision is a threat to our democracy and the country deserves better. Jim Acosta has our full support." https://t.co/IoOsMoVH0i

News the White House pulled Jim @Acosta’s credentials is not an attack on one journalist but all of the press. There should be complete solidarity. This is a moment for any Republican who says they believe in the Constitution to stand up.

Acosta manifestly wasn’t there to do his legitimate job: to make sure the scouring sunlight of coverage is on Trump, revealing who Trump is.  Acosta was there to make sure that what came across on camera was who Acosta thinks Trump is.

That’s what talking-head segments and editorial pages are for.  The media can convey their own opinions all they want.  But it’s not their job to broadcast their opinions to the exclusion of what the president or his spokespeople have to say, during the press conferences the American people elected the president to run, and are footing the bill for.

The people elected the president, and he and his aides are the ones engaged on the people’s specifically chartered business.  The media aren’t there to thwart or artificially manufacture our view of what these public officials are doing.

A great day for criminals at the polls
Next Post
VIDEO: Behar — women who support Trump can’t tell a predator from a protector