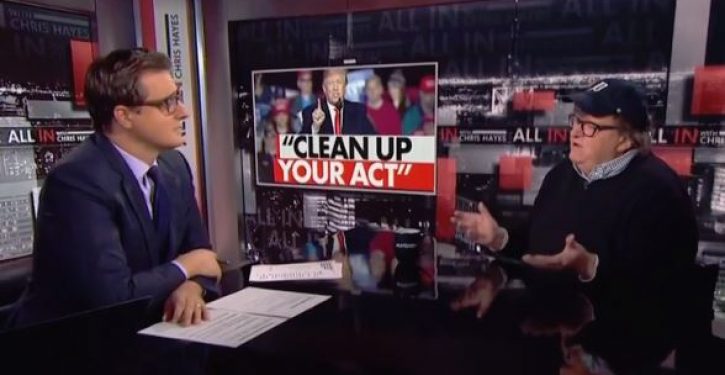 How tone-deaf is the Left? An answer to that question was provided indirectly by a segment on MSNBC’s “All in with Chris Hayes” last Wednesday that featured far-left filmmaker Michael Moore.

The subject of the segment was then-still-at-large mail bomber and whether his actions were motivated by Donald Trump’s incendiary rhetoric. To provide further context, it should be noted that this interview came at a time when the president was making broad appeals for unity — and being rebuffed for the same.

Against this backdrop, Hayes asked Moore: “You hear people talking about people need to tamp down the rhetoric on both sides, you hear that a lot, and unity. We need more unity. What do you think about that?”

Moore’s answer was “Well no, first of all, our side needs to rev it up, and we need to fight for these things that we feel strongly about.”

Hayes, evidently recognizing the danger of seeming to condone violence on live television jumped in and specified “Nonviolently just to be clear?” which led Moore to make the absurd statement, “Of course we are nonviolent people. Nonviolent democracy-based cures is what we stand for.”

Smashing people in the heads with bike locks and threatening harm to motorists who don’t cater to your whims at a traffic intersection are not indicators of “nonviolent people.”

But Moore wasn’t quite finished making a fool of himself:

Our problem has been we are always too kind of wishy-washy sometimes, or let’s compromise, let’s reach out, let’s extend the olive branch. And you know the other side, like as Steve Bannon has said, we go for the head wound. See we are not “head wound” people, but what he says about us is that we like to have pillow fights, and pillow fights are not going to get us what we need to get.

It’s a pity Hayes and his network couldn’t provide more than echo chamber to this sorry display of self-delusion.