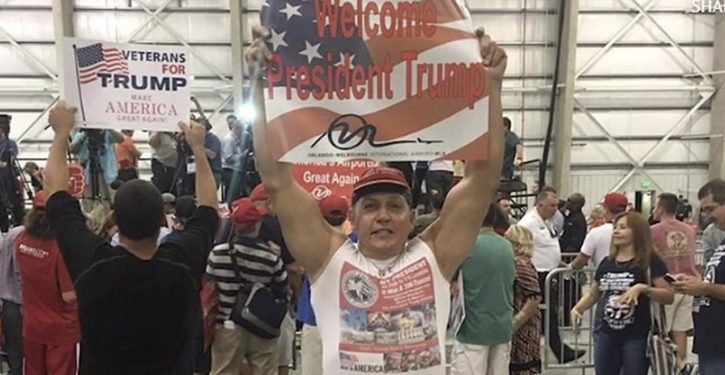 Sayoc, in a shirt that looks screen-printed with images like the ones on his van, at Trump rally at Orlando Melbourne Airport. Miami Herald video, Cesar Sayoc image via social media

Liberty Unyielding’s Ben Bowles started a good list on Saturday of questions about Cesar Sayoc, the man arrested for this week’s spate of defective parcel bombs.

Most were about the parcel-mailing incidents themselves and the circumstances reported around Sayoc, such as his oddly decorated van.

Looking more closely at Sayoc doesn’t improve the “adds up” factor.  Many commentators (me among them) concluded pretty quickly that Sayoc must be mentally unstable.  But if we take his social media profiles at face value, he’s not the only one.  It has to seem like a lot of people who knew this guy were either unstable too, or had no idea whatsoever whom they were associating with and/or endorsing.

You wouldn’t gather this from the media coverage so far, but the depiction of Sayoc as a career criminal, failed small business owner, loser on all fronts, and loner whackjob doesn’t comport with his apparently documented history of working in recent years as an event promoter with a Florida casino.  Aside from a number of photos with other employees and clients, posted on social media, his LinkedIn profile actually looks pretty normal, at least at a superficial level.

There’s the fact that he has dozens of endorsements from people with their own legitimate LinkedIn accounts, for “Marketing,” “Entertainment,” “Marketing Strategy,” “Brand Management,” “Customer Service,” and other skills.  I didn’t check out everyone who endorsed him, but a cross-sample of 10 accounts showed that these are, to all appearances, actual LinkedIn users with actual profiles and professional backgrounds.

The endorsement rosters are heavy on realtors and small entrepreneurs.  But that’s about what you would expect for someone working a promotions niche in a particular part of Florida.  (Some of the connections may be through Sayoc’s mother, who served as the president of her building’s condo board for nearly a decade and seems to have been pretty active in that role.  But even when your mother’s connections are helping you get endorsements, the endorsers still have to be willing to do it.)

On the other hand, there’s Sayoc’s statement in the LinkedIn profile about his interest in veterinary medicine and his family antecedents, which is so incoherent as to be almost unreadable. (Punctuation original.)

Career decision of becoming a Horse Doctor was always a love for animals, which were here first and never do anything to anyone. And respect all living things. My family very sound Sayoc name in Medical field Grandfather Col. Baltazar Zook Sayoc that perfect the conversion oriental eye to Americanize. The first plastic surgeon to be observed by 8 million people in NY city Hospital. He over through Communist Philippines liberated island. He built all hospitals in Philippines islands and sets standards highest level. Most surgeon use his instruments which are patented. And a lot surgeon use today. Also Sayoc intl. schools marshals arts Kali that used to over throw communist party . Also one 5 Hero’s disciplinary my mother Madeline Sayoc Giardiello First president Pharmacy Cosmetic Association, Who Who Business Women of Year, Soul buyer consultant for Home Shopping Network, head number 1 marketing consul in World Aventura Marketing consul, up for city counsel women Aventura,

This incoherence is a pattern in his other social media profiles as well.  Sayoc was reportedly born in Brooklyn in 1962 and raised in the U.S., so the speculation I’ve seen that English isn’t his first language doesn’t seem to fit.  His spoken English in videos seems to be fine.

Perhaps he has a disorder that affects reading and writing.  The LinkedIn statement reads a lot like something passed through Google Translate or a similar auto-translator, but the weird capitalization doesn’t seem characteristic of that.

If Sayoc has significant communication problems (which would be immediately apparent in emails and texting), that doesn’t appear to have deterred a bunch of people from endorsing him for a variety of business skills.  Nor does his apparently documented history of criminal arrests going back to the 1990s.

Interestingly, in spite of the arrests and the rap sheet, Sayoc has never actually been convicted of a felony.  That’s why he is eligible to be a registered voter.  The Miami Herald had ground truth on that on Friday:

This isn’t the first time Sayoc has been connected to a bomb threat. In 2002, he called FPL [Florida Power & Light] because he was upset about the amount of his bill, court records show. “The defendant then stated that he didn’t deserve it and that he was going to blow up FPL,” according to files released by the Miami-Dade State Attorney’s Office.

“FPL will get what they deserve and will be worse than 9/11,” Sayoc said, according to the case notes.

Sayoc also told an FPL employee that he “was going to blow her head off,” according to the case file. The call was recorded and Sayoc was later arrested by state law enforcement agents. He was sentenced to one year of probation. …

The case, however, did not make Sayoc a convicted felon or bar him from voting. He received a “withhold of adjudication,” which means the case did not technically count as a felony conviction.

(He pleaded to the count, basically, and was awarded the “withhold of adjudication” pending probation and staying clean.)

The MSM have been almost universally depicting Sayoc as a felon.  Which is somewhat understandable, given the numerous arrests, but nevertheless sloppy – and comes across as opportunistic.

The Miami Herald report highlights another feature in the odd mix of contradictions.  At the time of his arrest this week, Sayoc the event promoter with the extensive list of endorsements for “Marketing” from solid citizens was “working as a part-time DJ and weekend bouncer at a West Palm Beach strip club, according to the Palm Beach Post.”

This seems to fit with Sayoc’s history of performing as a male dancer and managing male revues on a traveling basis.  It doesn’t obviously fit the nature of the LinkedIn profile.

Much of this seems “off” when compared to the overheated political commentary in Sayoc’s Facebook posts and tweets in 2016.  The 2016 entries show an apparently rabid support for Trump.  It’s a strange, incoherent support, however.

An investigative reporter who was able to save off Sayoc’s Facebook page before it was deleted discovered that the 2015 posts convey a picture of Sayoc that may be convincing to some on the left, but won’t be convincing at all to the great majority of Trump voters.

Sayoc posted meme images showing George W. Bush with blood on his hands, for example, and ghoulish depictions of Bush and Cheney as complicit in trading “blood for oil.”  There’s 9/11 “Trutherism” in the mix.  Some on the left may like to believe that this is characteristic of Trump supporters, but it manifestly is not.  It’s as characteristic of Trump supporters as it is of Bernie Sanders and Hillary Clinton supporters; i.e., there’s a fringe there, but it’s tiny, and not representative.

Moreover, the reporter, Shad Olson, includes a series of images posted in 2016, on one of which Sayoc calls Code Pink protesters “liberal women” … “the beautiful women of the world.”

To caption that group of images, on 19 July 2016, Sayoc referred to Trump as “President Donald J Trump.” The full caption reads (sic sempre):

As Ben pointed out, the Seminole Nation has disavowed any connection with Cesar Sayoc.  (His LinkedIn statement appears to acknowledge his paternal heritage from the Philippines.)

And as Shad Olson points out, the Facebook entry is dated 19 July 2016, when Trump was not the president.

That date fell during the Republican convention in Cleveland, so perhaps Sayoc was showing an extreme susceptibility to suggestion.  Trump was probably called “the next president of the United States!” a number of times on that day.

Olson also discovered that Sayoc posted a video of his now-infamous white van on 28 August 2016 – completely free of Trump stickers.  Olson finds it interesting that at the height of the 2016 campaign, MAGA-cap-wearing Sayoc didn’t have stickers on the van.

Olson’s account of the shifting evidence on Sayoc’s party registration (see Ben’s post) is worth checking out as well.  LU contributor Jeff Dunetz has the Florida record showing that Sayoc registered as a Republican on 4 March 2016.  But many Internet sleuths reported that Sayoc’s original MyLife entry listed him as a Democrat on Friday morning.  The MyLife entry was then changed dozens of times within moments.  Olson watched that pattern live, at the time, and gives approximate time hacks for his findings.

Assuming everyone is correct here, the sensible explanation on Sayoc is that he changed his registration from Democrat to Republican in March 2016.  The prompt and numerous changes to the MyLife record, at the time Sayoc’s name had just been announced on 26 October 2018, may or may not require explanation, depending on which observer you are.

The conclusion that Sayoc is just a nut, with a history of steroid abuse and exotic dancing, and serious problems of communication, impressionability, and impulse control, seems to be the one that demands the fewest answers.  It does seem to fit his scattered, itinerant, and irregular history.

There are two big things that conclusion doesn’t fit, however, besides the appearance of that LinkedIn profile.  One is the nature of the average Trump supporter.  This is only really a problem for those – like MSM pundits – who are trying to make defective-parcel-bomb campaigns a symptom of Trump and Trump support.  But it’s a big problem.  Sayoc isn’t typical of anything political, and certainly not Trump supporters.

The other thing it doesn’t fit is assembling and mailing the defective bombs.  Sayoc avoided becoming a convicted felon in 2002 in large part because he had no “bomb-making expertise.”

So far, no information has emerged that would suggest he has improved that capability since 2002.  That doesn’t mean he didn’t make the defective pipe bombs.  His DNA on the packaging apparently indicates that he prepared one of them for mailing, at the very least.  But it does mean his verbal threat 16 years ago to blow up a utility employee isn’t a smoking gun.  And it’s another contradiction in a strange profile.  As with the mass shooter in Las Vegas in 2017, we may never get answers to all the questions that are raised by this event.