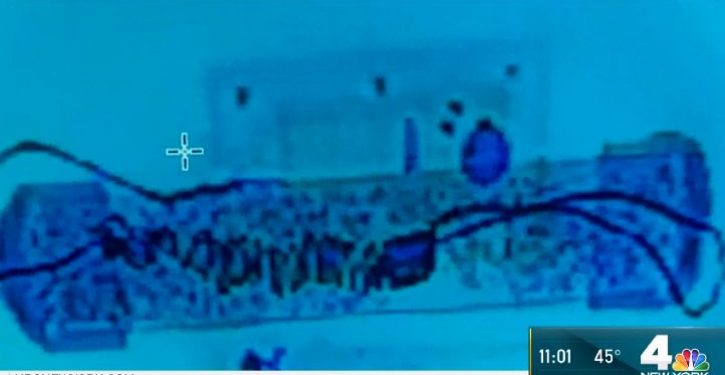 [Update from Adam Housley in center text below. – LU Staff]

It probably won’t come as a surprise to those who have been following this story closely that investigators are now saying at least some of the “mail bombs” sent to high-profile Democrats were incapable of exploding.

According to multiple news sources, including NBC, AP, and Fox News, the “bombs” were constructed with missing elements that meant they could not actually explode.  NBC and AP (cited by RedState here) both reported that this applied to some of the bombs, with others yet to be evaluated.

According to Adam Housley, none of the bombs was delivered capable of going off.

So here is the clarification on semantics on all this: the FBI Lab will@make the final call on all of these. So far the belief is that they all didn’t go off by design. They were all missing a couple of components.

So here is the clarification on semantics on all this: the FBI Lab will@make the final call on all of these. So far the belief is that they all didn’t go off by design. They were all missing a couple of components.

**UPDATE* As of Thursday night: Adam Housley says he is still hearing that every “bomb” was missing components needed to make it operational — but the bombs weren’t missing the same components.

Still being told every single bomb was missing components..not all the same missing parts

It doesn’t actually make sense for one bomber or a coordinated group of them all making the same kind of bomb to randomly leave out different components.  It doesn’t make sense, that is, if the situation is to be accepted at face value, as an attempt by some group with the unified motive of intimidating Democrats.  The emphasis in that case would be on the intimidation: appearing real and determined, and instilling fear.  This just looks like a prank.

We’ll have to see what the official briefings say to know more.**

In some cases, the flaws were substantial. In others, more subtle, they said.

The news comes after investigators said the devices appeared poorly made and that it was unclear if they were hoaxes or simply cases of bad construction. Earlier in the investigation, officials in multiple states had described the items as live explosives and a number of senior bomb techs briefed on the probe said they had all the components necessary for successful explosions.

Bomb techs commenting on news shows can undoubtedly disagree on their assessments, especially if they haven’t personally examined the devices.  But earlier on Thursday, LU contributor Joe Newby highlighted the extensive analysis of a former Navy bomb tech, Tom Sauer, who as Joe said “dismissed the ‘device’ [the one delivered to CNN] as ‘silly looking.”’

Sauer basically didn’t really take the “bomb” seriously.  This seems, oddly enough, to fit the seeming sequence of events at CNN, in which someone apparently handled the “bomb” by removing it from its envelope and placing it on a desk, with non-professional photos then being taken of it and posted on Twitter.  Without suggesting that it wasn’t a scary moment or a real concern, that’s not what we would normally expect people who are in deadly fear of a potential live bomb to do.

Joe also quoted a postal carrier who pointed out that the CNN package was suspicious on its face, and a U.S. Postal Service employee wouldn’t have simply delivered it to the addressee.

That makes it especially interesting that investigators have now zeroed in on one USPS processing facility in Opa-Locka, Florida, near Miami.

The Florida facility is a good place to start tracking down the perpetrator(s), of course.  But if the average postal worker would have recognized the packages as suspicious, there may be another reason for a single facility to be implicated; i.e., an accomplice to the exploit within the postal system.

In the same vein, an update from ABC now says that all of the packages were mailed through the postal system.  On Wednesday, it was being reported that at least two had been delivered by courier (the package addressed to John Brennan — erroneously — at CNN, and the package sent to George Soros).  But the ABC update on Thursday indicates a changing story.

Journalist Sharyl Attkisson had another question about the devices being mailed.

I'm just amazed that 6 forever stamps ($3.00) were enough to get these packages to their destinations. My packages always seem to cost a lot more! #TheRealNews #USPSRates https://t.co/IoTfuN9bts

The devices look small, but it seems like a good question.

There are a number of things about this that don’t add up.  But as we noted yesterday, the mainstream media have been busy assigning blame, and don’t seem to be taking time to analyze the actual information.

It’s a crime to send fake bombs as well as real ones.  But evidence is beginning to suggest that this incident is a widespread bomb hoax, rather than an attempt at actually inflicting bodily harm or death on the recipients.  And it seems to have required complicity somewhere inside the U.S. postal system.

Again, none of that is acceptable, and the perp(s) need to be brought to justice.  But it does open the door much wider to a lot of possibilities for motive and intent.