First I’d like to amend a blanket generalization that I made yesterday about the ETA of the migrant caravan on its way through Mexico to the U.S. I posited here that it would take those on foot 100 days to reach the Texas border, and even then on condition that the they managed to cover a highly improbable 20 miles a day every day, without stopping to rest or eat.

I was aware as I penned that column that some of the migrants were traveling at least partway in the backs of pickup trucks but didn’t feel that altered the equation significantly. What I wasn’t aware of is that some have hitched fast rides on the backs of flatbed trucks, which ought to deliver them at the border in plenty of time to make a pro-Democrat political statement before Election Day:

Honduran Caravan Currently Being Driven Towards U.S. Borders On Trucks! May Arrive Sooner Than Expected. Guatemalan & Mexican Gov Does Little To Stop Them. @realDonaldTrump CLOSE The SOUTHERN BORDER#StopTheCaravan #BuildTheWallpic.twitter.com/9m8p80vSgT

Speaking of political statements, we have heard repeatedly from both Democratic leaders and the media that the party’s support for the thousands of illegal aliens who will violate America’s sovereignty and immigration laws is based purely on humanitarianism. It is not, in other words, a cynical ploy to cultivate new Democratic voters as conservatives have posited. On Friday, The Guardian disputed Donald Trump’s claim that upcoming midterms will be “an election of the caravan.” If anyone is exploiting the caravan as a campaign issue, the article went on, it is Republicans, who are milking concerns over the latest mass invasion to gin up the base.

It is refreshing to learn that the Democrats’ hearts are in the right place, even if their mental faculties aren’t quite. They stubbornly refuse to acknowledge the stark reality that illegal immigration costs American taxpayers a total of $89 billion.

As for Democrats’ hearts being in the right place, it might be instructive for one of them to explain what transformed them from heartless bastards like their brethren across the aisle into the party of compassion. Which is to say, they have not always so bullish on allowing aliens to sneak into the country, no matter what conditions in their home country they were fleeing from. As noted here, Hillary Clinton back in 2003 stated on a New York radio show that she was “adamantly against illegal immigration.”

More interesting still are the words of a former Democratic U.S. senator who said:

We simply cannot allow people to pour into the U.S., undetected, undocumented, unchecked and circumventing the line of people who are waiting patiently, diligently, lawfully to become immigrants in this country.

His name? See for yourself.

“We simply cannot allow people to pour into the U.S., undetected, undocumented, unchecked and circumventing the line of people who are waiting patiently, diligently, lawfully to become immigrants in this country” — Barack Obama pic.twitter.com/NsEZDD7PVn 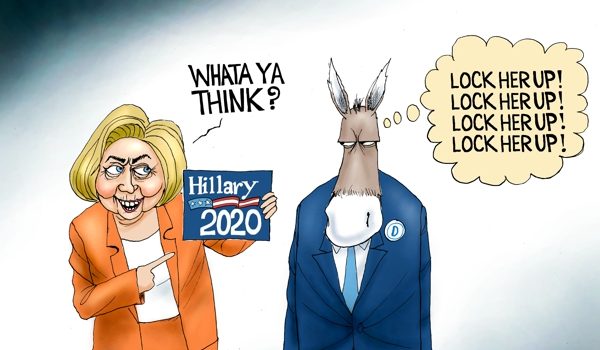 Cartoon of the Day: Hindsight 2020
Next Post
Trump can cut all the foreign aid he likes: Billions will still flow from U.S. to Central America