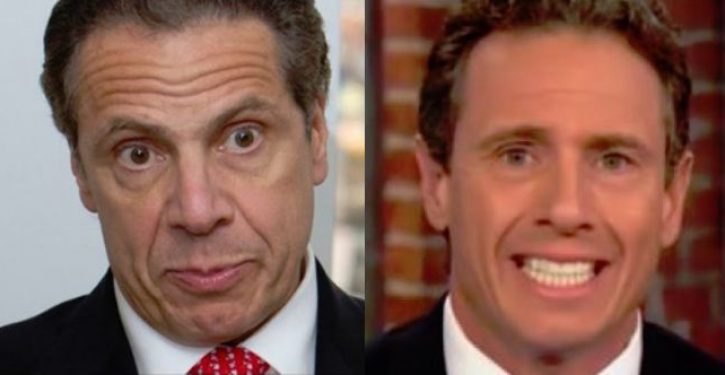 If you have ever played the game “Which Cuomo Brother is Dumber?” you probably have your personal favorite anecdote. Perhaps you enjoyed when older brother Andrew shot himself in the foot by declaring in August that “America was never that great.” Or maybe you preferred when CNN anchor Chris came to the defense of Antifa after they attacked police and journalists by asserting that “all punches are not equal.”

So well known is the Cuomos’ proclivity for saying something stupid that Andrew Cuomo got a laugh at the New York state Democratic Convention when he joked that Chris is not his natural brother but rather turned up on the family’s doorstep, wryly adding, “he was sixteen years old” at the time.

But Chris Cuomo proved himself the dumber brother during an analysis yesterday of Kanye West’s meeting with President Trump in the Oval Office. Like most other liberals, Cuomo began by attacking West, calling him mentally ill and a traitor to his people. But the monolog went from bitterly accusatory to vintage Cuomo when the CNN host began his mind-reading act:

My curiosity wasn’t about what came out of Kanye’s mouth. My wonder went to what is going on in Trump’s head.

Let’s take a look at him. Here is my educated guess, OK? Other than a warm serotonin flush of happy hormone, imaginary headlines: “Blacks love Trump.” “He’s blacker than Obama.”

We’ve heard for years about dog whistles — words with hidden racial overtones that only blacks and liberals are capable of hearing — but imagining that you can read someone’s mind? That’s a whole new level of stupid.

ABC legal analyst Sunny Hostin argues against due process: ‘A woman’s word is enough!’
Next Post
WaPo and others attack Trump over ‘praise’ for Robert E. Lee. Shockingly, none of it’s accurate