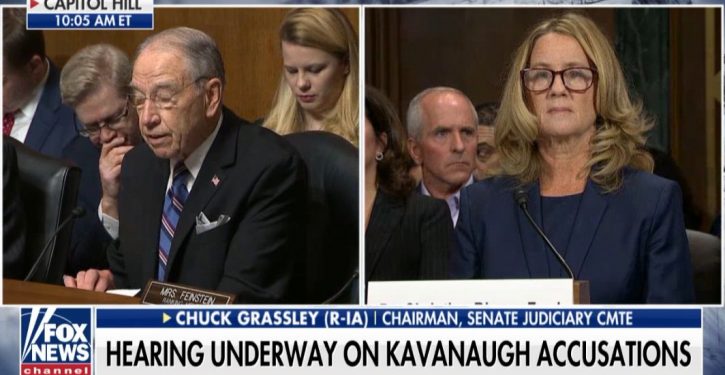 Now that Susan Collins and Joe Manchin have put the vote count for Kavanaugh over 50, it really is time to be focusing on football for the weekend.  But the media have been abuzz with the new level of spine being shown by Republican senators in the last two days, and Chuck Grassley, chairman of the Senate Judiciary Committee, contributed much to that impression early Friday morning.

In a letter to Christine Blasey Ford’s legal team (reportedly dispatched at 4 AM Eastern), Grassley requested they promptly forward a package of materials including not just the long-requested background information on Ford’s allegations (i.e., therapy notes and communications with the Washington Post) but correspondence between the legal team and senators, staff, and witnesses.

In addition to the evidence I requested in my October 2 letter, in light of recently uncovered information, please turn over records and descriptions of direct or indirect communications between Dr. Ford or her representatives and any of the following: (1) U.S. Senators or their staffs, particularly the offices of Senators Feinstein and Hirono, other than your communications with me and my staff in preparation for the September 27 hearings; (2) the alleged witnesses identified by Dr. Ford (Leland Keyser, Mark Judge, and Patrick “P.J.” Smyth); and (3) Debbie Ramirez, Julie Swetnick, or their representatives.

The correspondence is a new request, and the highlighted portion seems to be the key.  If the Wall Street Journal is correct (link below), the information, reported in a number of media outlets on Friday, suggests that the Ford team had basically engaged in witness tampering.

WSJ reported shortly after midnight Eastern time, or a little over three hours before Grassley’s letter was forwarded, that potential witness Leland Keyser said she had come under pressure from Ford’s team to “revisit” her testimony to the FBI, which she gave during the supplemental background investigation requested by the Senate.  Keyser was named as a potentially corroborating witness by Christine Ford, but has consistently maintained she has no memory or knowledge of the party at which Ford says she was assaulted in high school.

At the heart of the allegation about pressure: reported text messages sent to Keyser from Monica McLean, the former FBI lawyer who has been a longtime friend of Ford, and emerged in the last week as someone closely involved in Ford’s testimony against Brett Kavanaugh.

The information about the text messages came from the FBI, and was forwarded late on Thursday to the White House and Senate.

On Thursday, a day after sending to the White House the report on its investigation into the allegations against Judge Kavanaugh, the FBI sent the White House and Senate an additional package of information that included text messages from Ms. McLean to Ms. Keyser, according to a person familiar with the matter.

Monica McLean has her own lawyer, and he denies his client tried to put pressure on Keyser.

Ms. McLean’s lawyer, David Laufman, said in a statement: “Any notion or claim that Ms. McLean pressured Leland Keyser to alter Ms. Keyser’s account of what she recalled concerning the alleged incident between Dr. Ford and Brett Kavanaugh is absolutely false.”

As if to mock any skepticism we’ve been maintaining about the coincidences observed between the Ford allegations saga and the Hillary-emails/Russiagate saga, the name David Laufman will no doubt ring bells for those who have followed the latter closely.  Laufman retired abruptly from the Justice Department in February 2018 — a move thought at the time to be prompted by interest from the DOJ inspector general — and in his position in the DOJ’s National Security Division had played key roles in the Hillary email probe and the Russia investigation.

Documents uncovered in FOIA requests showed that Laufman had participated closely in the Hillary emails probe, including being present for the 2 July 2016 interview of Hillary Clinton conducted by Peter Strzok.  In his position as the chief of Counterintelligence and Export Control for the DOJ, Laufman was also in the approval chain for FISA applications like the one for Carter Page.

Indeed, after James Comey testified in 2017 that the FBI did not coordinate with DOJ for his July 2016 exoneration statement about the Hillary-emails controversy, uncovered documents showed, to the contrary, that Laufman’s DOJ office had been a participant in coordination with the FBI on the matter.

Laufman is now in private practice with his own law firm in Washington, D.C., and is representing Ms. McLean.  The coincidences are beginning to snowball, it seems.  One point of interest is who is paying Laufman’s fees for that representation.  Perhaps it’s McLean.  But the top members of Ford’s legal team — Debra Katz and Michael Bromwich — are both plugged in to the dark-money funding sources of the Left, which include George Soros and other contributors to Democracy Alliance.

For the time being, we’ll watch to see if the Ford legal team turns over the materials listed in Grassley’s letter.  The FBI, apparently, saw text messages that suggested an attempt to put pressure on a witness to change her testimony.  It’s no wonder Grassley would think that’s a big deal.  He may well decide not to drop this once the vote has been held.