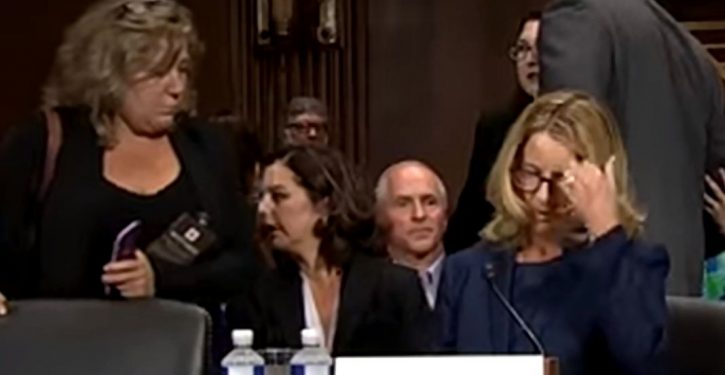 It comes down now to a Senate vote on Friday for cloture on debate in the chamber, and the ability to move forward to a full Senate vote on Brett Kavanaugh’s confirmation to the Supreme Court.

So there’s a sense in which many things will be moot, at least for the time being, if cloture is approved and the confirmation vote is held.  Those things would include not just the particulars of Christine Blasey Ford’s allegations, but how they got to the Senate and how the Senate Democrats – and the left in general – have handled them.

That said, we would do a disservice to the truth, in the process of moving on, to ignore things that are in plain view.  One of those things is evidence uncovered by investigative bloggers that indicate Ms. Ford has had a years-long personal connection to the Justice Department and FBI.  The connection is through the longtime friend identified by her ex-boyfriend from the 1990s, whom the boyfriend says Ford coached to prepare for a polygraph test when Ford and the friend were both living in California.

The friend, Monica L. McLean, who was in Ford’s class at Holton-Arms, has denied that Ford ever coached her on taking polygraph tests.  The ex-boyfriend – whom the Wall Street Journal contacted in mid-September and identified in a 19 September article as Brian Merrick, of Malibu – has made a sworn statement that he did see Ford coach McLean.  That’s where we stand on that matter, which is one we have no way to prove or disprove at this point.  (Mr. Merrick is a realtor dealing in high-end properties in Malibu, and does seem unlikely to make up false stories gratuitously and tell them to public officials in sworn statements.  He’d have a lot to lose from the bad publicity that would come from that.)

When I pulled the string on Ms. McLean myself, I discovered that sundance at Conservative Treehouse had already done  tremendous work.  Rather than include the links and screen caps here, I refer you to sundance’s post.

McLean, an attorney, worked for the DOJ from 1992 to 2016, and seems to have spent most or all of that time working jobs at the FBI.  She was assigned to the FBI’s Los Angeles Division Legal Unit as late as the year 2000, and sometime between then and 2003 transferred to the Southern District of New York. She appears to have remained there, working as a public information officer for the U.S. Attorney and FBI, through at least 2009.

McLean’s history with the DOJ and FBI tends to corroborate the claim by Brian Merrick that she needed to take a polygraph test in the 1990s.  Again, McLean denies that Ms. Ford coached her on that.

It’s worth noting as well that Merrick would have a good idea what he was talking about, as the son of a distinguished California jurist, Judge John Merrick, who has often been called the “First Citizen of Malibu.”  In his statement, the younger Merrick spoke specifically of McLean “interviewing for jobs with the FBI and the U.S. Attorney’s office.”  Perhaps he was coached by a lawyer on that language himself, but he probably doesn’t need to be.  Most ordinary people might not refer to a federal D.A. as the “U.S. Attorney” – but the son of a longtime judge would.

Monica McLean left federal service shortly after the 2016 election, and according to her LinkedIn page is now an independent consultant in Rehoboth Beach, Delaware.

Sundance points out that Rehoboth Beach is where Christine Blasey Ford said she was in July, when she wrote her letter to Senator Feinstein.  Blasey Ford also said she made a trip to the area once a year.

Ford and McLean had been roommates in California 25 years earlier, and classmates at Holton-Arms before that.  A lifetime friendship is apparent.  But sundance also discovered by reviewing video of Ford’s Senate appearance that McLean was present for Ford’s hearing on 27 September.  The comparison with a photo from a community event in Rehoboth Beach (see sundance) shows that it is indeed Monica McLean in the C-SPAN video.

McLean’s acquaintance with Ford’s lawyer, Debra Katz (far left, turned to the side facing McLean), may be a recent one, but her presence indicates McLean has been there for the background process of Ford’s preparation and testimony.  In the crowded hearing room, McLean had to be on a list to get in.  Clearly, she was included as part of the Ford team.

We would expect a good friend to be supportive in such an effort.  But not all good friends are lawyers from the U.S. federal justice system.

That’s why a dot that may connect is particularly interesting.  The reason for following this through is that it sheds light on several things, starting with what the Democrats and Ford’s lawyers have been trying to do.  It suggests a key to their strange insistence on getting an FBI “investigation,” on parameters that they are determined to dictate themselves, while yet withholding from the FBI documents that might bolster Ford’s testimony.

The dot – which may or may not connect, but shouldn’t be hard to look into – is something uncovered by Jim Hoft at Gateway Pundit earlier this week.  He discovered in an online search of Ms. Ford’s 30-plus-year-old arrest record in North Carolina (a record that seems to have been fairly minor, and is not the point here) that the most recent update to the record had been made on 7 July 2018.

For some reason, the screen captures Hoft posted in his article are missing.  They have been scrubbed from archived copies of the article as well.  But they still existed on 4 October at other sites that link to the Gateway Pundit post.  I include here the first of the screen caps, showing that the last update to the record of arrest on a criminal charge was made on 7 July 2018.  The case is shown as “disposed.”

(I am not including the other screen caps here, but as of now they are still viewable at the link above.  They’re public records, and Jim Hoft doesn’t indicate why they are missing from his article, but out of an abundance of caution I am omitting the ones that have Christine Blasey’s name on them.  It’s possible to search on the case number and obtain the results for verification.)

Jim Hoft pointed out originally that the July 2018 update was made about three weeks before Ford sent her letter to Feinstein, which she appears to have done while she was in Rehoboth Beach visiting her friend Monica McLean (see sundance).

But an even more interesting data point is that the records update on the old arrest in Catawba County, North Carolina was made the day after Ford contacted her U.S. representative, Anna Eshoo – that is, the representative for the district where the Ford home in Palo Alto, California is located.

That was the first notification Ford made to a government official that she wanted to come forward.  According to the timeline assembled by prosecutor Rachel Mitchell, Ford made contact with Eshoo on 6 July 2018.  That was also the day Ford initially texted the Washington Post.

The old arrest was from June of 1985.  What are the odds that an update would be made to the North Carolina county’s arrest record one day after Ford contacted Rep. Eshoo, for a reason unrelated to that contact?

The odds seem slim.  Here is where we don’t know if the dots connect, but dots that do connect would offer the best explanation.

The county in question (Catawba) is a red county, and the clerk of court a Republican (a Ms. Kim Sigmon).  Both U.S. senators for the state are Republicans, as are both of the U.S. representatives whose districts include portions of Catawba County.  Favors being done for congressional Democrats in the matter of old local arrest records for non-residents are not that likely, at least not on a one-day turn-around basis.

But there is a federal agency that could independently prompt the county to update its old arrest record in some way, without having to give much of a reason.  That agency is, of course, the FBI.  The FBI makes extensive use of local law enforcement records, and has a chartered interest in those records being updated and accurate.  It probably wouldn’t raise eyebrows for the FBI to make a query that resulted in the update of an old arrest record.

We don’t see on the records what the update to the record was (although I note that the second screen cap — not included here — shows no category code for the crime(s), which may be what the update was about).  My assumption is that the arrest record was never for anything very serious.  Christine Blasey would have been 18 at the time, and whatever it was can no doubt stay in the past.

The real point is that someone was able to get the record updated in July 2018, at a time that clearly shows it was related to the decision to tell her story.  Getting that record updated indicates there was a team on this from the very beginning.

That’s the point.  With Monica McLean in the mix, we know there was someone with a longtime FBI connection on the team.

Sundance and some other bloggers point out how McLean’s assignments placed her over the years in the circle of several figures in the Russiagate saga, and I leave you to speculate as you like about that.  It’s not my project here to tie the two threads together (and such links were bound to happen when McLean transferred to the SDNY, which many highly promotable DOJ and FBI careerists cycle through.  It’s worth noting also that being a public information officer – spokeswoman – in the SDNY would have brought McLean into the orbit of Fusion GPS’s Glenn Simpson, who covered quite a number of the SDNY’s activities on his beat as a Wall Street Journal reporter at the same time McLean was there in the 2000s).

But the FBI connection on Ford’s team – a close, personal one – is important in its own right.  It raises anew the question: what exactly was expected to come of getting the full-blown “FBI investigation,” on the insistent terms of Ford’s Democratic handlers, that they have been seeking so vocally and repetitively.

If the Democrats retake even one house of Congress in the midterm election, we can anticipate finding out more about that.

@Censorship: Twitter bans 10 conservatives accounts; won’t give reason why
Next Post
Kavanaugh *UPDATE* FLAKE and COLLINS both IN – brings votes ‘for’ to 50; MANCHIN piles on, also ‘for’ 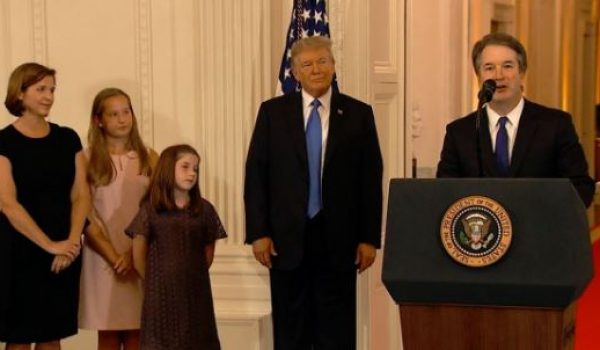