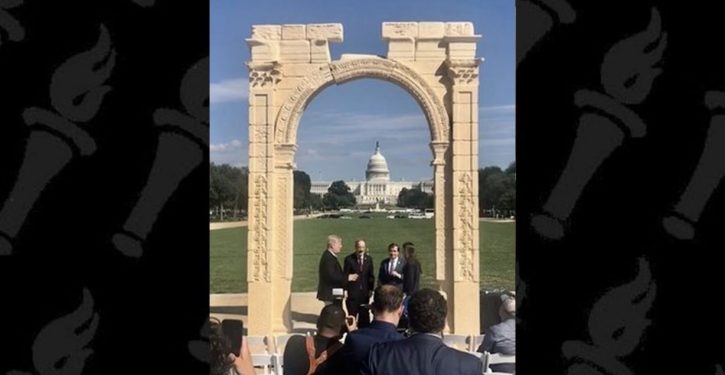 Replica of the Arch of Baal from Palmyra is unveiled at the U.S. Capitol on 26 Sep 2018, with congressional dignitaries in attendance. Institute for Digital Archaeology (link in text for additional images and video of the ceremony)

One thing is for sure. Few would insist that the epic dementia of American politics at this hour does not warrant images of ancient human stains.

As Freedom Outpost and others have reported over the weekend, the replica of an arch from Palmyra, Syria, which in ancient times led to the temple of the pagan god Baal, was erected in front of the U.S. Capitol building on 26 September as part of the replica’s global tour.

The arch was recreated in replica after the original was destroyed by ISIS in 2015 at its historical site in Palmyra.  The arch served as a gateway to the temple of Baal (or Bel) situated at the heart of the urban center.  The worship of Baal, a legacy of the Babylonian Empire, stretched back thousands of years in what was once called Canaan.  But the arch destroyed by ISIS wasn’t built until sometime between A.D. 193 and 211 (or 193-211 CE), during the reign of the Roman Emperor Septimius Severus.

At the time the arch was built, however, pagan worship still predominated in the area.  The temple of Baal was a major feature of the local culture in a city that had grown rapidly, over the previous three to four centuries, along the caravan routes.  Although Roman-era Syrians were some of the earliest Christians, it would not be for more than another century, after Constantine embraced Christianity, that Palmyra became officially Christian.

The temple was converted to a Christian church at that point, and later, after the Islamic conquests, was turned into a mosque.  Through it all, the arch presided over the colonnaded approach to the temple.

This more recent history is what preoccupies the modern preservationists, who have joined forces to recreate the arch as a world heritage artifact.

But Freedom Outpost, along with a number of sites with a Christian or Jewish focus, pointed out that what the arch served as a gateway to was the temple of an ancient “god” to whom, according to the Bible, ritual child sacrifices were made.  The most sober accounts indicate that child sacrifices were not routine – but that they did occur.  See, for example, this account:

Baal’s worshipers appeased him by offering sacrifices, usually animals such as sheep or bulls (1 Kings 18:23). Some scholars believe that the Canaanites also sacrificed pigs and that God prohibited his people from eating pork in part to prevent this horrible cult from being established among them. (See Isa. 65:1-5 for an example of Israel’s participating in the pagan practices of the Canaanites.) At times of crisis, Baal’s followers sacrificed their children, apparently the firstborn of the community, to gain personal prosperity. The Bible called this practice “detestable” (Deut. 12:31, 18:9-10). …

Asherah was worshiped in various ways, including through ritual sex. Although she was believed to be Baal’s mother, she was also his mistress. Pagans practiced “sympathetic magic”, that is, they believed they could influence the gods’ actions by performing the behavior they wished the gods to demonstrate. Believing the sexual union of Baal and Asherah produced fertility, their worshipers engaged in immoral sex to cause the gods to join together, ensuring good harvests. This practice became the basis for religious prostitution (1 Kings 14:23-24).

It isn’t necessary to dwell on more lurid descriptions to recognize why both Judaism and Christianity were appalled by such practices, rejecting them and requiring separation from them.  Falling into the cultish pattern of Baal-type rituals has for centuries been a hallmark of societal collapse for the Judeo-Christian West: evidence of seared consciences, lost moral bearings, and abject depravity.

Michael Snyder, writing at Freedom Outpost, likens the ghastly practices of Baal worship to the most bloodthirsty standards of social acquiescence urged by the advocates of abortion today.  There are certainly parallels to be made.

Readers will have to decide for themselves what the meaning of this interesting timing was.  The arch of Baal replica was placed on 26 September, the day before the hearing in which Christine Blasey Ford and Brett Kavanaugh appeared.  The arch’s brief stint as a gateway to the U.S. Capitol building was scheduled to last until 29 September.

For me, it is an especially poignant counterpoint to ponder how the antiseptic enthusiasm of preservationists whitewashes the horrors of pagan rituals, assisting the ancient hand of the latter to steal across the centuries and assume the role of a symbolic sentry at the people’s house in Washington, D.C.

Sure, ISIS brought us this moment, with its untimely passion for destroying what other people care about and making restoration a cause.  ISIS, that is, and a post-modern Western sensibility separated from moral conscience, mistaking the utility of skeptical empiricism about the past for an excuse to cultivate spiritual blindness.

The symbol, in the end, is just a symbol.  It is men’s hearts we have to attend to.  ISIS, modern Western nihilism, cultural pride and cultural relativism, the occult echoes of ancient Babylon, the lingering imperial stamp of Rome, the haunting patterns of human ruin from before writing and records began: in the Senate chamber on Thursday, through the arch of Baal, America’s leaders were doing everyone’s bidding except that of YHWH Sabaoth.