The police department that has jurisdiction over the area where Christine Blasey Ford claims Judge Brett Kavanaugh sexually assaulted her says it has not opened an investigation into the matter because Ford has not requested one, among other reasons.

The Montgomery County Police Department says it stands by its “victim-centered” approach to launching investigations, despite Maryland Republican Gov. Larry Hogan’s call Thursday for a full investigation of Ford’s allegations and a Wednesday letter from 11 Democratic Maryland state lawmakers with a similar request.

A police department statement in effect as of Thursday explains its position, reported The Washington Post:

At this time, the Montgomery County Police Department has not received a request by any alleged victim nor a victim’s attorney to initiate a police report or a criminal investigation regarding Supreme Court nominee Brett Kavanaugh. The department recognizes that victims of sexual assault may not want to involve law enforcement and/or initiate a criminal investigation, and we respect that position. The department, however, stands prepared to assist anyone who reports being the victim of a sexual assault.

Maryland Coalition Against Sexual Assault Executive Director Lisae C. Jordan pointed out that an investigation into Blasey Ford’s claims would be legally tricky because attempted rape was not a felony without a statute of limitations in Maryland when she claimed the assault happened, according to the Post.

“Maryland laws on sex crimes have evolved significantly since the early 1980s,” Jordan told the Post. “In 1982, there was little awareness of the impact of sexual violence, assaults that did not involve vaginal intercourse were not even considered sex crimes, and many viewed sexual assaults by acquaintances as inconsequential. It’s astounding that any woman ever reported rape.”

Attempted rape was classified as a misdemeanor with a one-year statute of limitations in the state before 1996, according to the Post.

“Launching this kind of investigation without input and cooperation from victims is looking at it from the wrong direction,” Jordan told the Post. “You’re risking re-traumatizing them again. It would be an even worse idea in cases like this, where detectives would know they’d have very serious legal issues to overcome. What would be the benefit?”

Ford alleges Kavanaugh pinned her down and attempted to remove her clothing when they were both minors. (RELATED: Mazie Hirono Is Already Fundraising Off Of The Kavanaugh-Ford Hearing)

Kavanaugh and Ford testified before the Senate Judiciary Committee on Thursday. Kavanaugh has continued to deny any allegations of sexual assault. 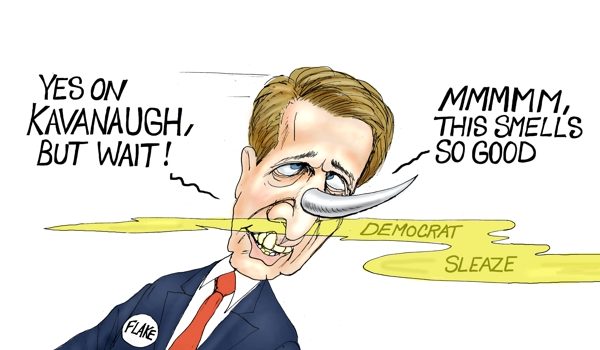 Cartoon of the Day: Jeff Fake
Next Post
Congressional Democrats will use obscure 1924 law to examine Trump’s tax returns – if they regain a majority