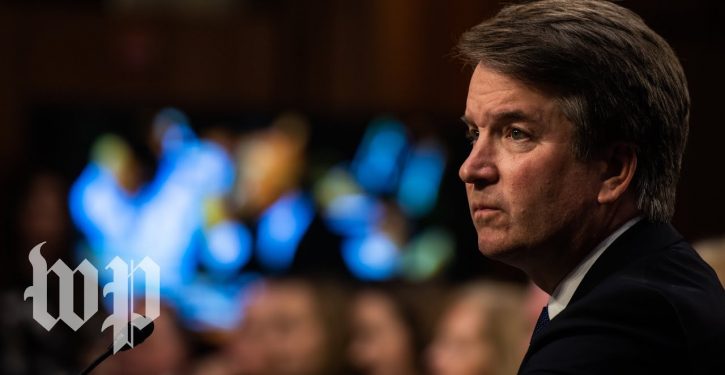 Supreme Court nominee Brett Kavanaugh might keep facing political attacks from the Left if he is confirmed, as is now anticipated, to the nation’s highest court.

Kavanaugh faced an onslaught of attacks from Democrats and liberal activists even before Palo Alto University professor Christine Blasey Ford accused him of drunkenly trying to force himself on her while the two were in high school. Kavanaugh denied Ford’s accusation once again in an emotional testimony Thursday.

Fallon leads Demand Justice, a Democratic dark money group dedicated to opposing Kavanaugh’s confirmation, and previously called for Kavanaugh to be impeached from his current position on the D.C. Circuit Court of Appeals.

“If Senate GOP ignores Dr. Blasey Ford and tries to muscle an attempted rapist onto the Supreme Court: 1. They will pay dearly this November. 2. Senators up in 2020 (Collins, Gardner et al) will feel intense heat for next two years. 3. Kavanaugh will not serve for life,” Fallon predicted.

If Senate GOP ignores Dr. Blasey Ford and tries to muscle an attempted rapist onto the Supreme Court:
1. They will pay dearly this November.
2. Senators up in 2020 (Collins, Gardner et al) will feel intense heat for next two years.
3. Kavanaugh will not serve for life.

Some congressional Democrats are already pledging to investigate Kavanaugh if they retake Congress with him sitting on the Supreme Court. (RELATED: Republican Senators Doxxed By Someone In House Shortly After Questioning Kavanaugh)

“This is such bad practice that even if they were to ram this guy through, as soon as Democrats get gavels we’re going to want to get to the bottom of this,” Whitehouse told CNN on Sept. 20.

“His background is fair for consideration, both before he is confirmed and, if he should be confirmed, we would be duty-bound to follow-up on any blemishes on his record that were not fully discovered prior to his confirmation,” Georgia Democratic Rep. Hank Johnson told The Intercept on Wednesday. “We would owe that to the American people.”

Lieu noted he hasn’t “heard Mark Judge or the other accusers questioned under oath,” but didn’t rule out supporting impeachment.

One of Lieu’s fellow California Democrats, Rep. Eric Swalwell, previously floated the possibility of a “judicial impeachment” in the event that Kavanaugh is confirmed.

“If the Republicans rush through a nominee where you have unanswered sexual assault allegations, I can promise you that Democratic senators will be interested in going and looking at those allegations, and if Judge Kavanaugh lied under oath, you could see a judicial impeachment, and that’s not good for anybody, so we should try and avoid that,” Swalwell told Fox News in a Sept. 22 interview.

Liberal activists and journalists Thursday predicted a push to impeach Kavanaugh if he is confirmed and Democrats retake Congress.

Kavanaugh criticized Senate Democrats’ no-holds-barred campaign to stop his nomination in his statement before the judiciary committee Thursday.

“What you want to do is destroy this guy’s life, hold this seat open, and hope you win in 2020,” Graham said. He went on to call the entire process “the most unethical sham since I’ve been in politics.”