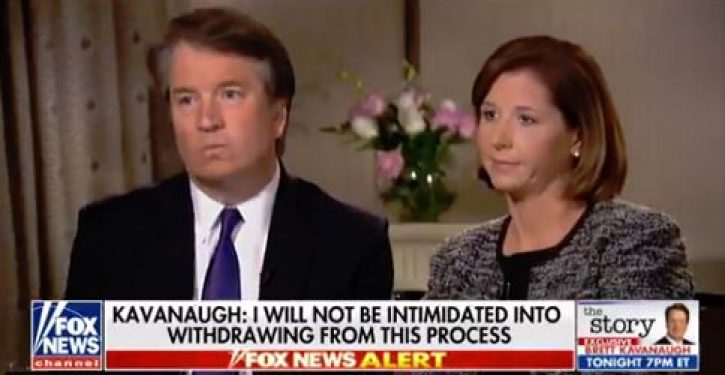 Last evening Judge Brett Kavanaugh and his wife appeared on Fox News Channel’s “The Story,” hosted by Martha MacCallum. The purpose of the appearance was to provide an opportunity for Kavanaugh to build on the comments he had made earlier in the day in a letter to Sens. Chuck Grassley and Dianne Weinstein, chiefly his protestation of innocence and his assertion that he “isn’t going anywhere.”

As George Washington University Law Professor Jonathan Turley said on the same network earlier, the “case” against Brett Kavanaugh is not a legal matter but one being fought in two courts of public opinion — one comprised of the public at large, the other of the U.S. Senate.

The problem is that liberal members of both courts have already made up their minds to believe accuser Christine Blasey Ford, who is scheduled to testify before the Judiciary Committee Thursday. Syndicated liberal commentator Soledad O’Brien, a member of the first court, sniped at Kavanaugh for his decision to appear on Fox News, which in the liberal worldview is a step less serious than the Disney Channel.

So odd to have a Supreme Court Justice hopeful on Fox News. Really, really bizarre. https://t.co/FLRW8PmU3k

Another indication of the first court’s dim view of Kavanaugh is the odds-making site PredictIt, where the likelihood of his being nominated has dropped precipitously.

Members of the other court, the Senate, were also out in force. Here is a brief snippet of one of them, Sen. Chris Coons (D-Del.), expressing the current party line that the burden of proof in this case is on the accused:

The notion that U.S. senators, whose job is to uphold the Constitution, should imply that “presumption of guilt” is the new yardstick in criminal matters is troubling, to say the least.

This view, which Democrats would be horrified by if the tables were turned, prompted White House Director of Strategic Communications Mercedes Schlapp to ask last night rhetorically:

When they say, ‘The verdict is in, Brett Kavanaugh is guilty,’ they ‘believe’ her, then why the heck are we having a hearing if they’re believing her and not even giving Brett Kavanaugh the fair process that he deserves. …

It’s an excellent question, but the answer remains what it has been from the beginning. And that is that Democrats, many of whom have already announced their intentions not to confirm Kavanaugh, will do anything they can to unseat him. That includes conjuring up dog-and-pony shows like the one that has dominated the news cycle for the past week. As frustrating as it is, Republicans have no choice but to see it through. To do otherwise is to cede extra seats in Congress to the Democrats.

Kavanaugh speaks out in forceful letter to Grassley, Feinstein: ‘I’m not going anywhere’
Next Post
Smart money says Kavanaugh won’t be confirmed. Should his nomination be withdrawn?