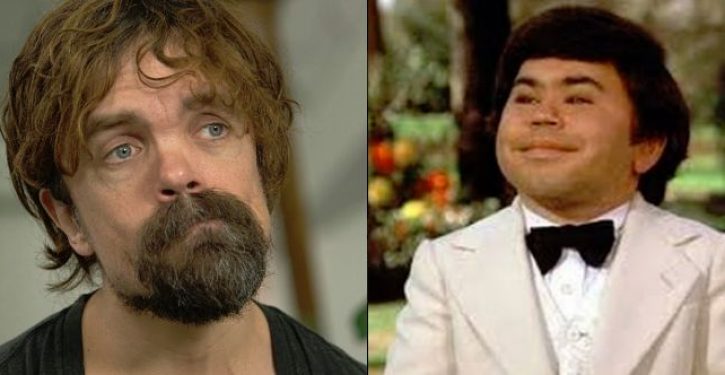 If you’re familiar at all with the rules of political correctness, you might assume the problem is that the actor chosen is not himself a “little person,” the term that some years ago supplanted the political incorrect word midget.

But you would assume wrong. The actor selected to star in a biopic of Hervé Villechaize, who died in 1993 and was best-known for his role as Tattoo in the TV show “Fantasy Island,” is indeed an LP (also acceptable usage). He is Peter Dinklage, who plays Tyrion Lannister in “Game of Thrones.”

But if casting a non-dwarf to play a dwarf was not the problem, then what was? The answer, in a word, is whitewashing. Dinklage, who appears on the left in the above photo pair, is white. Villechaize was not — or at least according to Wikipedia, which listed him as half-Filipino but has since corrected its entry for the actor.

Of course, not everyone who assumed Villechaize was “of color” got their information from Wikipedia. Some people evidently just assumed he was not white because he doesn’t look white.

Dinklage enlarged on this topic eloquently in an interview with Entertainment Weekly:

There’s this term “whitewashing.” I completely understand that. But Hervé wasn’t Filipino. Dwarfism manifests physically in many different ways. I have a very different type of dwarfism than Hervé had. I’ve met his brother and other members of his family. He was French, and of German and English descent. So it’s strange these people are saying he’s Filipino. They kind of don’t have any information. I don’t want to step on anybody’s toes or sense of justice because I feel the exact same way when there’s some weird racial profile. But these people think they’re doing the right thing politically and morally and it’s actually getting flipped because what they’re doing is judging and assuming what he is ethnically based on his looks alone. He has a very unique face and people have to be very careful about this stuff. [Emphasis added]

Shorter (no pun intended) Peter Dinklage: The liberals who are so eager to play the race card are the real racists.

Brett Kavanaugh is already guilty of sexual assault … according to Democratic standards
Next Post
Minimum wage hike in Venezuela shuts stores, wipes out many jobs