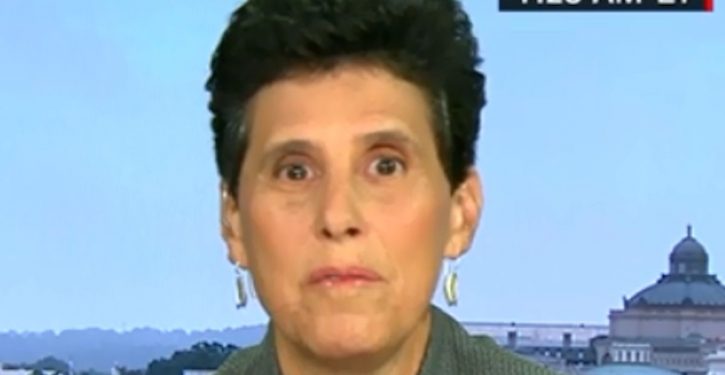 Daniel Greenfield reported on Monday at FrontPage that the lawyer for Christine Blasey Ford, accuser of Supreme Court nominee Brett Kavanaugh, is the vice chair of the board of directors for the Project on Government Oversight (POGO), a Soros-funded “watchdog” group.

Greenfield links to a letter POGO sent to the Senate in August “demanding Kavanaugh records.”  It seems like a hundred years ago, but that was the big scandal the Democrats and media were trying to create at the time (in reality, three weeks ago): a false impression that “Kavanaugh records” were being insufficiently disclosed.

The POGO board’s vice chair has moved on since then.  Greenfield notes her history of donating thousands to Democratic PACs and Hillary Clinton.  Timothy Meads has the same information at Townhall.

Meads also recounts Katz’s interesting opinion on Paula Jones’s complaint against Bill Clinton, expressed by Katz back in 1998.  By Jones’s account, Clinton called her to his hotel room, alone, exposed himself to her, came on to her, and after she rebuffed him, made intimidating comments about losing her job.  Katz’s response:

Katz dismissed Jones’ assertions on March 30th,1998 on CNN’s “Talkback Live” saying that, “Paula Jones’ suit is very, very, very weak. She’s alleged one incident that took place in a hotel room that, by her own testimony, lasted 10 to 12 minutes. She suffered no repercussions in the workplace.”

Likewise, Katz again said on CBS’ Evening News on April 2nd, 1998 that Jones’ allegation could not hold up in court because, “Clearly a one-time incident that took place in 10 to 12 minutes, she was not forced to have sex, she left on her own volition, the courts increasingly are finding that that is not enough to create a sexually hostile work environment claim.”

Daily Mail describes Katz as a “top #MeToo attorney,” but it’s not clear how many Democrats other than former New York Attorney General Eric Schneiderman Katz has found to be worth following through on.  Besides dismissing Paula Jones, Katz spoke dismissively of allegations made about former Minnesota Senator Al Franken:

As Washington wrestled with how to categorize Mr. Franken’s behavior, which was accompanied by a photo that showed him appearing to grope Ms. Tweeden as she slept on a military plane, even some ardent defenders of women’s rights said the senator’s offense was not so grievous as to require his resignation.

“This is not a Harvey Weinstein situation,” said Debra Katz, a civil rights lawyer who handles sexual harassment cases. “Harvey Weinstein was a serial predator who used his power to put women in very vulnerable situations. He abused that power by sexually assaulting women. That’s not what this is.”

Which is basically special pleading: no one else’s case “is” Harvey Weinstein’s.  The allegation wasn’t that what Franken did was “as bad,” but that it rose to the level that was getting other people fired or rejected from public service.

It’s no surprise, in any case, that Katz has the progressive political POGO connection.

Other bloggers have noted Ms. Ford’s participation in an April 2017 “March for Science” event in San Francisco, one of many held on the same day across the country to “protest Trump administration cuts to research.”  It isn’t clear from Ford’s (now-minimal) online profile how politically active she herself is, but Trevor Loudon posted a screen cap suggesting her engagement with the Silicon Valley Indivisible group, part of the highly organized national Indivisible “movement” started by former Democratic congressional staffers a month before Trump took office.

They have a section on their website dedicated to stopping Judge Kavanaugh.

Christine Blasey was active in their Silicon Valley Chapter. pic.twitter.com/Q5t2r0VDKv

The Indivisible connection also makes sense, given its centrality in a host of “resistance” and anti-Trump activities.  I reported several times on Indivisible’s disruptions at congress members’ town halls in 2017, and in one of those reports, noted the comprehensive schedule of progressive-cause events being promoted by a Northern California chapter.  One of the events was the 22 April 2017 March for Science.  The one this particular Indivisible group touted was in Sacramento.  But it was the same nationwide schedule on which Ford took part in the one in San Francisco.

Indivisible crops up in other ways too.  One is particularly intriguing, as it argues for a connection with Debra Katz.  Katz’s political donations are all recorded from a location (apparently her residence location) in Takoma Park, Maryland.  Takoma Park is in Montgomery County, where a well-developed and organized Indivisible chapter is in operation.

Indivisible websites often list POGO — among a largely identical list of other Soros-funded groups — as a resource for information to support activism and “resistance” activities (run searches if you want to verify that; examples abound).  The Montgomery County Indivisible blog made a special point of highlighting POGO as a resource in a May 2017 post, however.

And the post’s topic was “survival” for civil servants, at a time when Trump’s administration, according to the post, had “declared war” on them.

Debra Katz advertises herself as an attorney specializing in “sexual harassment, employment, and whistleblower law,” the latter two categories relating directly to the alarms expressed in the Indivisible MoCo post.  It’s unlikely to be mere coincidence that an Indivisible “resistance” chapter in suburban Maryland is concerned about the future of civil servants in the Trump administration, and plumps for POGO as a key resource in that regard — and that a California professor with at least some engagement with Indivisible linked up with POGO-affiliated sexual harassment/whistleblower attorney Debra Katz.

Howard Portnoy advised us on Monday that Brett Kavanaugh’s mother was the judge in a foreclosure hearing on Christine Blasey Ford’s parents’ home in Maryland in 1996.  That could certainly be a factor in what’s going on right now.

As Daniel Greenfield observes, meanwhile, the political signals are there to indicate this is an organized hit job on Kavanaugh.