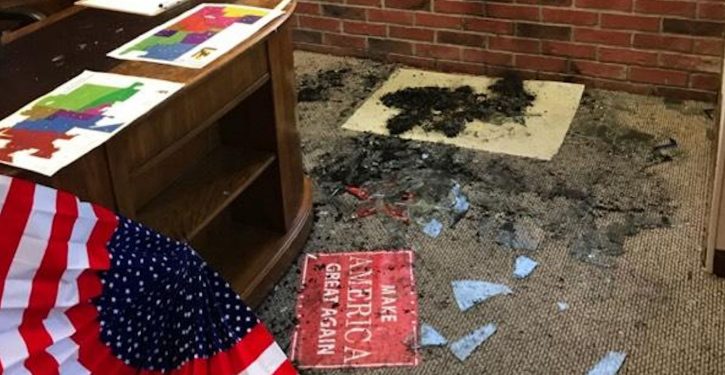 The local police department is cooperating with the federal Bureau of Alcohol Tobacco and Firearms (BATF) in the ongoing investigation, Morgan said, adding that authorities have not yet identified a suspect or a motive for the fire.

The burnt office is shared by the Albany County Republican Party and the Wyoming College Republicans, who began moving in on Tuesday, less than 48 hours before the fire, Albany GOP spokesman Ben McKay said.

Photos obtained by TheDCNF from McKay show a fire-scorched carpet, a darkened, partially burnt chair and campaign signs strewn about the floor.

Here’s what the office looked like before Thursday morning’s fire:

The fire damaged the building’s interior but was otherwise limited thanks to a passerby who called authorities, McKay said.

The damage from the fire could have been far worse, McKay said, noting that someone lives in an apartment directly above the Republican office.

“I’m grateful to members of the Laramie Police and Fire Departments who responded to the fire and worked to ensure the safety of the community. As an investigation proceeds into the circumstances surrounding the fire, we should all pause to remember that the future of our nation depends upon our ability to exchange ideas and viewpoints, to argue and debate, free from violence and intimidation,” Cheney said in a statement released to TheDCNF.

“Citizens across our state, and across the spectrum of political viewpoints, work hard everyday to fight for our communities, our values and the causes we hold dear. There is never any excuse for resorting to violent attacks to thwart these efforts or silence speech.”

The Wyoming GOP office is just the latest Republican office to be vandalized.

Vandals in Nebraska threw a brick through the window of a local GOP office in July. They left behind a spray-painted message: “ABOLISH ICE.”

A North Carolina GOP office was firebombed a month before the 2016 election, and a building adjacent to it was spray-painted with graffiti: “Nazi Republicans get out of town or else.”

Cory Booker’s threat to throw himself on his sword by exposing classified emails turns out to be false bravado
Next Post
What his angriest opponents accuse Trump of, they immediately manifest themselves