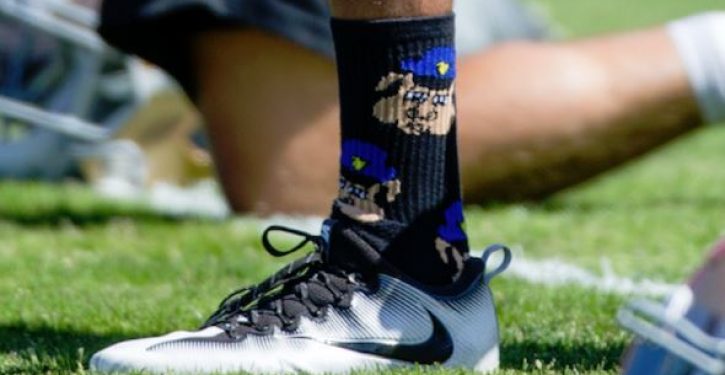 Colin Kaepernick's socks showing a pig in a police uniform

On Tuesday, the National Fraternal Order of Police (NFOP), the nation’s largest police union, released a statement in reaction to Nike’s choice of lightning rod Colin Kaepernick as “the face of its new Just Do It” campaign.

The statement could have taken many different directions. It could have examined the origins of Kaepernick’s now-famous and widely imitated show of disrespect for the national anthem. The first time he refused to stand, on Aug. 25, 2016, he claimed his purpose was to protest “wrongdoings against African Americans and minorities in the United States.” That may well have been true, but it is also true that his NFL career, which had started promisingly, was on the skids, and his antics may have been nothing more than a cry for attention.

When no other team would hire him after he opted out of his contract with the San Francisco 49ers, apologists claimed he was being punished for his protest. Democratic pollster Fernand Amandi proclaimed on MSNBC’s “AM Joy” that “America owes Colin Kaepernick an apology this morning, and the NFL owes him a job.”

Don’t overthink why Colin Kaepernick is still a free agent. Simply put, years have passed since he was an effective quarterback. He is 29 years old, has succeeded only in an unsustainable scheme and is part of a well-populated group of former starters who also remained available as the week began.

To blame Kaepernick’s unemployment on his protest is to misread the way NFL teams make personnel decisions.

But the NFOP chose not to focus on this angle in its statement on Nike’s ad campaign. Nor did the organization emphasize Kaepernick’s transition from “wrongdoings against African Americans and minorities” in general to police brutality in particular. The group could have picked up on the hateful novelty socks Kaepernick allowed himself to be photographed wearing during team practice. The socks depicted a cartoon pig wearing a policeman’s hat. It was certainly a defiant gesture for a man who claimed that black Americans live in fear of the police.

Finally, the NFOP could have held the Nike tagline — “Believe in something, even if it means sacrificing everything” — up to ridicule. They could have noted the irony of applying that sentiment to a man who appears to believe in nothing and has sacrificed as much.

Instead, the NFOP wrote this: 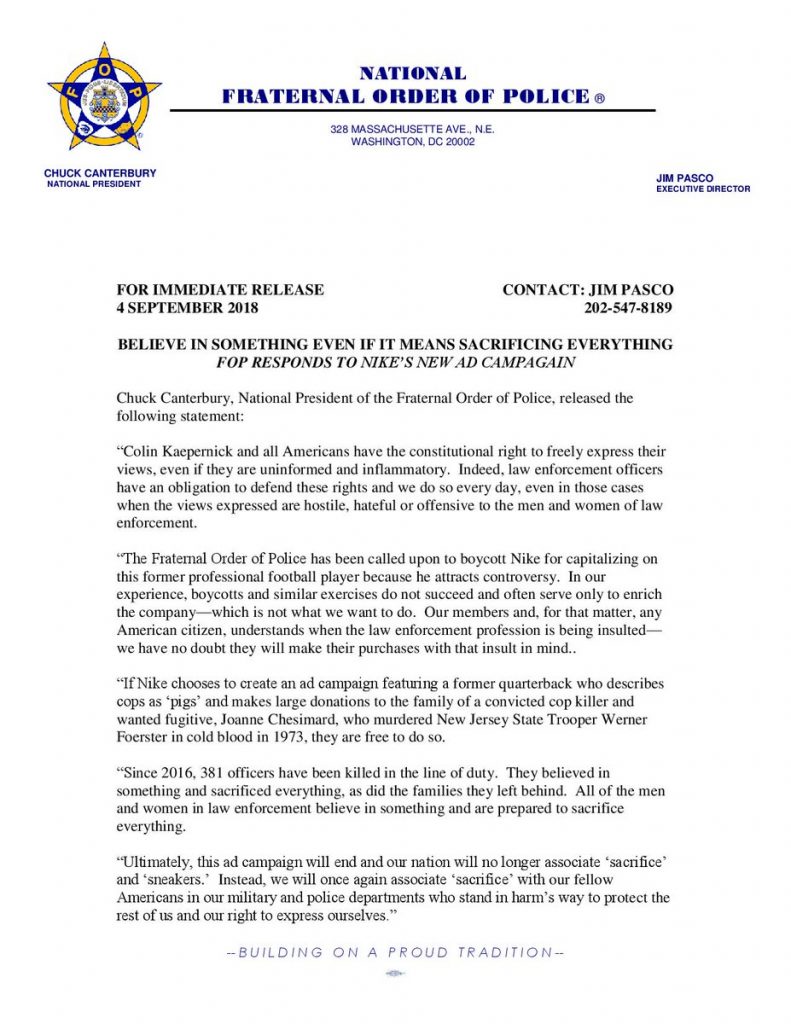 Anonymous op-ed at NYT celebrates the ‘deep state’
Next Post
Twitter’s CEO says Trump not immune from being kicked off, but that’s not what he said previously