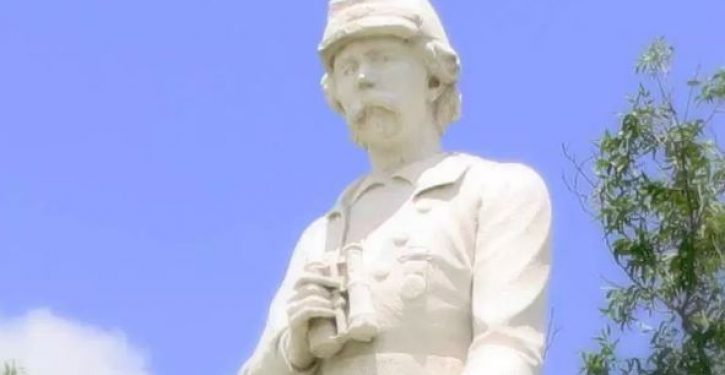 It’s been a quiet few months since the last reported case of “statue fever.” That refers to the politically correct obsession with statues and other public art that offends liberal sensibilities, usually because of perceived racist intent, and which, therefore, need to be removed from the public square.

As an indication of how ridiculous state fever can get, in April a statue of American song-writer Stephen Foster was banished from a Pittsburgh park because “experts” decided that a banjo-strumming figure at the base of the sculpture must represent a slave. The sculptor could not be questioned about his intentions because he was long dead, but the statue was removed “just to be on the safe side.”

The latest episode of statue fever offers a cautionary lesson to those who would deface or otherwise sabotage a work of public art in an attempt to rewrite history. According to Houston station KHOU, 26-year-old Andrew Schneck was sentenced to six years in prison for attempting to blow up a statue of Confederate General Richard W. Dowling in Herman Park last year.

On August 19, 2017, a park ranger noticed Schneck kneeling in bushes in front of the General Dowling monument with a box full of explosives.

Schneck was holding two small boxes with various items inside to include what appeared to be duct tape and wires.

After placing the boxes on the ground per the ranger’s request, Schneck took a drink of clear liquid from a plastic bottle, spit it out and poured the remainder on the ground.

The ranger then noticed a timer and wires in the box and notified the Houston Police Department.

Schneck, who is the son of a prominent member of the Houston arts community, gave as his reason for trying to destroy the statue that he “did not like that guy.”