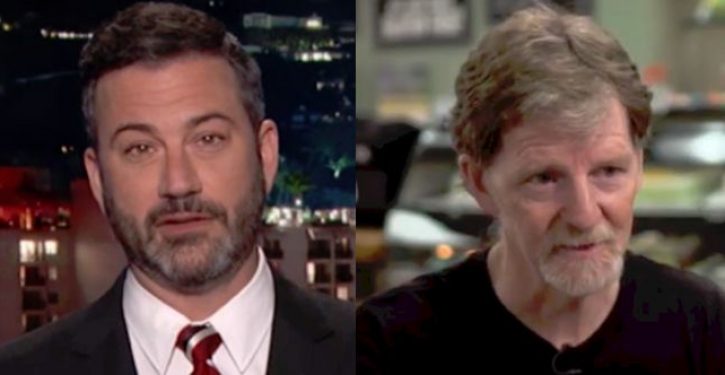 Jimmy Kimmel still hasn’t learned that the Left has no stomach for his “jokes” when they venture into the gay lifestyle, a reference to which the former “Man Show” host used to insult conservative host Sean Hannity back in April.

The two were embroiled in a Twitter war when Kimmel tweeted:

Don’t worry – just keep tweeting – you’ll get back on top! (or does Trump prefer you on bottom?) Either way, keep your chin up big fella..XO

He was instantaneously rebuffed by gay comedian Phillip Henry, who tweeted:

I swear to Beyonce if you straight people don’t STOP making things gay because you can’t find a way to be clever or original in any other way, we will impose sanctions and cease aide! https://t.co/8L9DX3hEE6

But this past Thursday, Kimmel was back to his old tricks. This time his target was Colorado Christian baker Jack Phillips, who after winning a Supreme Court battle over his refusal to bake a gay wedding cake, was back in the headlines, this time for refusing to bake a cake celebrating a transgender person’s “transition.”

Kimmel quipped during his monolog:

The Colorado civil rights division says [Phillips] has to bake it for them. And he doesn’t want to. Which is really funny. Because this is a guy who spends all day, every day, meticulously designing flowers out of icing. His whole life is gay.

I don’t know if he’s worried the wrong cake might bring that to life or what. And I will add, this is Jack Phillips, the totally straight cake baker. You would think that someone who looks like the Reba McEntire version of Colonel Sanders would be more sympathetic to gender identity issues.