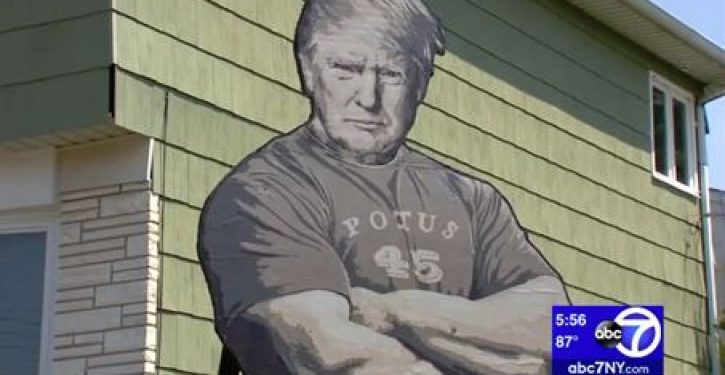 Or worse? Forgive my cynicism, but we’ve been here before.

Artist Scott LoBaido’s latest oeuvre is a larger-than-life tribute to the president, which he created to adorn the lawn of a Staten Island homeowner. LoBaido and his clients have already experienced the work of vandals, who set fire to a 12-foot-high red, white, and blue “T” created in 2016.

At the time of the blaze in August 2016, homeowner Sam Pirozzolo, who had commissioned the work to show his support of then-candidate Donald Trump, told reporters with New York’s WABC:

And cowards they were, sneaking onto Pirozzolo’s property after dark to commit their brazen crime.

No such acts were visited on the Left-inspired anatomically correct nude statue of Trump unveiled in Central Park around the same time. Or the insulting nude painting of the Republican candidate that depicted him with a tiny penis after it went on display at a London gallery in April 2016. Or most recently. Or the many idiotic baby Trump hot air balloons floated over Parliament during the president’s visit last month.

These and other incidents throw light on Trump haters’ very conspicuous double standard when it comes to protest and their First Amendment right to peaceable[!] assembly.

This time, the homeowner living in this pro-Trump enclave of New York City, has taken precautions in the hope of warding off anti-Trumpers. According to LoBaido, “He put up security cameras all around the house. We have a fence here. And everybody in the neighborhood is on watch.”