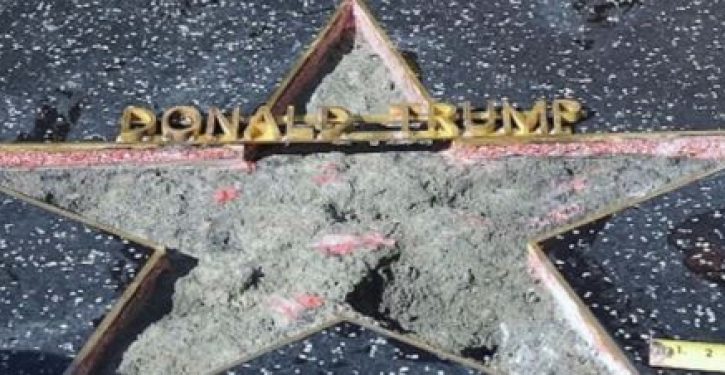 In a purely symbolic move — it still needs to go before the Hollywood Chamber of Commerce, which controls the tourist attraction — the West Hollywood City Council has unanimously passed a resolution to remove Donald Trump’s star from the Hollywood Walk of Fame.

The star, which was recently bludgeoned by a vandals using a sledgehammer and pickax, was placed on the Walk on Hollywood Boulevard on on Jan. 16, 2007 to honor Trump as producer of the NBC reality show “The Apprentice,” in which he also had a central on-screen role.

According to The Daily Caller, the proposal to remove the star cites as its reasons:

The whole affair would be a joke if it weren’t coming at a time when the First Amendment is under siege by the Left. Yesterday, liberal social media giants Facebook, Apple, YouTube, and Spotify joined forces to “unperson” Infowars’s Alex Jones. As if that weren’t bad enough, the action received the blessing of a Democtratic senator who urged these companies to “do more than take down one website,” adding,  “The survival of our democracy depends on it.”

The problem with political purges is that once they start, they became difficult to stop.

Dem senator tweets out, ‘Survival of our democracy depends’ on censorship by big tech
Next Post
Dem Sen. Mazie Hirono invades judges’ privacy by prying into their sex lives