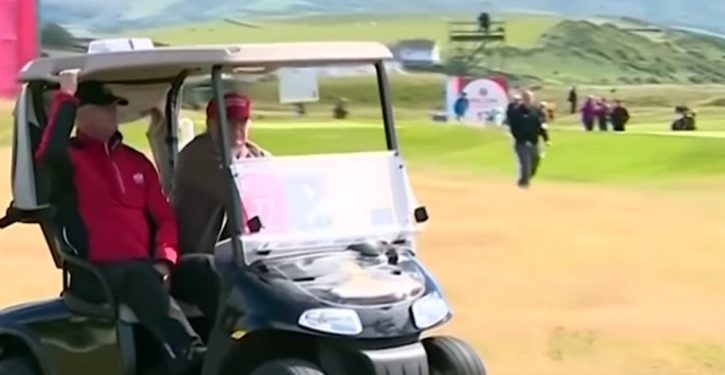 It may not bother you that the Washington Post has been unable to identify a number of the people President Trump plays golf with.

But it bothers the Washington Post.  The paper is therefore reaching out to the public on this question.  (H/t: The Hill.)  WaPo is crowdsourcing its investigative journalism.

The problem began when a GOP bundler and private defense company owner sought to arrange a round of golf between Trump and the prime minister of Malaysia.  Says the Post:

Broidy’s private defense company was seeking a contract with the government of Malaysia and its prime minister, Najib Razak. Apparently, to build a better relationship with Najib, Broidy attempted to set up a round of golf between Najib and Trump, appealing directly to the president in June of last year. Trump, Broidy said in an email to White House Chief of Staff John F. Kelly earlier this year, was happy to do it.

In spite of Trump’s failure to run his golf schedule through the Post news desk, the paper was apparently able to confirm that no golf engagement actually ensued.  But there was still this fell consequence:

What’s remarkable, though, is that if Najib had joined Trump at Bedminster that weekend, we might not have known whether the two played golf.

Granted, this seems a rather silly point.  Malaysians would be as interested as Americans in whether our political leaders had a round of golf together.  There is no real likelihood that it would have been kept a secret.  We have no reason to believe Trump has been secretly playing golf with foreign leaders.

But then, tracking Trump’s activities with prime ministers isn’t really what WaPo is concerned about.  Najib Razak is just a plausible-sounding excuse for complaining that the media aren’t being given a full view of Trump’s golf outings with other, less public individuals.

Trump chooses to play on courses where he can keep outside observers from seeing what’s going on. That also means that it’s often hard to learn about his partners and, further, to confirm that he was joined on the course.

What it means is that Trump holds three-hour-long meetings with unknown individuals multiple times a month.

The fact that any president could be doing that at any time seems to hardly need saying, but we’ll say it anyway.  For much of any given president’s any-given-day, we know only what the White House staff discloses about the president’s doings.

The Post‘s suspicions have prompted their staff to do some analysis, and publish a nifty calendar graphic entitled “When Trump has likely played golf.”

The story also offers a handy tool to help reader-sleuths focus their efforts to identify golf dates and partners.  WaPo doesn’t even know for sure that Trump was playing golf during some of the times he was absent from their concerned gaze for long enough to do so.  But on the theory that he might have been, the article has a starter list of suggestive dates and locations, with click-button links for submitting tips.

It’s a real disadvantage for the mission of afflicting the comfortable, when a president has a string of his own golf courses to whack a few around on.  The worst part, one can’t help suspecting, is not that Trump might be having “meetings” with unknown persons, but that if anti-Trump activists don’t know his golf partners’ identities, they won’t know whom to afflict.

FBI has long relied on the far-left Southern Poverty Law Center for tips on ‘domestic terror threats’
Next Post
A modest proposal: Why don’t self-described socialists work for free?