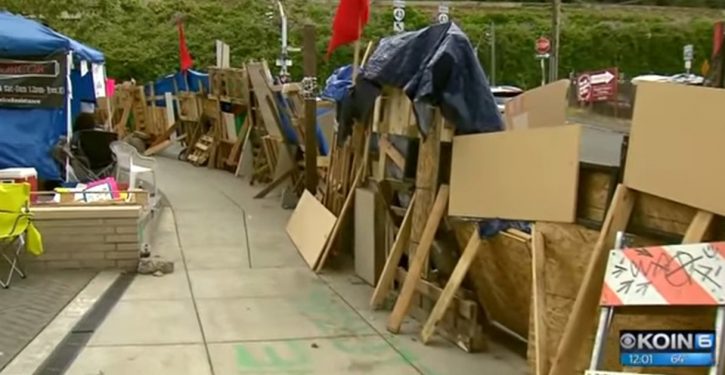 If this were something other than a radical-left operation, it would be ironic.  Instead, it’s par for the course.

In June, the Occupy-type protesters who assembled to rally against U.S. Immigration and Customs Enforcement (ICE) in Portland, Oregon created a makeshift tent city so they could live right next to their protest site.

But rather than observing the “open borders” principle they demand for the United States, the anti-ICE protesters put a wall at the access points where their encampment was exposed (i.e., not bordered by an existing fence or building), constructed of crate materials, wooden and metal poles, tarps and plastic sheets, etc.  (There’s another good picture at the Oregonian link below.)

They also posted warning signs at the “entry” points.  Andy Ngo, who has been owning this story from the beginning, records in a must-read tweet thread that attempts to enter the camp have been met by activists apparently functioning as watchmen.

I just got back from the “abolish ICE” Portland camp. It’s become a sprawling parallel fortress society. The smell is memorable. Many rules (eg photography not allowed inside). pic.twitter.com/u1doewRaaZ

You’d almost think the anti-borders contingent was guarding a border around its camp.

When Portland police warned the protesters this week that their camp would be dismantled and they would have to evacuate, the protesters set up a perimeter watch along their wall.

Sometime soon, the City of Portland will likely start clearing the anti-ICE/anti-borders camp (notices already posted more than 24 hours ago). In response, the camp has walled themselves off completely. They even have "wall guards" keeping watch. From the last hour: pic.twitter.com/sDSm45Xnkh

According to Gordon R. Friedman at the Oregonian, officers of the Federal Protective Services, detailed for the security of the ICE facility, have been subjected to racist and sexist slurs hollered at them by the anti-ICE protesters.

In emails obtained by the newsroom, one African American officer reported to an administrator that protesters “began yelling racial slurs” at him, including the N-word. The officer said he was also called a “blood traitor” and an Uncle Tom, a derogatory term implying a black person is acting subservient to whites for money or prestige.

“These racial slurs have been directed at me throughout the entire length of the deployment,” the officer wrote. …

Another officer, who is a woman of Hispanic and Native American descent, said she was called derogatory terms for Hispanic people and told she is “a weak female” and a “traitor.”

“I was berated for so long I can’t even remember everything that was told to me,” the officer wrote.

Local news was there for the camp takedown on Tuesday, with a few snaps of the inevitable mess left behind.

Here's a look at what the camp looks like now. There's only about eight people here now. They tell me they plan to clean up. #OccupyICEPDX #LiveOnK2 pic.twitter.com/EEQ11LJsKx

The Occupy ICE protest camp continues a tradition of radical-left protests violating the very principles they purport to advocate.  In early 2017, the huge anti-pipeline protest camp at Standing Rock, in North Dakota, had to be shut down by authorities.  The protesters had repeatedly insisted they were there because the Keystone XL pipeline would pose a threat to the local waterways.  They advertised themselves as “water protectors.”

But their own camp was the biggest threat to the waters around Standing Rock.  In the winter months, the massive trash heaps it generated, covering several acres, were frozen.  But with the spring thaw coming, local officials were gravely concerned about what would end up in the nearbv waters.  The camp had to be broken up, and the trash cleaned up at a cost of hundreds of thousands of dollars.

The Portland camp wasn’t there nearly as long, but seems to have gotten a good head start on trash.  Reporter Lashay Wesley at ABC-affiliate KATU in Portland said the protesters planned to clean it up.  However, a fellow reporter tweeted on Wednesday that services contracted by the city, and paid for by the property owners, were doing the actual clean-up.

According to Andy Ngo, the smell at the Portland camp was “memorable.”