Elon Musk is at it again: His rocket company, SpaceX, anticipates receiving more government assistance to complete its Big Falcon Rocket (BFR), the Mars rocket that Musk will have will updates on “in a month or so.”

Over the course of his career, Elon Musk has received more than $5 billion dollars in government assistance. The BFR has even reaped over $70 million from the Air Force. Why should taxpayers continue funding a rocket that many in the aerospace community believe is unsafe for human spaceflight?

In June, retired Astronaut Chris Hadfield stated that he does not even believe the BFR, among other rockets, will ever take people to Mars because it’s not practical, it’s dangerous, and it takes too long. Hadfield added that “the majority of the astronauts that we send on those missions wouldn’t make it.”

As the Washington Post has shown, Hadfield is not alone in his belief that the BFR is unsafe. While Musk is still promoting the idea that his rocket will send humans to Mars by 2024, a NASA advisory group warned in a letter to Thomas Stafford, a former astronaut who currently chairs the agency’s International Space Station Advisory Committee, that SpaceX’s fuel loading strategy dubbed load-and-go is “contrary to booster safety criteria that have been in place for over 50 years.” A January 2018 report from the Aerospace Safety Advisory Panel also advised NASA to continue investigating this issue to find other potential hazards.

Sidestepping decades of NASA precedent, Musk – attempting to increase the power of his rockets – shrinks his rocket propellant by freezing it. This fueling loading strategy allows SpaceX to pack more fuel into the same space, which allows for larger payloads. However, to keep the fuel cold enough, it must be loaded just before takeoff. This means that the cargo and – most importantly – humans, must be on board during the fuel loading process. This is incredibly dangerous because of how explosive rocket fuel is. (RELATED: Pre-launch explosion destroys SpaceX rocket at Canaveral.)

The slightest exposure to flame or an electrical spark can have dire consequences. In fact, according to Forbes, it may have already caused adverse outcomes, as this was the same fueling loading strategy used for the Falcon 9 rocket that exploded on the launchpad, destroying a $200 million Facebook satellite.

In addition to the flawed fuel loading strategy employed by SpaceX, the Department of Defense found many problems with procedures and policies at SpaceX. “Bottles of soda and personal items” were found in highly controlled areas and engines were left “inadequately protected,” to name just some concerns.

In all, SpaceX was found to have 33 of the 68 major nonconformities among the contractors it reviewed. Taxpayers should expect better results and behavior from this company, which receives 85% of its business from the federal government and expects to ferry astronauts to Mars.

Even Musk himself appears unsure of how safe his BFR’s trips to the Red Planet will be. Earlier this year, he categorized it as “difficult, dangerous, good chance you’ll die,” with “excitement for those who survive.” There will always be inherent risks in traveling to uncharted territory, but Musk does not seem to even be thinking twice about his high-risk plan to get there.

If Musk wants government money, he must produce national security assets, not security gambles. SpaceX has already received billions in government funding, including tens of millions for the BFR. Granting more money for this rocket now when SpaceX has done little to resolve the dangerous operational procedures defense experts have cautioned about would be short-sighted. 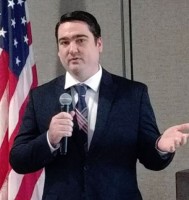