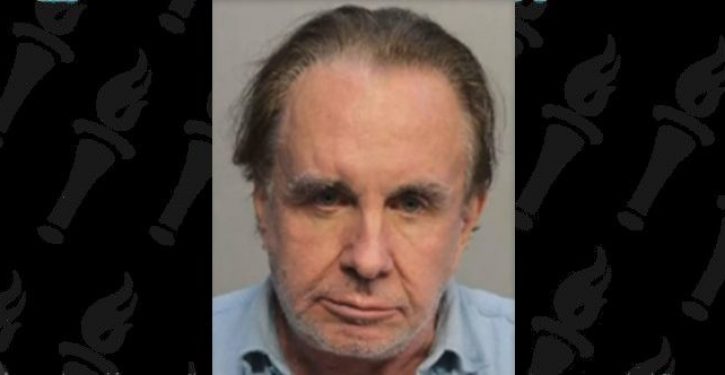 According to residents at a condominium in Miami Beach, 72-year-old Walter Stolper had been a less-than-ideal neighbor. “This is a crazy madman,” resident Rafael Solar, told ABC Miami. “He has dirtied up the carpet before.” Others maintain that he had shown aggression toward some of the residents and board of directors of the building.

But yesterday, police intercepted Stolper as he was minutes away from setting the building on fire with an eye toward — in his own words — killing “all the f*cking Jews.”

I’m a family guy and I have kids and I wouldn’t want anything to happen to them. So I contacted the building and they contacted police. I think he needs help. He is a confused older man. I have been his friend for 10 years and I know him because I am a camera technician and have done work for him. At first, I thought he was just angry and venting but I realized it was much more.

It was much more indeed. On Friday afternoon, police found 28 containers filled with gasoline, sulfur powder, and potassium nitrate in a storage room linked to Stolper.

“We do believe that we were minutes away from a potentially deadly situation,” Miami Beach Police spokesman Ernesto Rodriguez is quoted as saying:

This is an individual that our intelligence unit intercepted with two filled gasoline tanks as he was coming back into the apartment building. Already in the building, he had disposed of eight additional gasoline canisters down the trash chute from the 15th floor.

Inside Stolper’s apartment police found Nazi reading material, a swastika, and two firearms, which police also confiscated. Police say he also destroyed the smoke detector in his apartment, which was hardwired into the building’s fire alert system.

Stolper has been charged with attempted murder and attempted arson.

New Russian ‘hacking’ indictment: Comey basically prophesied in 2017 that we’d key on this
Next Post
Tweet of the Day: From the mouths of babes