Perhaps he’s just so used to defending illegal activity that he doesn’t even know when he breaks the laws himself.

Either way, New York City Mayor Bill de Blasio and his security detail are being accused by U.S. Customs and Border Protection of violating both American and Mexican immigration laws by crossing the southern border on foot during a recent photo op in Texas.

De Blasio had joined roughly 20 other mayors who went to the border in El Paso just one day after President Trump signed an order stopping family separations at the border.

“We fully expect to be turned away,” the mayor said at the time, knowing he was engaged in nothing more than a publicity stunt.

“Hi, how you doing? Mayor Bill de Blasio, mayor of New York City, is there a supervisor to talk to here?” he said to a guard at the facility, who subsequently ignored him.

What happened next, according to Border Protection, put De Blasio in the same class as every other illegal crossing the border. And he did it twice, allegedly.

According to a letter obtained by the Associated Press, Border Protection is accusing De Blasio and his entourage of crossing into Mexico, then crossing back into the U.S. after being rebuffed by the guard at the holding facility for immigrant children.

De Blasio’s crew were taking pictures of the facility when they were asked if they had been authorized to do so. A New York Police Department inspector said they had not been authorized, prompting agents to ask how they got to their current location. They pointed to Mexico.

When they were informed that they had crossed the border illegally, the group responded by … doing it again!

“The agent told them they’d crossed the border illegally and asked them to remain there while he got a supervisor and took them to an official crossing for an inspection per federal law, according to the letter,” the report reads.

“But the group disregarded the order and drove back to Mexico, according to the letter.”

A spokesman for de Blasio’s office denies the allegations:

The mayor crossed the border with the direct approval and under the supervision of the border patrol supervisor at this port of entry. Any suggestion otherwise is a flat-out lie and an obvious attempt by someone to attack the Mayor because of his advocacy for families being ripped apart at the border by the Trump Administration.

Who do you think is telling the truth? 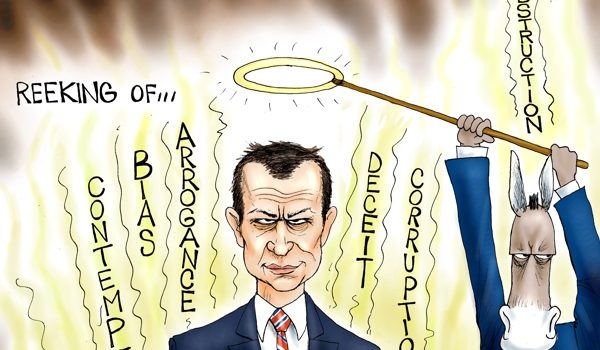 Cartoon of the Day: Strzok out
Next Post
Dem Rep. Steve Cohen says Strzok should get Purple Heart for facing grilling by GOP members