Disgraced FBI agent Peter Strzok says that a congressional hearing held Thursday to discuss his anti-Trump text messages and his work on the Russia investigation is “another victory notch in Putin’s belt.”

“I have the utmost respect for Congress’s oversight role, but I truly believe that today’s hearing is just another victory notch in Putin’s belt and another milestone in our enemies’ campaign to tear America apart,” Strzok said in prepared remarks released ahead of his testimony before the House Judiciary and House Oversight Committees.

Strzok’s public appearance followed an 11-hour interview he gave to members of the two committees on June 27. Republicans grilled Strzok over certain aspects of the Russia investigation, which Strzok led as deputy chief of counterintelligence at the time.

Republicans were particularly interested in Strzok’s familiarity with the infamous Steele dossier as well as his handling of Foreign Intelligence Surveillance Act warrants granted to spy on former Trump campaign adviser Carter Page.

Strzok’s text messages with his mistress, an FBI lawyer named Lisa Page, were also a topic of interest in the closed session.

Strzok claimed in his opening remarks that text messages that he sent criticizing President Trump “were expressed out of deep patriotism and an unyielding belief in our great American democracy.”  (RELATED: Strzok: ‘We’ll Stop’ Trump Presidency)

In the texts, Strzok called Trump an “idiot.” In one Aug. 26, 2016 text, he criticized Trump supporters, writing that he “Just went to a southern Virginia Walmart. I could SMELL the Trump support…”

Strzok also discussed the Trump-Russia investigation, and suggested in one exchanged that he planned to use the investigation to hurt Trump’s campaign.

The Justice Department’s Office of the Inspector General, which discovered the texts, and said that they were “indicative of a biased state of mind” on Strzok’s part. They also implied “a willingness to take official action to impact the presidential candidate’s electoral prospects.”

In his opening remarks at the hearing, Strzok rejected the allegations that political bias creeped into his investigation.

“But the fact is, after months of investigations, there is simply no evidence of bias in my professional actions,” he testified. 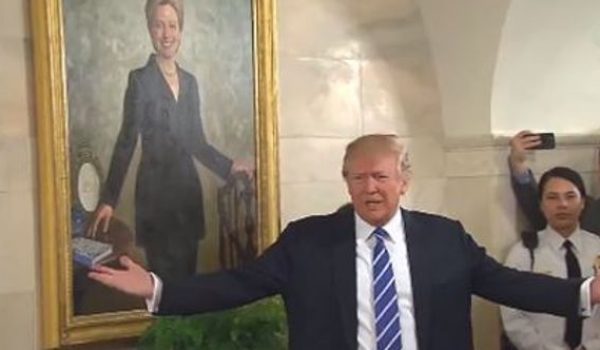 On way to SCOTUS announcement, WH reporters deliberately marched past Hillary Clinton portrait
Next Post
Peter Strzok channels Marisa Tomei from ‘My Cousin Vinny’ (and not in a good way)