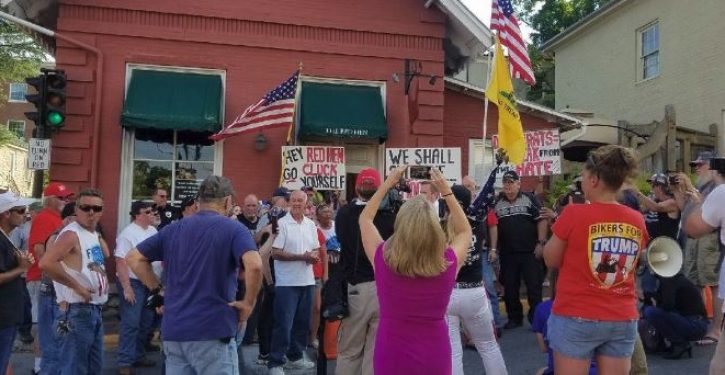 Marching with signs protesting Lexington, Va.’s Red Hen restaurant, demonstrators assembled outside the restaurant on July 5, the day of its reopening. Those who showed up are still angry over the eatery’s shabby treatment last month of White House Press Secretary Sarah Sanders.

Signs that read “Hey, Red Hen, go cluck yourself” and “Red Hen: Martin Luther King weeps” were carried by protesters to mark the restaurant’s “reservation only” resumption of business.

A large contingent of Bikers For Trump and other pro-Trump groups were on hand to react to Red Hen’s decision to refuse service to Sanders and her party on June 23 on the grounds that she works for President Donald Trump. Talk about guilt by association.

A small number of liberals were present for the reopening. Contrary to the “love and tolerance for everyone” they claim ownership of, the counter-protesters told reporters that they not only condoned Red Hen’s anti-American discrimination but were in full support of it.

A sign in Red Hen’s window claimed that the restaurant was booked for the evening. It was reported that one large party had booked the restaurant, likely a liberal group showing its support for Red Hen’s reprehensible behavior.