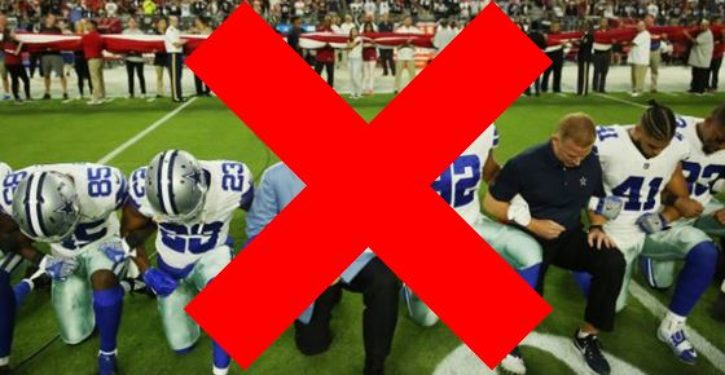 Talk about your about-faces! Back in 2016, the NFL announced it was down with kneeling during the playing of the national anthem, and to make sure all of footballdom understood where its ideologies lie, the league also announced it would fine players who honored 9/11 victims.

In league with the league, the networks that broadcast professional football opted not to show angry fans booing their disapproval while petulant multimillionaires dissed the nation.

Then came the real rebellions. Miami police drastically cut security at Dolphins home games, while the Indiana state legislature considered a bill that would require the Indianapolis Colts to offer fans refunds if Colts players knelt during the national anthem at home games.

As viewership and attendance declined, NFL Commissioner Roger Goodell began to rethink his politics. On Tuesday, team owners announced they were thinking about imposing a 15-yard penalty on teams that took a knee.

Today the other shoe dropped. From ESPN:

NFL owners have unanimously approved a new national anthem policy that requires players to stand if they are on the field during the performance but gives them the option to remain in the locker room if they prefer, it was announced Wednesday.

The policy subjects teams to a fine if a player or any other team personnel do not show respect for the anthem. That includes any attempt to sit or kneel, as dozens of players have done during the past two seasons. Those teams will also have the option to fine any team personnel, including players, for the infraction.

Goodell himself weighed in, telling reporters:

Then, because he’s the weenie he is, he added, “[but] we were also very sensitive to give players choices.” ESPN didn’t ask for clarification about the choices or, if they did, chose not to print it.

Goodell concluded by asserting that “it was unfortunate that on-field protests created a false perception among many that thousands of NFL players were unpatriotic. This is not and was never the case.”

On the contrary, it did, and they were.

It will be fascinating now to see how the players react to this dictum. 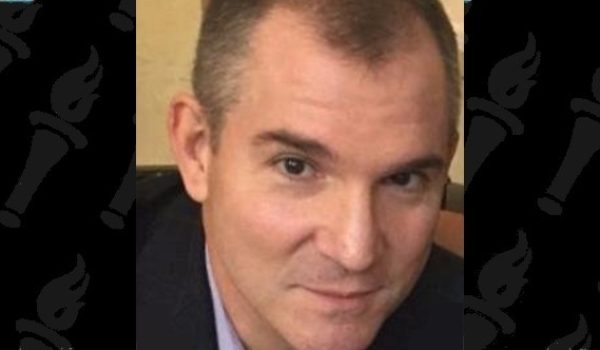