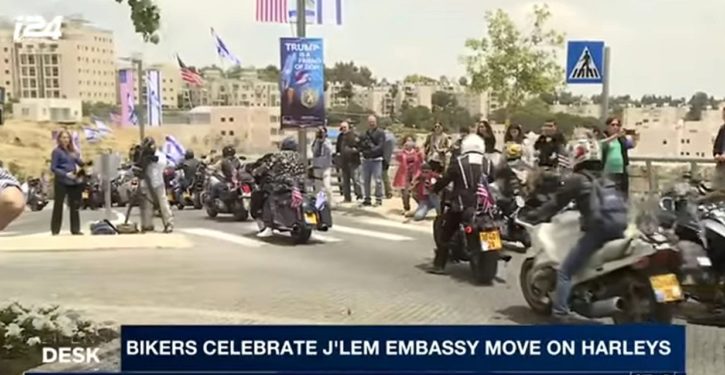 The Harley bikers' group "Samson Riders" celebrates the move of the U.S. embassy with a ride from the old embassy building in Tel Aviv to the new building, formerly the U.S. consulate, in Jerusalem. (Image: Screen grab of i24 video, YouTube)

A great deal has been written about it elsewhere, for good or ill.  (See, for example, the compelling and heartfelt post by our contributor Jeff Dunetz.)

I am proud that America has finally done this – and humbled that our nation has the stature that makes it so significant.

I am happy indeed for the people of Israel, for whom it means so much.

I think it’s hard to process, for people who don’t see it as part of a geopolitical trend we humans are not fully in control of.  It has been received wisdom for some time now – although really not that long, against the panoramic timeline of history – that the status of Jerusalem is too contentious to be addressed through the relatively simple process of “recognizing a capital city.”  Yet Trump has moved our embassy there, and affirmed that Jerusalem is the capital of Israel.  And here were no dragons, after all.

Benjamin Netanyahu reminded us in his speech on Monday that when the U.S. promptly recognized the newly-declared State of Israel 70 years ago, on 14 May 1948, it took President Harry S Truman ignoring the objections of many in his own administration to get it done.

Somehow, America has done the right thing at key junctures.  Donald John Trump, born in June 1946, was not quite two years old when Truman issued his recognition of Israel’s independence.  It would have occurred to no one, I am fairly sure, that 70 years later, that toddler’s face would appear on a giant screen at a building in Jerusalem, and that he would announce the opening of the U.S. embassy that at last confirms America’s commitment to the city as Israel’s capital.

We have the embassy in Jerusalem for one reason. @realDonaldTrump made the decision and we watch his message on the screen today. pic.twitter.com/dhBzS6ZO5j

The Lord works in mysterious ways.  The Bible doesn’t say that – not in those words – but people certainly do.  The point, even more than the mystery of it, is that He is at work.

There was a discordant note for me in this event, and that was the Fox News Channel coverage, which kept cutting out of the speeches and blessings in order to feature talking-head commentary.  We got all of Trump, Jared Kushner, and Netanyahu, but I would have liked to hear the others too.  (It was streaming live, no doubt, but it was shortly after 6:00 AM here, a time when it’s just better to press a button on a remote and have the TV do the work for you.)

At any rate, if you didn’t get your fill either, here is a video of the complete ceremony, without news studio interruptions and talk-overs.

Turkey protests U.S. embassy in Jerusalem by recalling ambassadors to U.S., Israel
Next Post
Somali refugees in MN using kids to rip off millions in taxpayer dollars to send to terrorists