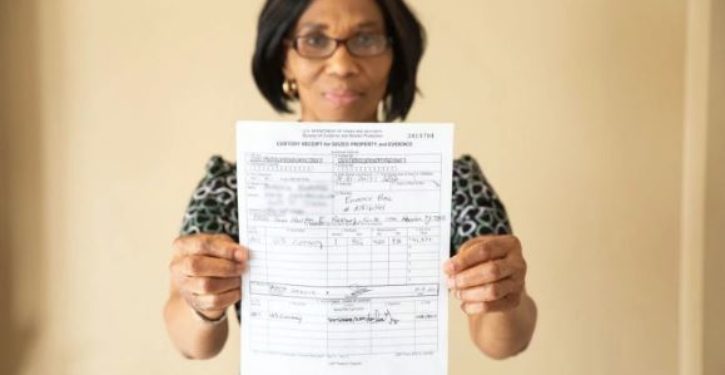 Nwaorie shows receipt for her cash from U.S. Customs and Border Protection (Image: Anthonia Nwaorie via The Washington Post)

As presented by Washington Post reporter Meagan Flynn, the story sounds at first blush like another airport outrage. This time the “victim” was a 59-year-old registered nurse, originally from Nigeria and now living in Katy, Texas, where in the 24 years since becoming a U.S. citizen she managed to save tens of thousands of dollars toward a beneficent goal: to return to her African homeland and open a medical clinic.

Last October, the woman, Anthonia Nwaorie, was on the verge of realizing that dream. Then agents with U.S. Customs and Border Protection (CBP) at the airport in Houston stepped in to quash it. As Flynn tells it, Nwaorie “had more than $37,000 in her carry-on bag and $4,000 in her purse”:

It was all cash, stowed in separate envelopes, some of it earmarked to help ill or aging family members. In her checked luggage she packed medical supplies and over-the-counter medication, which she planned to use to provide free basic care and checkups to anyone who needed it.

Putting aside the irrelevant details — the “aging family members” and the “free basic care to anyone who needed it” — the picture described is a curious one. A woman shows up at airport customs with her pockets stuffed with cash, tens of thousands of dollars of it. Why wouldn’t agents be suspicious and ask questions? They did:

The officials also asked her how long she had been in the United States, which one gathers from Flynn’s tone is supposed to be some kind of big insult. Anyway, Nwaorie showed the agents her U.S. passport. Then she was taken to a room where her luggage was searched.

Finally, the officials confiscated the cash.

There is a genuine outrage addressed in the story. It is that six months after the fact, the agency still has not returned Nwaorie’s money. On this point, Flynn goes into abundant detail about the government’s lassitude, about how in April CBP agreed to return the cash if Nwaorie signed a “hold-harmless agreement,” about how she has since lawyered up and is filing a federal lawsuit.

As for the rest of it — Nwaorie’s feeling like “a criminal … so humiliated, so petrified,” this she brought on herself. As Flynn explains:

According to the agency’s website … if a traveler is carrying more than $10,000 in currency they [sic] must fill out a declaration, a rule she [Nwaorie] said she did not know existed. [Emphasis added]

Ignorance of the law is no excuse. Plus, if you read a little further at the CBP website, you find this:

“The U.S. attorney’s office in the Southern District of Texas did not bring a civil asset forfeiture case against her or charge her with any crime,” Flynn writes. But they could have.

Other questions that cry out for answers but are not raised in the Post article include the following: Why was Nwaorie carrying her fortune in cash? Are there no banks in Nigeria that she could wired a sum that large to? Also, was she planning to stow the carry-on bag in a compartment above her seat with everyone else’s luggage? If so, how confident was she that the money would still be there at the end of the 13-and-a-half-hour flight — that someone might not inadvertently walk off with the wrong bag?

In the end, there’s no denying that Nwaorie’s story is tragic. So far she has been unable to open her clinic and describes her life as a nightmare. But it could have been a far worse nightmare had the Post headline instead read “Nurse planning to open medical clinic in Nigeria loses the $40K in cash she carried onto airplane.”

Obama worries ‘our values’ under President Trump ‘are not being upheld’
Next Post
Cartoon of the Day: In accord 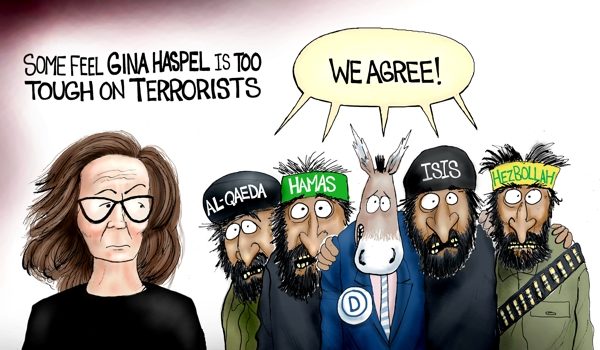