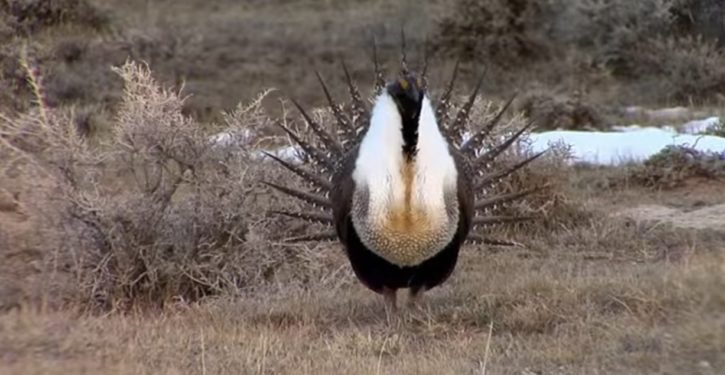 The Department of the Interior released a draft plan Wednesday after the Trump administration’s review of the sage grouse conservation plan developed under former President Barack Obama, The Washington Examiner reports.

The draft rolls back federal involvement in the current conservation plan, which spans millions of acres over 11 states. The Trump administration’s proposal would give more flexibility and control to state and local interests and allow for greater resource development within the habitat area.

“Wyoming has been the leader on sage grouse conservation efforts for years,” GOP Sen. John Barrasso, chairman of the Senate Committee on Environment and Public Works, said in a statement. “I appreciate that the Department of the Interior has worked with Governor Mead and other Wyoming local leaders in this process. I will review this draft environmental impact statement and will continue to work with the agency, so a solution can be reached that is best for the people of Wyoming and the sage grouse.”

The draft is open for public review and comment through Aug. 2. Environmental groups offered responses almost immediately, however.

“Today’s decision by the Department of the Interior sows uncertainty across the West and threatens the spirit of trust and cooperation that culminated in the largest conservation effort in American history,” Audubon Society’s Sagebrush Ecosystem Initiative Director Brian Rutledge said in a statement.

“Protecting sagebrush habitat is the key to protecting the Greater Sage-Grouse and avoiding further fragmentation of an iconic landscape,” Rutledge added. “Any new plans that reduce conservation commitments not only put the sage-grouse at risk but also threaten local economies and a way of life.”

The U.S. Fish and Wildlife Service announced in 2015 that the sage grouse would not be listed under the Endangered Species Act (ESA), largely due to a coordinated effort between state, local and industry interests to implement a conservation plan for the bird. The agency found that, in light of the conservation efforts then being undertaken, the bird did not need the level of regulatory protection activated by an ESA listing.

Hillary Clinton says ‘socialist’ Dems cost her the election. She doesn’t know she’s one of them
Next Post
Reminder: The Mueller investigation is neither due process nor the rule of law