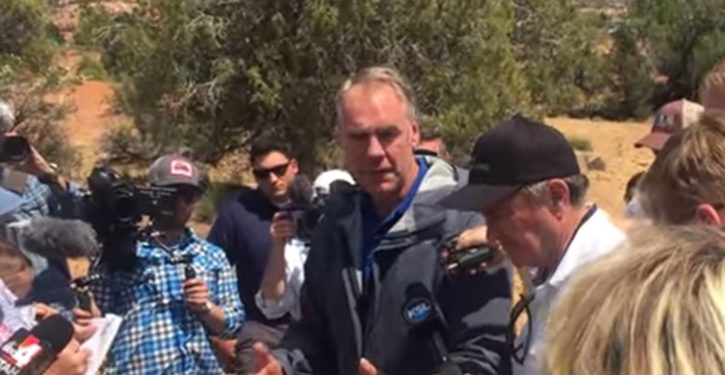 Scott Pruitt is wrapping up his worst month of press and scandal since agreeing to run the Environmental Protection Agency; and Democrats, unable to oust Pruitt, are now targeting another member of President Donald Trump’s cabinet, E&E News reported Monday.

“Secretary Zinke absolutely belongs in the same breath as Administrator Pruitt when it comes to wasting taxpayer money and the ethical troubles and conflicts of interest and the transactional approach to leadership,” Center for American Progress Senior Fellow Matt Lee-Ashley told E&E News.

Lee-Ashley also served as deputy chief of staff in the Department of the Interior (DOI) under former-President Barack Obama.

“These two gentlemen are the most effective at draining the swamp that [Trump] has, so the attacks on them are not surprising — but the petty nature of these attacks show they’re grasping at straws,” Western Energy Alliance President Kathleen Sgamma told E&E.

While Pruitt has held the spotlight for much of April for spending on security and first-class travel, Zinke has dealt with his own criticisms from public officials and the press.

Zinke’s office, due for a renovation, nearly cost the DOI $139,000 to outfit it with new doors. After learning of the expense, Zinke negotiated the price down to $55,000, the secretary said. The expense of the doors was largely due to regulations governing any restoration done to historic buildings and structures, Zinke’s office told The Daily Caller News Foundation.

Zinke also took heat for chartered flights he booked at taxpayers’ expense. The flights, which included one to an airport near his home in Montana, were all pre-approved by ethics officials and booked only after checking that no commercial flight was available.

Zinke has defended his transportation spending by comparing it to that of former-Interior Secretary Sally Jewell. Jewell spent $385,438 on chartered flights over a three-year period, according to Interior department records TheDCNF reviewed.

Politicians and the press have also taken shots at Zinke for his rhetoric.

Zinke allegedly told Interior staff “diversity” is not important. “What’s important is having the right person for the right job,” Zinke said, according to staffers. “I care about excellence, and I’m going to get the best people, and you’ll find we have the most diverse group anyone’s ever had.”

Reports have centered on Zinke’s claim he is a geologist. The secretary has never held a position as a geologist, however, Zinke earned a degree in the subject from the University of Oregon before he served as a Navy Seal.

Other reports have dug up segments from a radio show Zinke hosted. Reports have also pulled clips from a couple men who raised conspiracy theories while on Zinke’s show.

Despite all the negative attention, Zinke has fared far better than Pruitt in staving off potential scandal.

“The threat of actually reining in EPA is so much more threatening to the environmental lobby; it’s not surprising that that’s what they’re [attacking first],” Sgamma told E&E.

Though Pruitt’s critics have not secured his ouster, Zinke may take the spotlight soon, environmentalists warn.

“What you’re seeing from whistleblowers from inside EPA has been very effective. We’ve seen some of that from inside Interior. But if I were Secretary Zinke, I’d be very worried about more,” Center for Western Priorities Media Director Aaron Weiss told E&E.