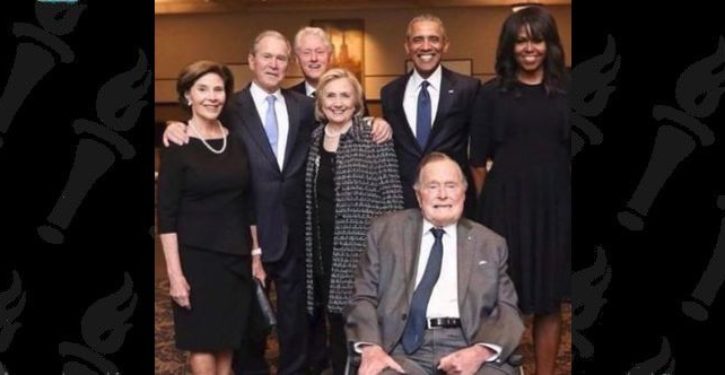 Republicans don’t have to lift a finger to prove how repulsive Democrats are. They are proving it themselves each and every day.

Consider the photo above, published online by the Lubbock County (Texas) Democratic Party. Great picture, right? It shows four generations of U.S. presidents and, except in the case of George H. W. Bush, their wives. Pres. Bush, the Elder’s, wife wasn’t able to pose for the photo, mainly because it was taken at her funeral.

But the picture tells an incomplete story. To understand why, compare it with the one below. It is the same photograph, but in this case it is uncropped, revealing that the current first lady, Melania Trump, was also in attendance to pay her and her husband’s respects.

The Lubbock County Democratic Party insists the omission of Mrs. Trump was an “innocent mistake.”

Not everyone on Twitter was willing to buy that explanation.

This is what democrats do best! They are experts on doing things like this and then they call it “an honest mistake”. Democrats have never been honest! They don’t know the meaning of the word “honest”. They are dishonest on everything they do!

One person took a whimsical approach to what was obviously a shenanigan, regardless of what the Dems claim.