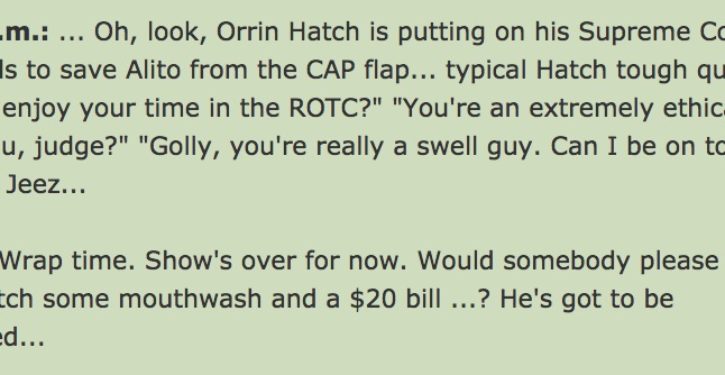 MSNBC host Joy Reid has called in the FBI to investigate her claim that hackers placed anti-gay remarks and jokes on her now-defunct blog between 2005 and 2007. But an analysis by The Daily Caller News Foundation and a cyber security expert raises serious doubts on the veracity of her claims.

On April 19, left-wing Twitter user @Jamie_Maz published archived posts of Reid’s old blog, The Reid Report, showing her accusing prominent political figures of being gay, saying she was repulsed by the thought of sex between two gay men, and describing herself as “probably” homophobic.

The posts were similar in substance to homophobic posts that Reid admitted to writing about former Florida Gov. Charlie Crist. Reid apologized to Crist on Dec. 3 for the “insensitive” posts that referred to Crist as “Miss Charlie” and accused him of being gay.

After Mediaite asked Reid about the most recent posts, the MSNBC host released a statement Monday indicating that unknown, anonymous hackers had fabricated the anti-gay posts.

NBC has not yet taken a position on the controversy.

Tuesday night, the network released to TheDCNF a Dec. 19 letter that Reid’s attorney sent to the Internet Archive — a nonprofit that maintains cached versions webpages — and a Dec. 22 letter to Google’s parent company, Alphabet. Both letters demanded the companies remove archived pages of her blog. The letters are dated Dec. 17 — exactly two weeks after Reid apologized.

NBC also released an undated statement from Reid’s “security consultant,” Jonathan Nichols, who claimed the two letters contained “evidence” of hacking. Nichols’ statement and the two letters are included in full at the bottom of this article.

The letters pointed to several posts on Jan. 10 and 11, 2006, that they said were “fraudulent.” Online archives maintained by the Library of Congress and reviewed by TheDCNF show that the challenged entries were indeed posted on Reid’s blog on those two dates in January.

The posts, which Reid claims she didn’t author, were included in her liveblog of the Alito hearings. Reid’s lawyer conceded that Reid authored the rest of the liveblog but claimed hackers inserted the two crude entries about Hatch.

For Reid’s account to have any merit, she would have had to have been hacked at the time that she was blogging, without her — or anyone else — noticing until this past December.

Cybersecurity expert Jason McNew, who spent 12 years working for the White House and Camp David under Presidents George W. Bush and Barack Obama, was highly skeptical of Reid’s hacking claims in an interview with TheDCNF.

Furthermore, the posts that Reid’s lawyers claimed are “fraudulent” are not the same posts that Mediaite asked about and that she blamed on hackers.

“The actual facts of this might never come to light,” McNew said. “Why would you go through all that effort? It sounds like baloney to me. When data like this is archived, there might be other copies in Google database, or in Bing’s data base, there might be additional copies that would disprove what she’s saying.”

“I don’t think in terms of targeting [Reid] the juice doesn’t seem worth the squeeze. Why would you go through such a thing?” said McNew.

Proving Reid’s case, McNew argued, would requiring digging up up over decade-old data and proving tampering took place — something neither Reid or her hired expert have done.

“Her claims are incredulous to say the least. Proving what she’s saying with any certainly would be extremely difficult.,” McNew said. “People’s viewpoints have changed a lot [in the last 25 years].”

Further undercutting Reid’s claim is that on social media she repeatedly exhibited the same behavior — such as accusing her political opponents of being closet homosexuals — that she blamed on hackers.

Reid repeatedly claimed right-wing author Ann Coulter is secretly a man and derided her as a “drag queen.” In a July 23, 2010 tweet, Reid corrected a CNN reporter who referred to Coulter as “her.”

According to Reid, the reporter should have called Coulter “shim” — a combination of “she” and “him” — instead of referring to her as a woman.

Reid doubled down in another tweet that same day, describing Rush Limbaugh’s wife as his “beard,” implying Limbaugh married his wife to cover up the fact that he is, according to Reid, secretly gay.

Five months ago, we found evidence Joy Reid’s now-defunct blog, The Reid Report, was breached after a review of suspicious activity.

We discovered that login information used to access the blog was available on the Dark Web and that fraudulent entries – featuring offensive statements – were entered with suspicious formatting and time stamps. The posts included hate speech targeting marginalized communities and Ms. Reid has been explicit in condemning them.

Some of the posts in question were made while Ms. Reid was on the radio hosting her show. Text and visual styling was inconsistent with her original entries.

In December, shortly after the review, Ms. Reid’s attorney wrotetoarchive.org andBlogger.com to advise them that the blog had beencompromised, and that the pages appearing in the Wayback Machine archive included fraudulent posts.

The letters detail the evidence that many of the blog posts were made up, including the times posted (times when Ms. Reid hosted her radio show), unusual structure and anomalies within the posts and ghosting around images.

We also askedBlogger.com for forensic data such as time stamps, IP addresses, and User-Agent data which would help us to learn more about the posts and where the fraudulent poster might be located.Blogger.com told us the data was not available. At no time has Ms. Reid claimed that the Wayback Machine was hacked, though early in our investigation, we were made aware of a breachatarchive.org which may have correlated with the fraudulent blog posts we observed on their website. We simply wanted to ascertain whether that breach as related to the compromising of Ms. Reid’s blog.

Once our team determined that the two intrusions were unrelated, we merelyattempted to have the fraudulent posts removed fromarchive.org. They refused this request.

However, we have significant evidence indicating that not only was Ms. Reid’s old blog compromised, some of the recently circulated posts were not even on the site at any time, suggesting that these instances may be the result of screenshot manipulation with the intent to tarnish Ms. Reid’s character. Oddly, there were no responses in the comments section of the entries, despite the inflammatory nature of the posts. If those posts were real, they would have undoubtedly elicited responses from Ms. Reid’s base. There was also no contemporaneous verification or memory from Ms. Reid’s peers or individuals she regularly debated online.

As a result we are continuing our own investigation and cooperating with federal law enforcement in their attempt to identify the source of this activity.

Jonathan Nichols is an independent security consultant. He has played a role in predicting, detecting, and mitigating some of the largest hacking campaigns in recent years. As part of Operation Iraqi Freedom and Operation Enduring Freedom, Jon spent three years deployed in support of NATO Special Operations. Jon has years of experience in building cyber security teams which focus on the humans behind the keyboards and the underlying influences which motivate their actions. He can be seen discussing cyber security topics on CNN and Vice documentaries, and regularly contributes to many mainstream media articles on cyber security issues. 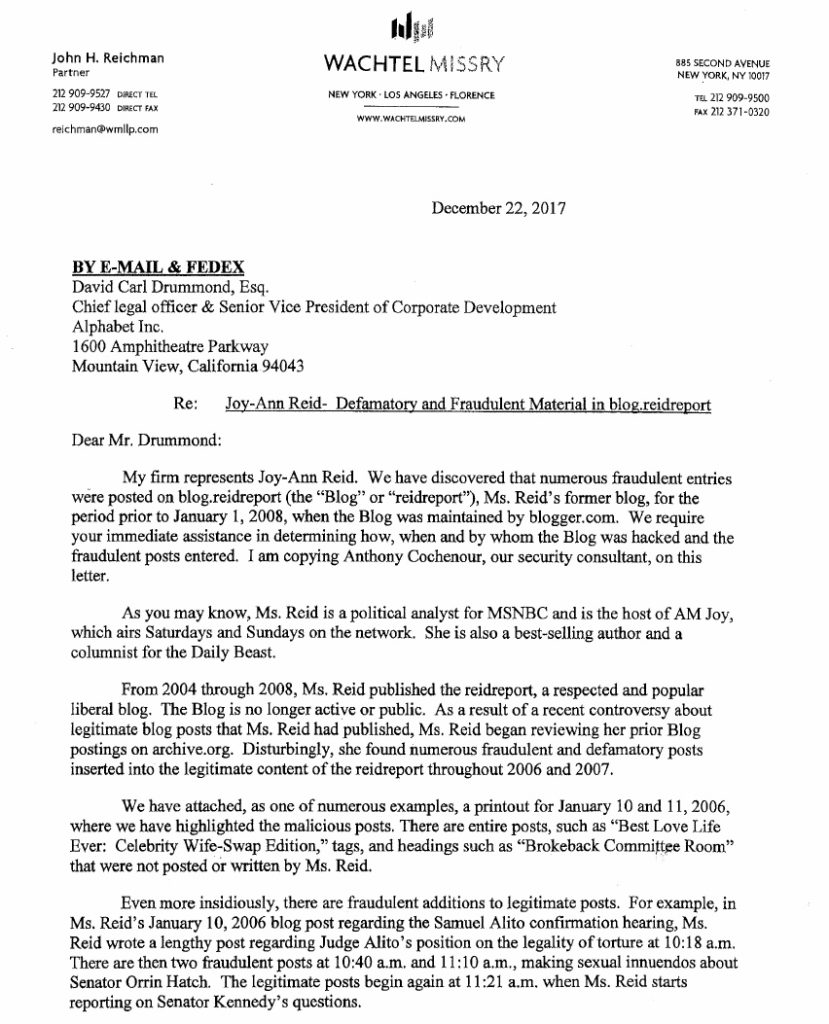 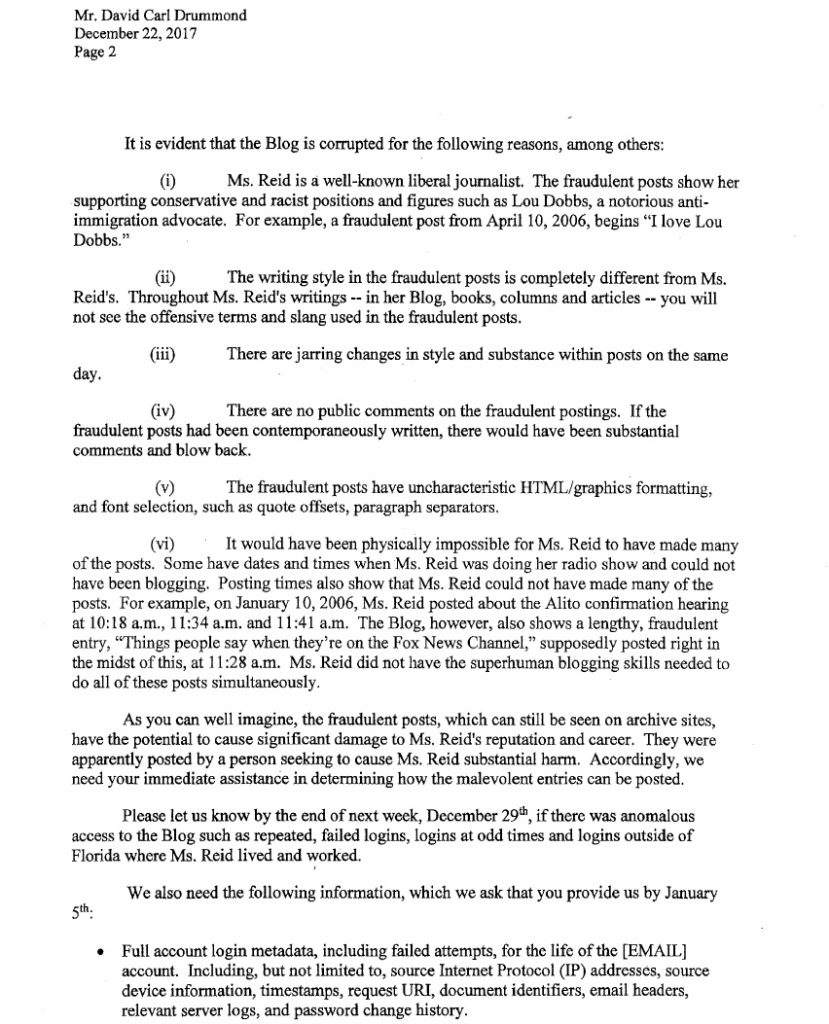 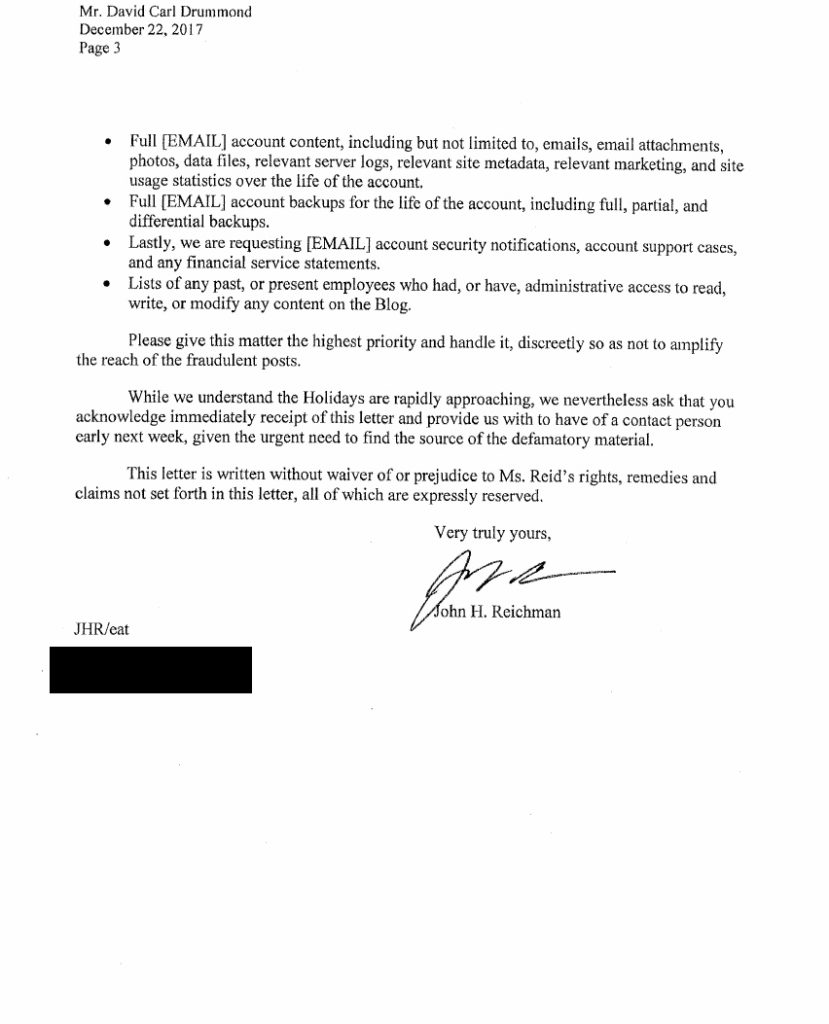 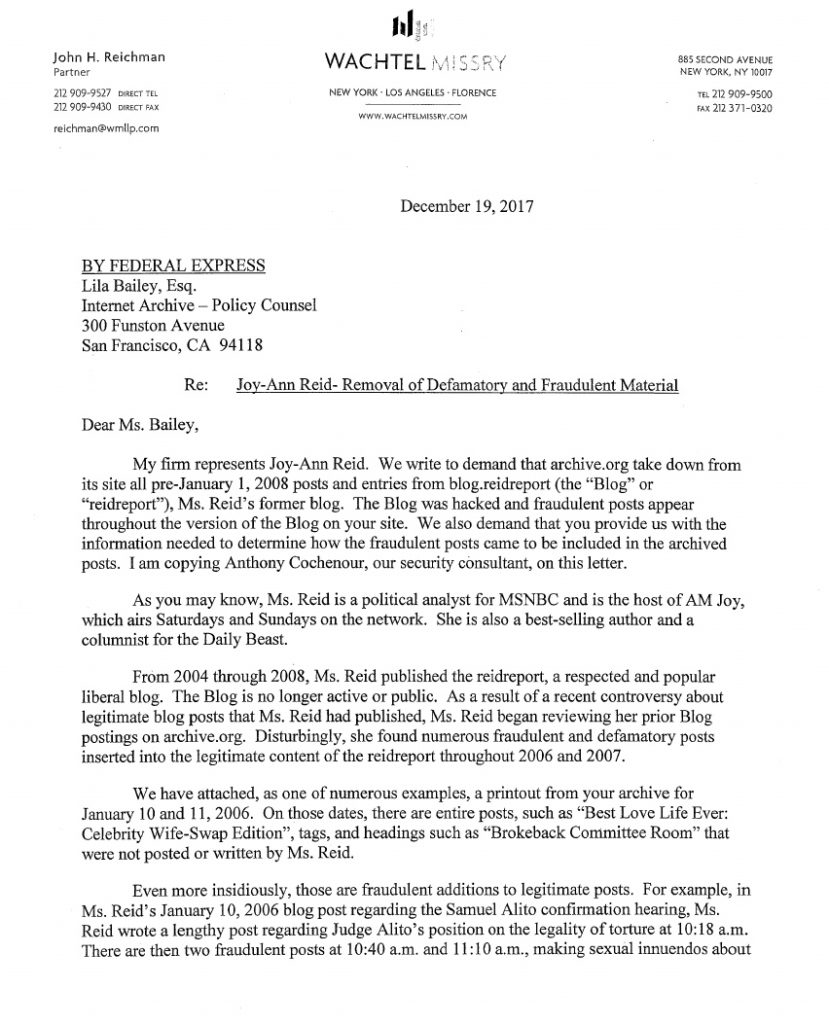 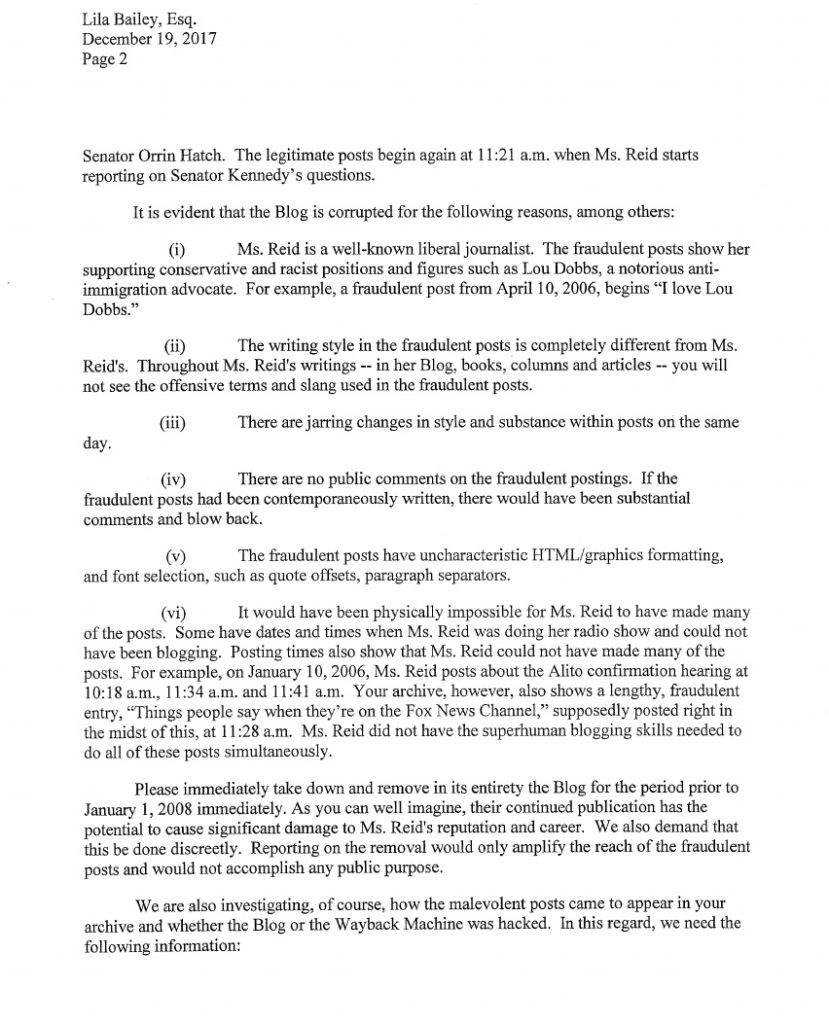 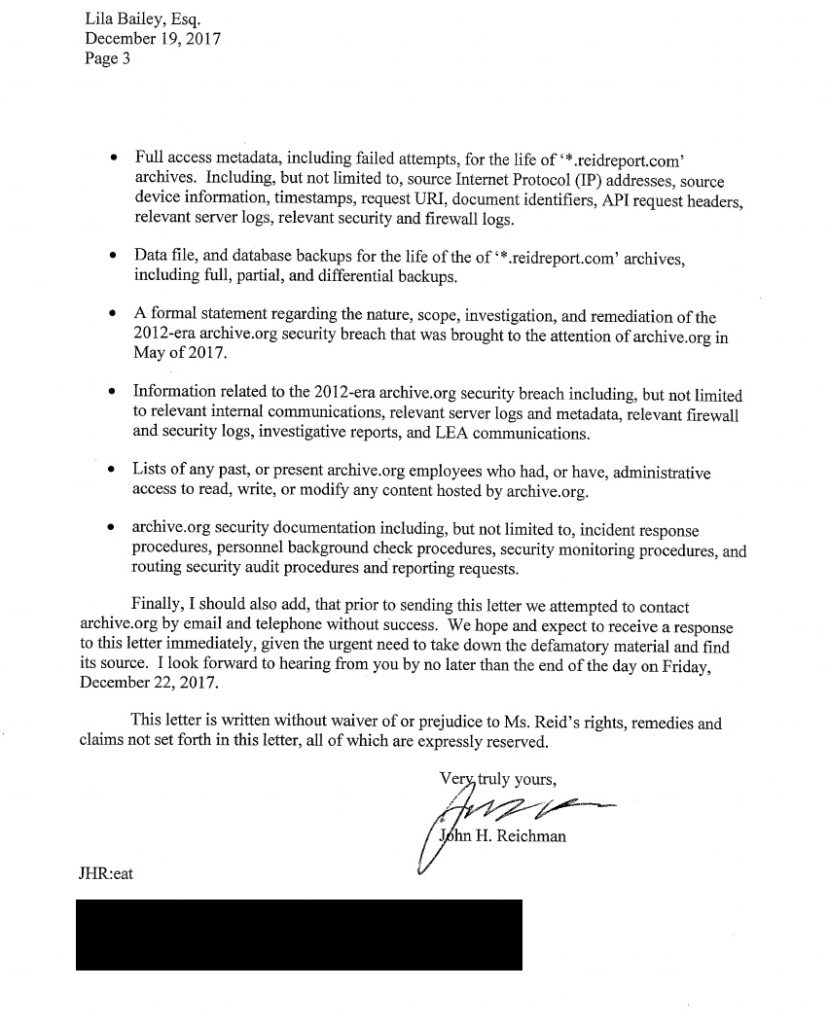 This report, by Peter Hasson, was cross posted by arrangement with the Daily Caller News Foundation. Joe Simonson contributed to this report.