It is an understatement to observe that things haven’t been going well for the Democrats of late. In a must-read piece at National Review, Victor Davis Hanson catalogs all that has gone right for the country and wrong for the Resistance in the sixteen months since Donald Trump took office.

Robert Mueller’s witch hunt has all but fizzled, as have efforts to remove the president from office under the 25th Amendment.

All the while, consumer confidence has been on the rise as the economy springs back to life, and arch-enemy North Korea appears to be on the verge of disarming itself. These developments would thrill Democrats as much as they do the rest of America if they had happened on Barack Obama’s watch.

But a recent development on the social media front could be the seeds of a revolution the Dems have been dreading since the 15th Amendment was ratified. Blacks, who have voted lock-step with the party for better than half a century, appear on the verge of declaring their political independence.

It all started with a tweet last week by rapper Kanye West that said simply, “I love the way Candace Owens thinks.”

Owens, for those unfamiliar with the name, is a conservative commentator who has urged her fellow blacks to shed the victimist mindset and practice self-reliance.

Liberals, who have much invested in keeping black voters in tow, immediately lashed out at Owens and upbraided West:

Aside from being an insane alt right race pimp Candace Owens thinks Donald Trump is literally the messiah not you @kanyewest so you might want to reconsider https://t.co/dKVnbi3Ila

But West was having none of it. He proceeded to fire off a series of tweets decrying the mob mentality and (perish the thought!) pledging his allegiance to Donald Trump:

You don't have to agree with trump but the mob can't make me not love him. We are both dragon energy. He is my brother. I love everyone. I don't agree with everything anyone does. That's what makes us individuals. And we have the right to independent thought.

It gets worse. Later the same day, another high-visibility black entertainer, Chance the Rapper, followed suit with a tweet of his own:

Black people don’t have to be democrats.

As the Daily Wire notes, the tweet is not an endorsement of Republican ideology. But for Democrats it’s worse than if it had been. The message is “an expression of support for freedom of thought.”

The tweet lit up the internet, receiving over 100,000 likes in the space of an hour. Not all of the reaction was positive, however. Plenty of people accused Chance of selling out and supporting a “white supremacist.”

It’s not about that though, Chance. It’s about the fact that he is supporting who a man who time and time again has proven to be a white supremacist, a sexist, an Islamophobe, a homophobe, a transphobe and a xenophobe.

But that tweet, by a white liberal, is merely an attempt to protect the Democratic Party’s investment in — to quote the eminent tactician Joe Biden — keeping black Americans “in chains.”

It’s only been a few days since this whole kerfuffle started. But imagine how delicious it would if this turns out to be the “revolution” the Left has been threatening.

The Kanye Effect: Chance the Rapper says ‘black people don’t have to be Democrats’ and internet melts
Next Post
Actor who plays Indian-American convenience store owner on ‘The Simpsons’ fine with scrapping character 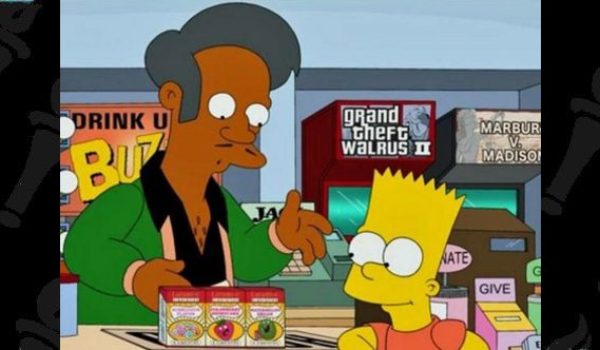