Here’a a hint. The station’s unintentionally hilarious ad slogan is “Facts first.” Here’s another. In 2016, one of its correspondents gave the Clinton campaign an advance peek at the questions it would be asking in a debate the network was hosting.

By now you surely guessed that it’s CNN, whose own Alisyn Camerota and Brian Stelter devoted a segment on “New Day” Tuesday to a discussion of what it takes to be an ethical journalist. Exhibit A in the discussion was the revelation from a day earlier that Fox News host Sean Hannity has a connection to President Donald Trump’s attorney Michael Cohen.

“In terms of journalism, the rules of journalism that we follow, there’s something called full disclosure and it works like this,” Camerota said. “When you have a previous relationship with someone, you say something to the effect of ‘I worked at Fox News for many, many years and know Hannity and always had a very pleasant relationship with him.’ So the viewers know where I’m coming from.”

“Hannity talked about Michael Cohen a million times,” she continued. “He never disclosed to his viewers that they have this relationship where he seeks legal advice from him. But Hannity gets to play with the facts in terms of whether he’s journalist or not and he’s said both. Does it matter if he’s not a journalist, should he have had to have disclosed all of that?”

Stelter thinks Hannity should have disclosed the relationship to his viewers but said the Fox News host should not be considered a journalist.

“The disclosure for me about Hannity is that he calls me Humpty Dumpty for some reason,” Stelter said. “Don’t know why and I enjoy covering him. I think he’s a really interesting phenomenon because he does blur these lines. He says he’s not a journalist. Says journalism is dead and yet he calls his show real news and has anonymous sources.”

Stelter said Hannity tries to be both an entertainer and a newsman and gets lost somewhere in between.

“He’s an entertainer but on a channel with the logo in the corner that says news on the bottom of the screen,” Stelter added.

The description should sound at least vaguely familiar to Stelter. He too works for a network that also features an on-screen logo, one of whose letters stands for “news.” The only difference is that Stelter does fancy himself a journalist, even though by his own admission he allows his guests to lie in order to promote a liberal agenda. 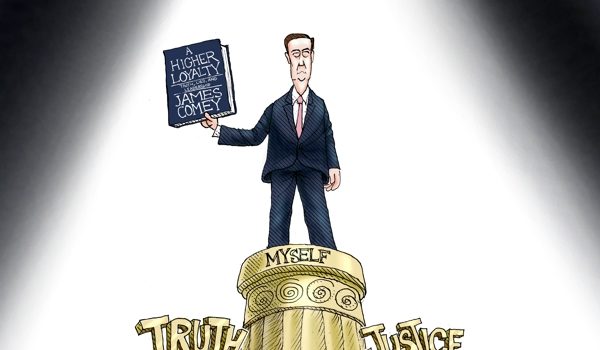