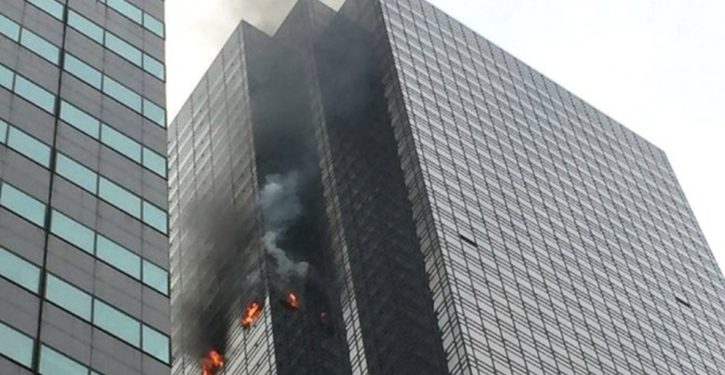 As noted in this space yesterday, a fire broke out in Trump Tower, killing one. Before turning to the reaction from the Left to this tragedy, a few points are worth emphasizing.

First, the man who died was not Donald Trump, who was in Washington when the fire broke out. Second, the blaze erupted on the fiftieth floor of the building, making it impossible for firefighters to manage or extinguish the flames using normal protocol, such as ladders. The fire could have easily spread out of control, resulting in a disaster of epic proportions.

So how did opponents of the president (aka Trump haters) respond when they received the news? Here’s has-been music legend David Crosby, who last November tweeted, “If you’re a Trump dummy and you don’t like progressives Don’t come to my show a**hole.”

I would have posted the original tweet, but Crosby deleted it shortly after it was posted.

Some of Crosby apparent fans also shared their thoughts on social media:

#trumptower is on fire and all I want to do is pop some popcorn and watch it burn. pic.twitter.com/9103AlOqmH

@FBI I promise it wasn’t me LOL but I swear I’m prophetic… 3 days ago I asked who wanted to set the trump tower on fire with me in NYC and then this happened…. ???????? pic.twitter.com/zCQZAsGfi3

Some people ascribed ulterior motives to the president:

This is an insurance scam on Trump's part.
Fire breaks out at Trump Tower in New York https://t.co/PFeJF2opED

As noted earlier, Trump was nowhere near the Manhattan building when the fire broke out, but that didn’t prevent one obviously high-information voter from posting this:

It wasn’t only the unwashed, however, who expressed opinions of the sort liberals once famously decried. Here is an embedded, now-defunct tweet by a man who identifies himself as a mental health counselor.

I now understand why there is a mental health crisis in this country.

People who say they “get excited” and “hope for major damage” at the sight of #TrumpTower catching on fire are MENTAL HEALTH COUNSELORS!

Well, at least we can agree on one thing…#trumptower pic.twitter.com/UrsBwOyuAp

Saturday’s fire was not the first this year. In January, three people were injured when a fire began in the building’s cooling unit. The reactions were every bit as obscene:

TRUMP tower on fire — Dancing in the streets!!

The fire at #TrumpTower is a foretaste of the eternal damnation awaiting him.

Try not to remind liberals that they are the party of civility. It makes their heads hurt.

Facebook donated to 46 of 55 members on committee that will question Zuckerberg
Next Post
MSNBC analyst fantasizes about Trump being arrested by U.S. marshals