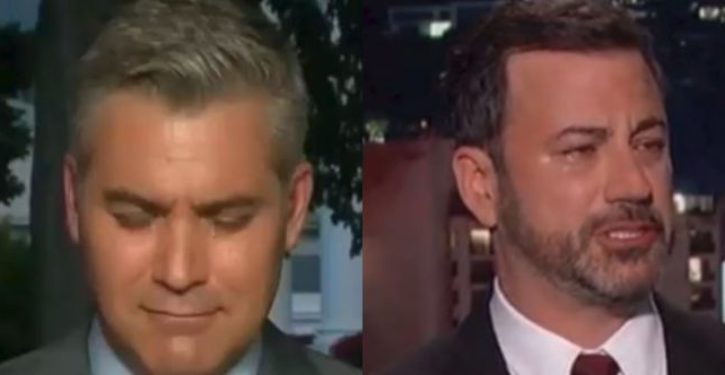 On Sunday CNN Chief White House Correspondent Jim Acosta did his best Easter Grinch at the White House Easter Egg Roll, firing “gotcha” questions at President Trump while he and his family were busy coloring with small children in attendance.

When Trump campaign manager Brad Parscale took Acosta on Twitter for attempting to sully the mood of a children’s event, Acosta foolishly hid behind the Constitution:

Just doing my job.. which is protected by the First Amendment of The Constitution. You might want to give it a read. https://t.co/lbUZmxGPJO

Who knew the First Amendment protected the rights of Americans to be public nuisances?

But as rude as Acosta was, his behavior paled next to that of late-night “comedy” host Jimmy Kimmel, who played excerpt’s from First Lady Melania Trump’s reading aloud of a children’s book on Sunday for the sole malicious purpose of mocking her accent.

Needless to say, the louts who make up Kimmel’s studio audience on any given night got the “joke.”

Maybe for his next show, Kimmel can show himself to be an equal opportunity prankster by speaking a few sentences in a foreign language he’s mastered (yeah, right!).

If there’s one thing that Kimmel and Acosta have in common, it’s that both have produced crocodile tears on live television, Acosta after Trump had seated him in the back row of the White House press briefing room, Kimmel over the Republicans’ announced plan to replace Obamacare.

I would imagine that even Kimmel’s most loyal fans find it difficult taking seriously the heartfelt moments of a man who not long ago hosted a show where bikini-clad women jumped up and down on trampolines.

College paying students to promote abortion rights
Next Post
Trump: We will guard our border with the military