California Attorney General Xavier Bacera is busy, busy these days. As noted in a post in today’s LU Web Crawler, he is threatening to arrest the sheriff of Orange County for deciding to cooperate with the federal government and ICE officials at weeding out illegal aliens.

Specifically, the Sheriff’s Department announced Monday that it will publicly post the release dates of all inmates, not just those who are suspected of being in the country illegally. As Undersheriff Don Barnes explained in the announcement:

This is in response to SB-54 limiting our ability to communicate with federal authorities and our concern that criminals are being released to the street when there’s another avenue to safeguard the community by handing them over (to ICE for potential deportation).

SB-54, nicknamed the California Values Act, is intended to preserve the state’s sanctuary status by blocking the apprehension and, where appropriate, deportation of illegals. This law is itself the target of a lawsuit by the Trump administration.

As if Becera didn’t have enough on his plate, he also co-authored an op-ed in Monday’s San Francisco Chronicle, along with California secretary of state of the state of Alex Padilla, that argues that the administration’s plan to restore the citizenship question to the census is illegal.

“Including a citizenship question on the 2020 census is not just a bad idea,” Becera and Padilla write, “it is illegal.” One might reasonably infer from this allegation that the plan to include questions on citizenship is a novelty, invented by the corrupt Trump administration, which the authors further claim is “threatening to derail the integrity of the census.”

In fact, questions on citizenship were included on every census up through 1950, then vanished only to reappear on the 2000 census: 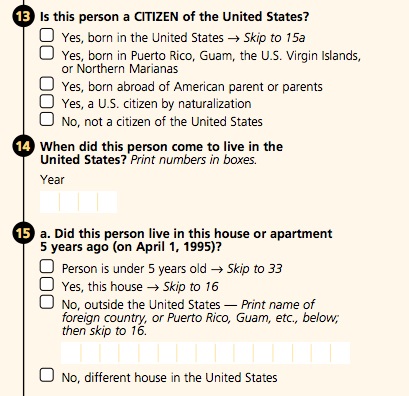 Becera and Padilla go on to assert:

The Constitution requires the government to conduct an ‘actual enumeration’ of the total population, regardless of citizenship status. And since 1790, the census has counted citizens and noncitizens alike.

The phrase regardless of citizenship again suggests that such a question is disallowed or would interfere with the “‘actual enumeration’ of the total population.” But according to the Census Bureau itself:

It is constitutional to include questions in the decennial census beyond those concerning a simple count of the number of people. On numerous occasions, the courts have said the Constitution gives Congress the authority to collect statistics in the census. As early as 1870, the Supreme Court characterized as unquestionable the power of Congress to require both an enumeration and the collection of statistics in the census.

In fact, if Becera and Padilla’s concern is for an accurate head count, they should welcome the addition of a question on citizenship. As Kansas Secretary of State Kris Kobach has noted:

Think of it this way. There are about 710,000 people in each congressional district. But, if half of the district is made up of illegal aliens, then there are only 355,000 citizens in the district. The value of each citizen’s vote in such a district is twice as high. [Emphasis added]

But when you get down to cases, Becerra and Padilla’s main beef is their belief that asking about citizenship “would discourage noncitizens and their citizen family members from responding to the census.” But a study released this week by the Center for Immigration Studies finds that the presence of such a question is unlikely to reduce participation in the 2020 census.