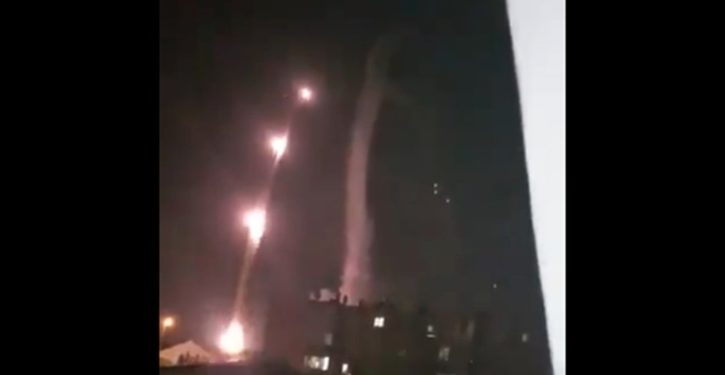 This may be nothing more than what’s being advertised.  But something is “off” about it.  The developments in Gaza and Lebanon are just a little odd over the last 24 hours.

The wrap-up here won’t be conclusive.  The bare bones are that at “dawn” on Sunday, 25 March, Israel reportedly “fired three missiles” into southern Gaza, near Rafah, in response to the entry of four Hamas operatives into Israel to “burn army machinery.”  (According to one regional report, the Israeli response was made with artillery.)

Gaza is said to be hosting an exercise by Hamas’ Izzedine Al-Qassem Brigades in preparation for a “mass protest” on Friday as Passover begins.  In an unusual move, the “exercise” was apparently announced beforehand.

According to the sketchy AP reporting:

Hamas detonated bombs, launched missiles and fired machine guns in the streets during the 24-hour exercise.

Delightful as this sounds for the residents of Gaza, it seems to have had an unusual result.  As the KUNA report linked above suggested, the missile launches don’t appear to have been aimed toward Israel (but rather, apparently, toward the sea).  On Sunday night, however, an Iron Dome battery reacted by firing a volley of interceptors from the vicinity of Ashkelon, on the northern Gaza border, when it was reportedly triggered by “gunfire” from Gaza.

(Multiple videos in the thread.)

Looking at the videos posted on Twitter, it’s possible that the “gunfire” was ground artillery fire, seemingly mortar fire if we go by the brief illuminations over the horizon in the background.

On the other hand, the summary of the Israeli response indicates that “IDF tanks hit two surveillance posts in northern Gaza in response to the gunfire.”  That may have been the source of the distant illuminations in the video.

“All the alarms were triggered by machine gun fire in Gaza. There were no rocket landings in Israel,” according to IDF Spokesperson Brig.-Gen. Ronen Manelis.

That doesn’t sound quite right to me, as I understand Iron Dome to be able to distinguish actual threats from non-threat “noise” – and certainly to avoid reacting to “machine gun fire.”  If Gaza was lobbing mortar rounds (or “missiles,” which were probably rockets) on a vector that excited Iron Dome, even if the projectiles weren’t directed at Israel, I assume an automated reaction could have occurred.  But it’s hard to see how Iron Dome could get confused by “machine gun fire,” which can’t go far enough or high enough (from Gaza to Ashkelon) for Iron Dome to even see it.

About two hours after the air defense sirens went off in southern Israel, a report came from Lebanon that people in the Baalbek region, near the border with Syria, heard loud explosions which they attributed to an air attack by the IAF.

Israel has not addressed the report, which is typical.  And Hezbollah has denied that any attack occurred.

It would be one thing if the IDF story about the Iron Dome intercepts hung together.  But it doesn’t.  There’s no knowing if we’ll get further elucidation in the coming days.  It’s quite possible that Iron Dome legitimately reacted to something.  But not to machine gun fire in Gaza.

If I had to construct a hypothesis with what we know now, I’d suspect that whatever was involved in this Hamas “exercise” in Gaza was something the IDF hasn’t seen before.  Perhaps it’s a new battlefield weapon (probably nothing exotic, but a capability that hasn’t been ordinary for Hamas up to now).  If it suggests that Iran, through Hezbollah, has supplied something new to Hamas, and that Hamas could be planning to use it in conjunction with the plans to disrupt Passover, that might prompt a visit from the IAF to a Hezbollah target in Lebanon.

That’s speculation, for the moment.  In the meantime, another high-ranking Iranian on Saturday took up the recent theme that Israel will be destroyed within 25 years.

Less than a week ago, an Iranian cleric – recently appointed as Ayatollah Khamenei’s representative to the IRGC – announced at a ceremony that “We are now ready for conquering Bait-ul-Muqaddas (Jerusalem) and wiping out the regime occupying Quds.”

On 24 March, the commander of the Iranian army, Major General Abdolrahim Mousavi, reiterated a statement he had made months ago, on assuming command in 2017:

Referring to a comment by the Islamic Republic’s Supreme Leader, Ayatollah Ali Khamenei, Major General Abdolrahim Mousavi said, “We will finish off Israel’s life within less than 25 years.”

Saturday’s statement makes at least the second time Mousavi has forcefully echoed the same sentiment from Khamenei.  This time, Mousavi doubled down and threatened the Great Satan too:

Speaking to Tasnim news agency run by the Islamic Revolution Guards Corps (IRGC), Mousavi insisted on Saturday, March 24, “God willing, we will crush the US and see the Israeli regime terminated in less than 25 years.”

These comments, per se, don’t seem to be directly related to any tactical events in Israel or Lebanon this weekend.  But they’re a reminder that if Israel struck a target in Lebanon on Sunday, it was probably at least as much about Iran as about Hezbollah.

Worth noting as well: near the same time Iron Dome was reacting in Ashkelon on 25 March, the Iran-backed Houthi rebels in Yemen launched as many as seven ballistic missiles at the Saudi capital of Riyadh.  The Saudis used Patriot interceptors to protect the capital, although we don’t have a count of how many were fired, or how many incoming missiles were taken out.

It appears that the Houthi missile barrage was launched at Riyadh an hour to an hour and a half after the Iron Dome episode in Ashkelon, and that it occurred close to the time the IAF strikers would have launched from their airfield, assuming they did actually attack something in Lebanon.

Iran is embedded in Syria, and has paraded high-ranking officers through Lebanon and the Golan for terrain surveys and planning more than once in the last three years.  Iran isn’t a distant, indirect threat any longer.  What Israel – and Saudi Arabia – have to do for self-defense is already changing.