How adorable! The kid who up until a month ago was an average teenager but since he made war on the National Rifle Association has become the media darling of the Left, has blossomed into a full-service, kneejerk (emphasis on “jerk”) liberal.

On Monday, he and 15-minute-of-fame cohorts Cameron Kasky and Emma Gonzalez, took part in a fact-free Twitter event to speak about their #NeverAgain movement, which has lately come to embody everything conservatives mean when they speak of “low-information” voters.

The Daily Wire’s Ryan Saavedra posted videos highlighting a number of insane claims made by Hogg and company.

Needless to say, pro-gun Marjory Stoneman Douglas High School student Kyle Kashuv wasn’t invited to participate. This Twitchy  explained by noting that “any diversity of thought would just have bogged down the conversation, which took some odd SJW turns into things that only someone like Shannon Watts certainly would have applauded.”

Here a few “highlights” from the event:

David Hogg says it's "disgusting" that more minorities and women are not in government because "It creates this system where we have one line of thinking where it's a lot of rich white men like myself that are in politics." pic.twitter.com/wfERl0Lrov

David Hogg says white privilege is one of the biggest obstacles he's faced in his anti-gun agenda, says media wouldn't cover the incident the same way in a black community "no matter how well those people spoke."

David Hogg says the NRA is making America a dictatorship: "These lobbyist groups like the NRA, they can buy our politicians but they can't buy our voices as American citizens and we need to realize that because when we don't, we don't have a democracy, we have a dictatorship." pic.twitter.com/nEoUZGhjSU

If Hogg spent any time in school as he does making appearances on CNN, CBS This Morning, Bill Maher’s “Real Time” and other liberal outlets, he might learn that the United States is a republic, not a democracy.

In another clip, Hogg suggests that Netflix’s “House of Cards” is just like “real life.”

Despite his claim to support women, he has no problem launching into a bizarre attack against Dana Loesch, arguing moreover that he is not trying to take anyone’s guns.

David Hogg launches into a bizarre attack against Dana Loesch, he also claims that he is not trying to take anyone's guns as mentions that people only have the right to own handguns and pistols. pic.twitter.com/8GcYuTP0zO

Saavedra has much more of this unhinged and uninformed insanity here.

Keep in mind these are the children that the anti-gun Left, which includes the Democrat Party and the so-called “mainstream media,” are now hailing as “heroes.” 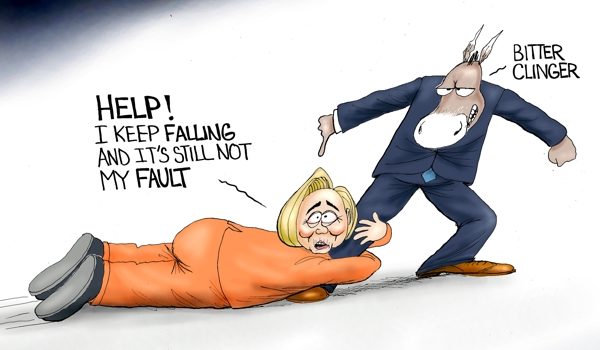