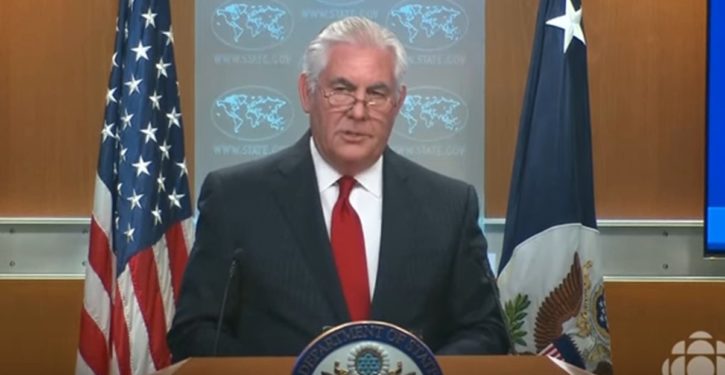 After being fired by Trump on Tuesday, Secretary of State Rex Tillerson announced that his last day in the office would be 31 March 2018.

That’s an interesting coda to the drama of the “abrupt” firing, accomplished for public consumption via a tweet from the president.  It looks like Tillerson, unlike Trump’s personal assistant, John McEntee, will at least have the opportunity to grab his coat on the way out the door.

According to Adam Kredo, former Trump adviser Sebastian Gorka says the plan to remove Tillerson and replace him with Mike Pompeo (coming over from CIA) has been in the works for months.

Sebastian Gorka, a former strategist and Deputy Assistant to President Trump, told the Free Beacon the White House had been laying the groundwork for Tillerson’s departure since at least December of last year.

“This has been in the planning phase since at least December of last year and should come as a surprise to nobody,” Gorka said. “The great things that were expected of Rex, especially in changing the America last culture at Foggy Bottom, did not happen, so this is a natural move.”

Gorka praised Pompeo’s work as CIA director and said “similar things are expected of him at the State Department.”

Besides Kredo’s main thesis – that Tillerson has been fired because he’s opposing the president on Iran policy – there’s a big clue in Gorka’s comments to help us understand what’s been going on.

It was hoped, Gorka indicates, that Tillerson would be able to “change the America last culture at Foggy Bottom.”

But he didn’t.  The implication is that that was recognized in December.

And still, Trump waited until now to fire Tillerson.

In pondering that point, it’s also well to remember that the chafing and miscues between the Oval Office and Tillerson go back much further.  Even friendly media date the disenchantment between Trump’s inner circle and Tillerson to at least June of 2017.

In July 2017, Trump was said to have set up an Iran working group with his own people, mainly to bypass the State Department.

And by early October, there were exchanges of words flaring up in public between Foggy Bottom and the White House over North Korea.

Yet it took Trump until now to fire his outgoing Secretary of State.

I believe attributing that to conventionally wonkish-sounding motives is looking in the wrong place.  That’s not how Trump thinks – and that’s what matters to assessing what Trump does.  If there’s one thing we ought to have learned by now, it’s that Trump isn’t being domesticated by his time in Washington.

Although there are policy issues for which the timing of this shift makes sense (e.g., the next reporting period on the Iran JCPOA, and the proposed meet with Kim Jong-Un of North Korea), I suspect that Trump’s tripwire is a different one.

The place to look is in the negative and pessimistic reports of how Tillerson’s State Department has fared as an institution.

This wide-ranging report at Vox on 13 March is typical:

The former Exxon Mobil CEO, whose nomination was initially greeted warmly by prominent foreign policy hands, will leave office without any major accomplishments. This is largely because he failed to wield any significant influence in internal administration debates over issues like North Korea or Russia, and in fact actively alienated the president during several key policy debates.

His push to slash “inefficiencies” in the State Department and seeming disinterest in working closely with longtime staff were even more damaging. Under Tillerson’s watch, 60 percent of State’s top-ranking career diplomats resigned and new applications to join the foreign service fell by half, according to a November count by the American Foreign Service Association.

This hollowing-out of the foreign service, combined with Tillerson’s inability to appoint people to vital positions like ambassador to South Korea, delayed American responses to major crises and weakened the State Department for a “generation,” according to George Washington University’s Elizabeth Saunders.

Well, yes.  “Weakened the State Department for a ‘generation.’”  If Trump was having to fight his State Department tooth and nail over Iran policy nine months ago, to the extent that he decided to just bypass it in drafting a new strategy, do you think Trump regards that as a bad thing, or a good one?

There have been numerous reports over the last year about the Washington bureaucracy languishing in the Trump administration, understaffed and underemployed.  Those reports have prominently included the State Department.  (See here, here, and here as well.)

I don’t think that’s because Trump is either indifferent or incompetent.  I think it’s because the only way to force the State Department to stop being an obstacle to his policies was to remove its teeth and claws.  That had to be done by attrition.

It served Trump’s long-term purposes to let Tillerson run a State Department that Trump couldn’t really use, for as long as it took to break the old paradigm.  As far as Trump is concerned, he doesn’t need to be corralled, shaped, outmaneuvered, or boxed in by his State Department.  He has a constitutional right to tell the State Department what U.S. policy will be, rather than vice versa.

A year ago, the State Department was a prominent element of the anti-Trump “resistance.”  Now it’s basically just neutered.

One way we know that is that there is very little being “leaked” from the State Department today.  During the Obama and Bush 43 years, it leaked like a sieve.  A year into Trump’s tenure, it doesn’t know enough to leak very much.

I’ve watched Trump at work doing “politics” for over two years now.  In assessing what he’s doing, it’s essential to recognize how he operates, and not keep trying to overlay the institutional conventions and expectations of Washington on his actions.  He needed a State Department that would stop trying to thwart him on key policy issues.  Now he’s got one.  It’s time to move Pompeo in, and start repopulating Foggy Bottom. 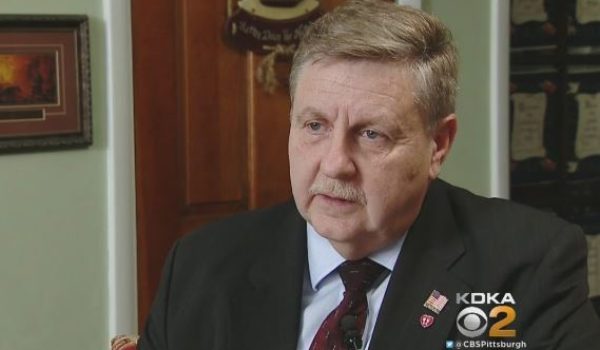