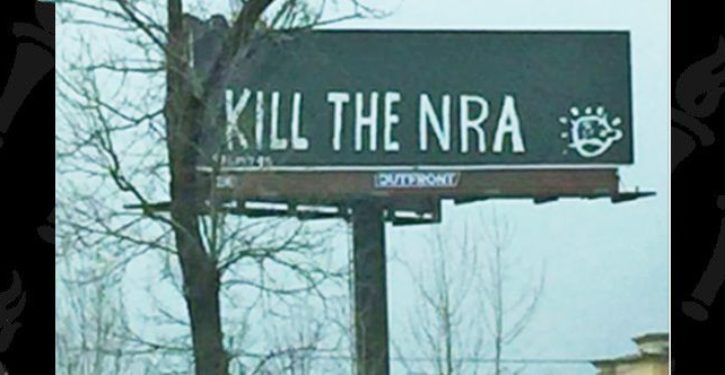 Liberals could tear up an anvil with a banana! Everything they attempt to do blows up in their faces like a gag cigar.

The Left figured it could launch an all-out offensive on the NRA, making it the villain in the Parkland, Fla. school massacre, even though its law-abiding members had nary a thing to do with the tragedy. It plays well with the mouthbreathers who are actually stupid enough to listen to them, so why not?

Guess who benefited most from the Left’s attacks on the NRA. The NRA! Since the events of the latest mass shooting unfolded, membership interest has skyrocketed.

As can be seen in the graph below, Google searches for “NRA membership” have increased 4900% since the week before the tragic shooting at the Parkland, Florida high school.

According to the Daily Mail, “Some otherwise casual gun rights supporters said that the loud attacks on the NRA in the media by young Parkland survivors such as David Hogg drove them to sign up.” One woman went so far as to tweet a thank you to the 17-year-old whose star is rising on the Left:

Thank you David Hogg for inspiring me. I gifted my husband with an NRA membership. I felt now was an important time to support them. pic.twitter.com/3hWDzLQuVq

While liberals will paint such reactions as cold-hearted, it is because of their own staunch refusal to acknowledge the harsh realities surrounding the Parkland shooting. One is catastrophic failures on the part of local and federal government to disarm the shooter, Nikolas Cruz. And if the Left is looking for a president to blame, they should refocus their sights on Barack Obama, whose efforts to defang school disciplinary policies have made the nation’s schools far more dangerous.