Traditionally, bathrooms and locker rooms have been segregated based on sex. But in 2016, the Obama administration issued a controversial “Dear Colleague” letter telling America’s schools to allow students to use whatever bathroom corresponds with their internal sense of “gender identity” — including transgender students who identify with one sex, but inhabit the body of the other. Its argument was that a person’s sex is defined by her “internal sense of gender,” not her biology.

But where did this notion come from? It is so radical and contrary to longstanding usage that even a few years ago, it would have been rejected by transgender people themselves. Hate crimes laws and antidiscrimination ordinances treat “sex” and “gender identity” as two different categories, with the latter encompassing transgender people, and the former referring to people’s anatomical and biological identity (as opposed to state of mind). Moreover, to be “transgender” is not the same as to be “transsexual.” A transsexual has had a sex-change operation, while a transgender person just shares traits and behaviors with the opposite sex, while retaining the body of the sex she was born with.

Even transgender activists long admitted that “sex” and “gender identity” are two quite different things. One of the earliest activists was Virginia Prince, an anatomical male who dressed and lived as a woman. In 1969, Prince proclaimed, “I, at least, know the difference between sex and gender, and have simply elected to change the latter and not the former. If a word is necessary, I should be termed ‘transgenderal.‘” (See Virginia Prince, Change of Sex or Gender, 10 Transvestia 53, 60 (1969), quoted in Richard Elkins & Dave King, The Transgender Phenomenon 82 (2006)).

The Obama administration’s “Dear Colleague” letter purported to apply the Title IX statute, which was passed in 1972. That statute bans discrimination “on the basis of sex” (20 U.S.C. § 1681), but contains an exemption allowing separate facilities “for the different sexes” (20 U.S.C. § 1686), which the federal government in 1975 enshrined in a regulation permitting separate bathrooms and locker rooms “on the basis of sex.” (34 C.F.R. § 106.33).

Even if some politically-correct dictionary today were to equate “sex” with “gender identity,” none did so in 1972, which is what matters. Under Supreme Court precedent, the term “sex” in Title IX is supposed to be given its dictionary definition as of 1972 — not today. For example, the Supreme Court ruled that the meaning of “clothes” in the Fair Labor Standards Act was based on its dictionary definition generations earlier when the statute was enacted — not in 2014, when the Supreme Court finally got around to interpreting it. (See Sandifer v. U.S. Steel Corp., 134 S. Ct. 870 (2014)).

This principle also applies to civil-rights statutes like Title IX. For example, the Supreme Court interpreted the meaning of “race” in a post-Civil War discrimination statute, 42 U.S.C. 1982, as having its meaning when it was enacted soon after the Civil War — not its meaning today. The result was that Jews, who were considered a different “race” in the late 1860s’s, were covered by the statute, even though it only bans racial discrimination, not religious discrimination. The Supreme Court ruled that what matters is not how we define race “today,” but how “race” was defined back when the statute was passed:

the Court of Appeals erred in holding that Jews cannot state a § 1982 claim against other white defendants. That view rested on the notion that, because Jews today are not thought to be members of a separate race, they cannot make out a claim of racial discrimination within the meaning of § 1982. That construction of the section we have today rejected … definitions of race when § 1982 was passed were not the same as they are today … the question before us is not whether Jews are considered to be a separate race by today’s standards, but whether, at the time § 1982 was adopted, Jews constituted a group of people that Congress intended to protect. … Jews … were among the peoples then considered to be distinct races, and hence within the protection of the statute. Shaare Tefila Congregation v. Cobb, 481 U.S. 615, 617-618 (1987).

Even if you assume (counter to reality), that the Obama administration was right to equate “sex” with “gender identity,” its interpretation of Title IX as commanding bathroom access by the transgendered on the basis of their “gender identity” was wrong, because it would thus create an entitlement “on the basis of sex” (as a former Justice Department lawyer explains at this link.). That makes little sense, because civil-rights laws such as Title IX never require discrimination in favor of people based on their sex, and generally forbid discrimination “on the basis of sex,” except in bathrooms, locker rooms, etc.

ICE: Illegals warned by Oakland mayor included child sex and weapons offenders, among others
Next Post
Australian who tipped FBI on Papadopoulos had tie to Clintons 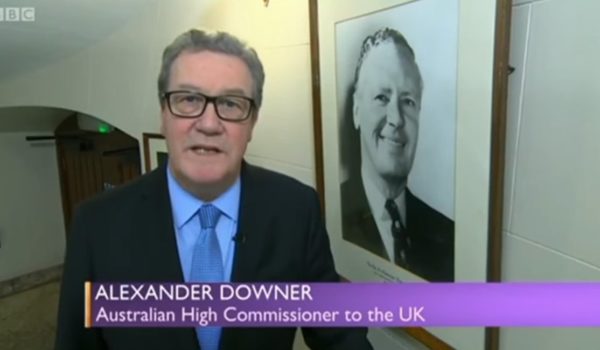